Between the extreme slopes of the Apuane Alps and the Versilia coasts the territory of the Commune of Massarosa is extended. Crossed from the National Road n. 439 Sarzanese-Valderas and from the Lucca-Viareggio highway A11, to the low limit of the necks, where today, next to the old countries, industries and new lived centers bloom, it guards in the silver of the oil you exceptional panoramic zones as Mommio Castle, Corsanico, Bargecchia, the passes of the Quiesa, of the street of Balbano, of the Parish to Elici and the summits of Gualdo and Montigiano.
Of rare and delicious beauty they are also the " pits " and the marshy islets of the Lake of Massaciuccoli, tied up to the memoirs of the music pucciniana. It is this one natural environment sufficiently protected, (its area is inserted in the Natural Park of Migliarino, St. Blush and, note, Massaciuccoli, a swampy zone, rich of flora, with some really rare kinds, if not only, that can be admired crossing the so-called clear to edge of characteristic wherries to oars. On concession of the Consortium of the Natural Park, a delegation of the L.I.P.U. (Italian league for the Protection of the Birds) has realized an oasis bird-watching. In this exceptional environment, the most remote presence of the man is testified by archaeological finds, recovered in place St. Rocchino from the excavation of the flinty sands and that they go up again to the middle paleolitico; the area is not exposed, neither enjoyable for cultural visits.
Other zone of prehistoric finds is constituted by the Caves of Mommio, while the open material to Field Casali and to Montramito it furnishes a valid test of appropriations liguri of the VII century and of Etruschi in the following centuries. The flower to the buttonhole of the historical vestigias is the fraction of Massaciuccoli, where the Roman epoch has left imposing traces that can be admired today still; they are found, in fact, the ruins of the Thermal baths and the Villa, besides ceramic documents that go from the II century a.C. to the III century AD and that they are preserved in the local situated Civic Museum between the rests of the Roman Villa and the Thermal baths. To remember that illustrious men as Of announcement, Of Azeglio, Correct, Manzoni, Pea, Rosmini, besides the teacher Giacomo Puccini, they sojourned on this earth massarosese often singing the harmonious beauty of it.

The Romanesque church of S. Martino of Bargecchia has been built to the beginnings of 1200. The first sure news has existed since 1234, in the official catalogs is named only in 1260. Realized in open stone can perfectly be observed preserved the side of west and the walls that embrace the apse demolished for a long time. The floor of the church is situated to two meters and a half bottom that actual.
The church measures mt.5,90 of width and mt. 17,70 of length. The style that Romanesque with the altar and the apse to east, the ceiling was made out of staid open wood above a frame of cooked. The principal door looked at west and it was surmounted by a small circular window. The church had covered of plates according to the use of the time. The four bells, of varied dimensions, the country were delivered to in 1885. It is narrated that the teacher Giacomo Puccini often came to Bargecchia to listen to the marvelous melody of the bells, that was faithfully proposed at the end of the first action of the Tosca.
From centuries the bells have been the fastest mean of communication for the past generations. Surely tied up to the faith, but always to the service of the people. The bells announced the great events, the beginning of a war, its end, the dangers, the invasions, articulated the hours and they put in alarm for the storm. Nowadays, the sound of the bells has been recorded and divulged by loudspeakers that they don't reproduce that original.
The actual church:
In a 1690 document it is started to speak to build the new church because the old one needs reparations. Projects and records, registers or books of file that show with precision the beginning of the construction of the new church don't exist, but a letter of the 1840 of the governor of the Regal harbor and Commissioner of the city of Viareggio it invites assembly the heads of family to discuss the enlargement of the church and a 1842 sheet with the entrances and the expenses for the construction of the church they make to think that within that decade is initiated the jobs. To his inside polittici of the XIV and XV century, great pictures, marbles and 1500 silvers can be admired, interesting works 1700 wooden and valuable processional lamp-posts.

THE CHURCH OF S. MICHAEL ARCHANGEL OF CORSANICO 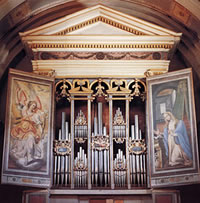 Of the 1270 ancient construction the bell tower remains, only retained national monument, while the church is modern having been rebuilt in 1848. The importance that the church of Corsanico had in the past centuries is confirmed by the existence of an ancient baptismal source. There are no anterior documents to the 16° century, because many were removed or lost to the time of the descent of Charles VIII (1494), and the little remained must be destroyed subsequently to a fire developed him in the Parish file for the fall of a lightning.
From the registers that they are still preserved, riferentesi to the following centuries, results that of it uninterruptedly Viareggios were served up to 1661, Stiava up to 1823, Pedona up to 1841, Bargecchia up to 1905 and Mommio up to 1939. E' of recent date, and precisely of the year 1946, the elevation of this famous church to the title and the honor of Parish, worthy recognition of his ancient spiritual dominion. A beneficent institution also it of ancient origin and that a particular sign deserves it is the Brotherhood of St. Michael Arcangelo, risen to Corsanico in the XV century.
In 1807 all the mobile and immovable good of the Brotherhood came indemaniati in virtue of the decree napoleonico that ordered the suppression of the institutes and the religious comparisons and the forfeiture of their patrimonies. The organ of the Parish had not been born for church of Corsanico, but had been built, between 1602 and 1606, for the church of St. Francis of Lucca. Work of the organaro Venetian Vincent Colonna, cost the notable figure of 380 gold shields. The chronicles of the time inform us, on the numerous interventions and moves suffered by the tool during the centuries, up to the definitive placed in the church of Corsanico (1886). Today the organ is fully grown therefore from 829 reeds (excluded eardrum) from which the sonorous part of the organ is constituted, 225 are eighteenth-century, 82 secentesches, 556 nineteenth-century and 29 of 1881, year of the last restauration. The technical characteristics and foniche of this tool are listed among the works of art of the Office of the Cultural Good. The first concerts were developed in 1982, and beginning from 1984 punctually every summer, succedutis are him to the keyboard organists of international fame as for instance: Mariella Mochi, Yuko Hayashi (Japan), William Porter (Usa), ect.
La chiesa romanica di Pieve a Elici

The origin of this Parish, that was one of the first centers of evangelizzazione of the Lucchesia, is wound in the darkness of the tall Middle Ages; according to the tradition would be one of the Parishes founded between the V and the You century from St. Frediano, bishop of Lucca, during its vast work of rearrangement of the church Lucchese.
With to spend some years the importance of the Parish it went more and more increasing.
The church of the X, XI and XII century was not that architectural jewel yet that today we admire.
Then the Parish was constituted by four naked walls, without aisles, with the absidiola it turns to rising, and the trusses roofing covered with blackboards. Of this primitive construction, destroyed a first time from the military raids more than from the carelessness of the men, and rebuilt for wish of the countess Matilde of Canossa, no more remains out of a small line of the wall that the church closed from the side of north wind.
The amplification happened later, probably in the second half the XIII century, when the Parish grew of importance and the oratory didn't succeed in satisfying the demands of the increased population.
The renewed Parish assumed a decent and austere aspect, what it was suited to the temple of God, and such it sustained up to the first ones of the XVIII century.
The finished restaurations to the beginning of our century freed the church from the disfigurements that the bad August and the ignorance had caused her, so today we can admire the ancient work returned in all of its primitive beauty and austerity.
The visitor that crosses the threshold of it, cannot subtract him to the arcane charm that is emitted by the aisles of this Temple.
As any precise news him possegga from the builder that it conceived the renewed Parish, the lack of ornamental friezes in the lintels, in the capitals, in the shelves, it is a characteristic proper of the school lombarda.
Of this sincere stylistic simplicity, of this volute parsimony is also test the Baptismal Source to immersion, reconstructed with the old material on its original layout: in the rectangular tub, the inhabitants of the place and the neighboring zones were baptized, not only but also those of the underlying lowland, inclusive Viareggio, when this city was still a small bleak suburb of humble and poor fishermen.
A magnificent Trittico in marble detaches above after all to the median aisle ,al of the greatest altar.
The figures of the Trittico represent a Madonna with Child to the center, St. Pantaleone to the right and St. Giovanni Battista to the left. The side altars are surmounted by two magnificent frescos: a Madonna with Child and a crucifixion, that respectively go up again to the XIII and the XVII century.
The first one, work of clear Romanesque invoice, is one of the little frescos, everything now existing, of the end of the XIII century, the other, an authentic masterpiece, attributed to Guido Reni.
Main point is also the bell tower with its blackbirds Ghibellini, it was erected in the century IX as tower of watch and sighting.