The town of Montaione is in the province of Florence, but it is at an equal distance from all the most important cities in Tuscany. 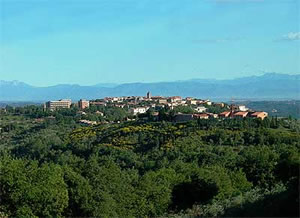 The town of Montaione is in the province of Florence, but it is at an equal distance from all the most important cities in Tuscany. It is sete at 342 m. of altitude and it has a population of 3,400 inhabitants.

Sightseeing in Montaione
The urbanistic planning of the old town is simple, based on three parallel streets: here the Praetorian Palace (14th century) is prominent: on the façade there is a number of old municipal stone and glazed terracotta coats of arms. Inside are located the Civic Museum and the Historical Archive.
Important is the church of San Regolo once dedicated to San Bartolommeo , dates back to the 13th century and contains a valuable painting (Madonna with Child, 13th century) attributed to a follower of Cimabue.
In the territory of the municipality of Montaione there are places of historical and artistic interest.
On the road to Gambassi, 1 km far from the town, you find Villa Da Filicaja. It stand on the site of the roman Figline and it was presented to the poet Vincenzo da Filicaja (17th century) by the Medici family along with a great deal of land and house in the town.
Not far away, at 2 Km from Montaione is the Roman Cistern. It goes back to the 2nd century b.C. and it is 27 meters long and 3 wide, divided into three rectangular sections and contained 400 cubic meters of water coming from the springs of Poggio all'Aglione. 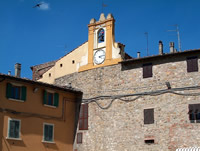 One of the most important monument of Montaione is in San Vivaldo near the monastery and called the Holy Mount or Jerusalem of Tuscany, a series of chapel and little temples, created by Father Tommaso of Florence and which represent the Passion and Death of Jesus Christ.
The district of Iano, famous for its onyx quarries and for the working of precious stones, is found 4 Km from San Vivaldo along the Via Volterrana in the valley beneath the ruins of the medieval castles of Pietrina and Vignale.
The village and stronghold of Castelfalfi, on a spur of a steep hill, were founded around 700 by the long bard Faolfi (hence the name 'Castrum Faolfi' which later became Castelfalfi ).

Hiking path in Montaione
Montaione has a network of hiking paths (some of which can also be covered on a mountain bike) which run throughout the territory of the Municipality.
The paths are organised along 6 itineraries, mostly ring shaped, and have been studied so as to allow the visitor to discover most of the territory, enjoying the areas, the forests and the slopes which, until a few years ago, were known only to hunters and mushroom gatherers. They follow the tracks of the ancient farm roads, of paths once used by wood cutters and shepherds. There are two good reasons to keep this network in good shape: first, to preserve the historical memory of place names, and second, in order to be able to reach the deepest forest areas quickly to reduce damage due to summer fires. The paths are of different length, and with many degrees of difficulty.
They are marked by progressive numbers, which are written on metal signs all along the route, together with other white and red painted markings. At the beginning and end of each ring, there are metal signboards showing the features of the path: how it can be covered (on foot, on mountain-bike), where it starts and where it ends, the distance in Km, the total altitude difference in metres, and the time it takes for an ordinary walker.
The paths also cover different kinds of areas. Some go deep into the forests, some along the rivers at the bottom of the valley, others along the crest of the hills providing limitless scenery. It is important to stress that the paths often go through private property, or near places providing accommodation. Walkers are therefore invited to respect the privacy of the guests and owners, behaving civilly.
The paths are shown on a 1:25,000 scale map (Itinerari nel Verde) and described in detail in a chapter of the guide "Montaione - Il Paese del Turismo Verde" (Edizioni Tosca s.r.l. - Fi- -1996). These publications are on sale in Montaione at paper shops and tobacconists, and in some specialised bookshops in Florence.
Following is a short description of the paths. Those who are interested would do well to call the Economic Development Office of the Municipality to ask about their state. The number is 0571/699254.