The town of Montecatini Val di Cecina is in the province of Pisa in its homonym valley. 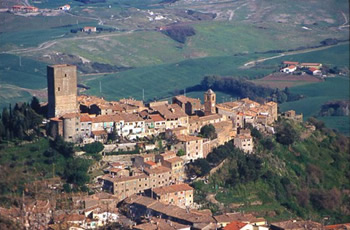 The town of Montecatini Val di Cecina is in the province of Pisa in its homonym valley. It is set at 416 m. of altitude with a population of about 2000 inhabitants and keeps numerous architectural structures dating to the medieval period.

In effect, it is possible to visit the "Piazza del castello" in Montecatini Val di Cecina. The church of San Biagio, raised in 1356, and the XIV-century Palazzo Pretorio, having a porch with arches and vaults set on columns in Ionic style, are set here. Moreover, the Tower Belforti, built shortly after the year 1000, overlooks the square. In the nearby Sassa, the stone that keeps "Christ's footsteps" can be observed. According to the legend, Christ appeared to Peter who had looked for a refuge in those places to avoid Roman persecutions. 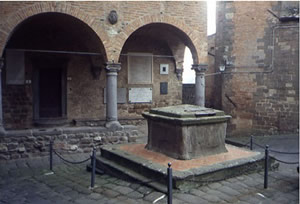 The presence of the Romans was testified by the some finds on one of the hills along the road from Montecatini to Volterra. This places was re-named "Camporomano" where many findings showing the rising of a big military camp were unearthed. On the basis o the objects that have been discovered, this hypothesis is very realistic. In effect, the Romans could have chosen this area either during a campaign against Volterra, one of the most powerful Etruscan cities, or for the abundance of minerals on the hill.

The castle of Montecatini was built around the half of the X century with the name of "Castrum Montis Leonis" as established by the Belforti, direct feudatories of the German emperor Otto I who followed him and had come from the North to settle those places. Yet, the first document about the presence of the castle dates to 1099. Thanks to this document, a bull issued by Pietro, the Bishop of Volterra, we learn that at that time the castle was within the jurisdiction of Volterra's Episcopal curia. 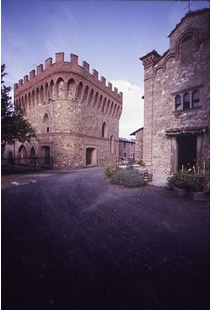 After entering the "comunitas" of Gabbreto in the XIV century, Montecatini became one of Volterra's direct properties in 1351. Its geographical distance from Pisa caused the territory to be marginally interested by the battles that had involved many towns of the Pisan territory against Florence since the beginning of the XV century. In effect, only in 1472 the Florentines conquered the town when most of the modern province of Pisa had been under their dominion for more than half a century.

Another characteristic that distinguishes Montecatini from the majority of the Tuscan towns was that it had to wait for the Kingdom of Italy to experience a real phase of economic and demographic growth. In effect, in the majority of cases many centres benefited from the reforms carried out by the Lorraine grand dukes in the XVIII century. In Montecatini, instead, the development of mining activities increased the turnover of the village. Unfortunately, the closing down of copper mines at the beginning of the XX century inexorably inverted this positive tendency.