Montelupo Fiorentino, as the name suggests, is situated just a few kilometres from Florence itself. 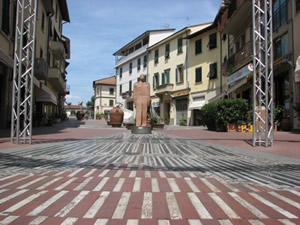 Discovering a land rich in heritage
Montelupo Fiorentino, as the name suggests, is situated just a few kilometres from Florence itself. In view of its distinctive history, it is a place that embodies many of the typical traits of Tuscany: a love of art, quality craftsmanship, the entrepreneurial spirit of the local families, together with evocative landscapes, a passion for good food and wine and an innate spirit of hospitality.

Monuments
THE ROCCA AND THE ANCIENT CHURCH OF S.LORENZO
In 1203-4 the Florentine Republic decided to construct a fortification on the hill that dominates the confluence of the river Arno and the river Elsa. This rock was the first nucleus from which the town of Montelupo developed.
In 1270 the in the Rocca area the church of San Giovanni Evangelista was built, the patron saint of the town. To this first building a second higher one was added in the 16th century, provided with two side chapels used as a short transept.
The small abse inside the tower still preserves the frescoes by the Florentine painter Corso di Buono (Christ among the Cherubs and the miracle of Saint John the Evangelist) whereas in the entrance are two small gothic temples with frescoes by Piero di Chellino (Stories of San Nicola) painted over a previous wall decoration (matching the one by Corso).
The church subsequently lost its role as parish and today rarely serves as a church.
The walk up the steep narrow road which from the town leads to the Rocca is certainly worthwhile. Its summit overlooks the entire valley to the west of which, at sunset, the jagged profile of the Apuane Alps can be seen.
In the area, archaeological excavations have also taken place which have brought to light materials from the Middle Ages.

THE VILLA DELL'AMBROGIANA
The Medicean Villa dell'Ambrogiana, close to the confluence of the river Pesa and the river Arno, was purchased by the Medici family in the second half of the 16th century and towards the end of the 17th century it became the favourite residence of Grand Duke Cosimo III.
The layout of the Villa is square, with a wide courtyard, four corner towers and four entrance doors. The superb garden originally extended as far as the river and an artificial grotto with waterworks was created nearby.
At the beginning of the 19th century the areas of access to Villa Ambrogiana were rearranged and in 1854 the entire complex was transformed into a remand home.
The Villa subsequently housed a women and children's prison and in 1888 it was converted into a psychiatric prison which it still is today. 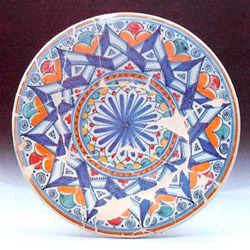 THE MUSEUM OF CERAMICS OF MONTELUPO
The new Ceramics Museum comprises an indoor area of 2.100 square metres, an outdoor area of 400 square metres and a spacious entrance hall that houses the cafeteria/bookshop .
The exhibition covers three floors.
The first room on the ground floor contains an evocative reconstruction of the so-called "pozzo dei lavatoi" as well as an ideal itinerary through the history of Montelupo's ceramics featuring large graphic reconstructions.
In the following room the exhibition of the Museum of Ceramics starts with the collections arranged in chronological and typological order.
The other rooms on the ground floor contain maiolica pieces that date back to a period that goes from the end of the 13th to the first half of the 15th century and also feature the reconstruction, on a natural scale, of a set Medieval dining table.
On the upper floor are the exhibits that date back to Renaissance times comprising a broad range of examples of classic decorations of the time.
The exhibits relative to the early Renaissance period come to an end in the last rooms on the first floor with the grottesche decoration represented by the dish called Il rosso di Montelupo, one of the masterpieces of Italian Renaissance majolica.

Surrondings
While Montelupo was the birthplace of, among others, the sculptor Baccio Sinibaldi (pupil and friend of Michelangelo), VINCI, only a few kilometres away, was the birthplace of Leonardo and PONTORME the town where Jacopo Carrucci, also known as "Il Pontormo", was born.
We suggest you start by visiting the castle of CAPRAIA which has been facing the castle of Montelupo for the last 800 years. You can then visit VINCI with its attractive historical centre dominated by the castle.
Next on the list is CERRETO GUIDI and its Medicean Villa, then the town of San Miniato, built on a hill top overlooking the Arno valley and rich in interesting monuments.
The nearby town of EMPOLI preserves part of the historical centre with its precious Collegiata. If you drive towards the Chianti area you can visit MONTESPERTOLI, an ancient town situated on the summit of a hill that dominates the stunning countryside that surrounds it.
As you might be aware of by now, central Tuscany is rich in places of great beauty and of enchanting landscapes which you will have a chance of discovering for yourself.