The Fortress dominates the center of a beautiful park. It is a strong building made of "alberese"stone in quadrangular form. 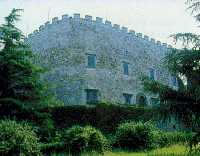 The Fortress dominates the center of a beautiful park. It is a strong building made of "alberese"stone in quadrangular form.

Since XVI century the Fortress changed gradually from a powerful military posting into a farm and rural village.

The castle, one of the oldest cores of the territory, rises on the spot of a fortified court (X-XI centuries).

In 1524 the Guidi counts were obliged to leave it to the Republic of Florence that transformed it in a bulwark of defence. 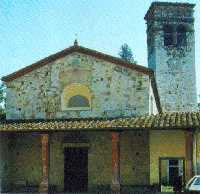 The Church of St. Giovanni Battista Decollato is romanesque in its most ancient parts and gothic in the addition of the colonnade (with a wooden covering) and of the bell tower, which originally was a watchtower.

The interior has a single nave with a truss roof.

It was built with ashlar of "alberese"and partially with green marble. It shows an architecture with mainly thirteenth-fourteenth century shapes, grown on an older structure.

Inside, with an only nave and a transept covered by wood's trusses, we can see on the wall remains of murals (XIV-XV centuries).

Next to the parish church a little but interesting Museum was annexed. It contains older sacred fittings, fourteenth century tableware and few but precious paintings.

Not far from the parish church there is the beautiful tabernacle with frescos attributed to Agnolo Gaddi.

The territory of the Commune of Montemurlois disseminated of villas and estates of ownership of rich families of merchants since remote epoches. Beginning from the XIV century when, to quote some of it, the Puccis, the Daring ones, the Ridolfi, the Gucci, the Pazzi and others run over here their capitals. The same social class of the owners realizes the presence of so refined abodes but also imposing.

The Barone's Villa (it can't be visited) has Monte Javello as background and the plain as point of ideal observation.

The Villa is among the most beautiful villas in the area and certainly it is the most imposing. It dates back to the beginning of the 16th century, when Bartolomeo Valori (called Baccio) embodied the true power in Florence.

For two centuries the story of the villa was strictly connected to the Medici, who used it as a hunting preserve.

Strozzi's Villa in Bagnolo (not visitable), preserves sober lines of the seventeenth century.

It is set off by the big park near the Villa, and it has the outward appearance of the big villa-farm, with its rural sides and its masterly and suggestive scenic effect.

The Villa Pazzi al Parugiano XVI century (it cannot be visited) was De' Pazzi family's residence and its name comes from the family name.

Before it was the stronghold of Guidi counts.

Also Caterina Lucrezia Pazzi saint in XVII century with the name of Maria Maddalena, lived many years here and she was connected with a legend.

Nowadays it has a chapel with magnificent decorations by Stradano (XVII century). 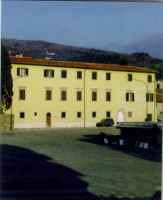 On the beginning of `500 Anthony of Jacopo of Urbano Popoleschi was owner of an ivoratte. The Popolesco, also denominated Pantano, for the marshy character of the place, it is a solid construction, from the ample ones and regulated volumes. Almost unadorned in the severe aspect, that goes up again with every probability to the beginning of `600. This villa reenters in the constructions typical of Montemurlo , whose buyer preferred to exalt, rather than the luxury, the convenience and the functionality in accord with the agrarian activities. In tuning with this discreet character it is also the oratory of the villa, devoted to St. Francis. On the altar there was a painting of Jacopo Vignali raffigurante the adoration of the shepherds with St. Niccolò and San Francis.

The native nucleus seems pits a small fortress that was damaged from Castruccio Castracani when it attached the castle of Montemurlo and it destroyed houses and towers of the surrounding territory. At the end of `500 the villa became ownership of the family Future, then of the Martin up to 1802. In 1802 the possession passed to Giovanni Baptist Pandolfini, cousin and adoptive child of Mark Covoni, known and beloved character a great deal, administrator of institutes of beneficence, and whose coat of arms adorned the rural houses that head did to the farm. After the extinction of the family Sheaves, the farm passed, for inheritance, to the Bourgeois family of Rome.

Down to the Javello mountain

In north-west of Prato, along the border of Montemurlo , characteristic hips of tectonic's origin can be seen. They are known solely with the name of Monteferrato, from which the green marble (serpentine) comes. It is used in the architectonic works of Prato and Florence.

Galceti,a hamlet near Poggio Ferrato, emerges for the quality of the environment with its Centre of Natural Sciences: a park, with faunistic oasis, and a scientific and naturalistic library.

The Museum nearby preserves archaeological and paleoethnological reports of the ¨Stazione Paleolitica Mousteriana¨ of Galceti, that are about the human life in Neolithic era (about 5.000 b.C.)

At the foot of Monteferrato the medieval village of Figline rises. It has been famous since the ancient times, for its ceramic works such as the toponym indicates (Figline: ¨ars figulina¨, that is potter's art). Also there is the church of San Pietro, an example of gothic parish.

On the lower hilled zone, where esteemed cultivations are cultivated, the Renaissance of Florence was born. In XIII-XIV centuries the Florentines families arrived there and changed their houses in comfortable villas.

These families adorned them with lodges and roof- terraces on the gardens tightly linked to the country around. Among the people that lived there we can remember the Pazzi Familiy (Villa di Parugiano), the Strozzi family (Villa di Bagnolo) and the Valori family (Villa del Barone).

On the top of the hill of Montemurlo we can see the castle, immersed in the green, in a dominant and strategic position. At its foot a little village with its walls to protect the fortress, that was a centre of a fortification's system with medieval origin. Today it is a master's villa.

The square of the village is almost a panoramic balcony on the lowland and it's closed in the bottom from the ancient Romanesque Parish church of St. Giovanni.