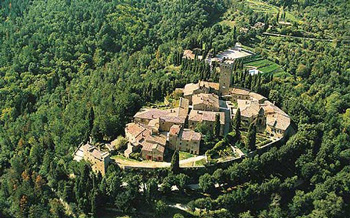 This is the birthplace of the great Renaissance sculptor Andrea Contucci called Il Sansovino and of Pope Julius III. The historic centre spreads out from the Cassero, the old fortress dating back to the XIV cent., and continues along Corso Sangallo, lined by the Renaissance Logge dei Mercanti attributed to Sansovino, to the Palazzo di Monte, today the seat of the Council, from Palazzo Pretorio with its tower, and on to the Pieve and the Church of Sant'Agostino which houses a beautiful Assunzione by Giorgio Vasari. A short distance from the historic centre is the Sanctuary of Santa Maria delle Vertighe which was already documented in the XI cent. A particular appointment in the summer is the theatrical event Teatro Popolare Il Giogo , which is held every year in Montagnano, during July.

Visit Monte San Savino :
Torre Civica
This was built by the Perugians in the XIV century and at present is the seat of the International University.

Santuario delle Vertighe
This was built in the middle of the XV century and contains an interesting painting by Margarito and Ristoro d'Arezzo Madonna con Bambino in trono e quattro storie della Vergine (XIII cent.).

Chiese di S. Agostino e di S. Giovanni
Two other very important buildings overlook the square: Saint Augustine’s Church and Saint John’s baptistry. The former was commissioned by the Augustinian Friars and built in the Gothic-Umbrian style in the fourteenth century. Sansovino added a gothic choir to the counter front in 1525. The church holds many works of art: a beautiful stained glass rose window by G. de Marcillat depicting Saint Augustine; an Assumption by Vasari ( signed ) by the high altar; various paintings by Orazio Porta among which a Nativity and a Worship of the Three Wise Men; fifteenth century frescoes by Giovanni d’Agnolo di Balduccio and P. Schiavo on the counter front and on the side walls. Sansovino was buried in this church (his tomb can still be seen on the left hand side of the nave) in 1529. Sansovino designed a cloister next to the church. Although he had to work on a very irregular plan, the results show remarkable balance and harmony.
Sansovino also made the doric portal of Saint John’s Baptistry (this church belonged to the Society of the Black Men). The entrance was originallly inside the cloister, but it was modified after 1583. Inside the Baptistry late manneristic works by local artists Orazio Porta and Ulisse Giocchi can be seen.

Pieve dei Santi Egidio e Savino
The church possibly dates from the end of the XII century and was completely rebuilt in the XVIII century. It contains the sepulchre of Fabiano del Monte, a sculpture attributed to the local artist Andrea Sansovino (XVI cent.). 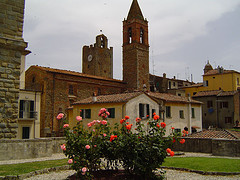 Palazzo di Monte (palazzo comunale)
The Di Monte Palace is built with ashlar-stone on the ground floor and follows the ionic order on the first, with windows having a triangular curved gable. The courtyard is encircled by an open gallery which has three arches on each side; two wells stand in the middle of the courtyard, by the shorter side of the arcade. A hanging garden, according to the wishes of Giovanni Maria di Monte (Antonio’s nephew) is to be found at the back of the building, the work of Giovanni di Baccio Bigio.
A precious sixteenth century door carved by Fra Giovanni da Verona can still be seen in the council chamber (the coats of arms of the most famous city families are painted on the walls of this chamber). The portraits of illustrious citizens of Monte San Savino and of former rulers of Tuscany (of which the most ancient nucleus dates back to the XVII century) adorn the corridors on the first floor.

Cassero
The Cassero owes its present look (Sienese depressed arches and scarp walls) to the reconstruction carried out by the Sienese when they became lords of Monte San Savino in 1383.
Monte San Savino having fallen under the control of Florence in 1384, the lily of Florence was placed on the front of the fortress where it can still be seen.
As time went by, the fortress lost its purpose and housed a pawnbroker (end of sixteenth century) then a poor people’s home up to 1960. Entirely renovated in the seventies, the Cassero is now the City Museum, displaying ceramic vessels and various works of art, among which is a carved and painted Sienese wooden crucifix dating back to the fourteenth century. The premises are also used for temporary exhibitions and for public lectures.