The town of Montescudaio lies on the first coastal hills that rise from the Cecina seashore but it is included in the province of Pisa. 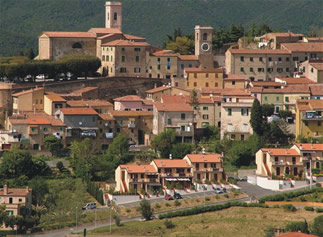 The town of Montescudaio lies on the first coastal hills that rise from the Cecina seashore but it is included in the province of Pisa. It is set at 242 m. of altitude and has a population of about 1200 inhabitants. The church of Santa Maria Assunta, the Guardiola Tower and Villa Pucci can be visited in the town.

Originally, Montescudaio was a Benedictine monastery and it became an important medieval village because of its strategic position. Even though there are some archaeological finds that demonstrate the passage of the Villanovan civilization, the first document about the complex of Montescudaio dates to 1092. With that act, the Count Gherardo della Gherardesca gave the Benedictine nuns, living in the convent he himself founded, the church of Sant'Andrea. Even if they lived in Pisa, the counts took care of the events regarding the monastery assiduously and they had the right to elect the Mother Superior of this order. 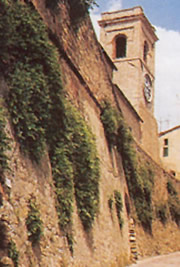 The area of Montescudaio had always been under the influence of the Gherardesca, whose members often were the vicariates of the upper Maremma. Despite living in the chief town, the counts did not hesitate to rebel against the Republic of Pisa in any occasion, just like many other aristocrats of the Pisan territory. They offered their support to the Milanese troops sent by Luchino Visconti in 1354 and, eventually, they submitted to Florence in 1406 by offering the town its services, provided that the vicariate was given back to one member of the family.

Yet, also their relationship with Florence was characterized by numerous betrayals. In 1447, the Della Gherardesca endorsed the invasion by the king of Naples Alfonso D' Aragona. The conflict, that lasted for more than thirty years, ended with the Florentines' victory. They confiscated all the counts' properties and even their castle for revenge. The castle was definitively consecrated as an autonomous town in 1479 even if its statutes had already been issued in 1407.

The town distinguished itself for its unconditional loyalty to the town of the Medici except some disputes in the XVI century that ended with Florence recognizing the new statutes of 1538. Nevertheless, in the XVIII century, in 1648, exactly, Montescudaio was ceded as a feud to an aristocratic family, the Ridolfi. Exception made for a short parenthesis between 1727 and 1775 they remained the feudatories of Montescudaio until 1778. 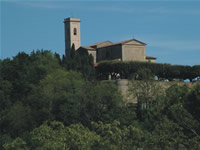 Still in the XVIII century, the historical Benedictine order was suppressed to the benefit of the church of Sant'Andrea, still present in the old town centre, and it collected all the goods of the monastery, took the title of abbey of Santa Maria Assunta and exercised its jurisdiction on the other six churches of the vicariate.