Montespertoli in ancient times, the Etruscans inhabited these lands, but Latin place names are mostly reminiscent of the numerous Roman settlements that flourished here. 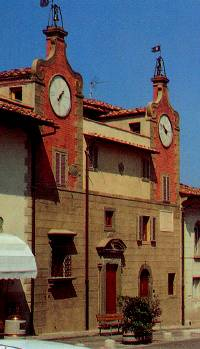 In ancient times, the Etruscans inhabited these lands, but Latin place names  are mostly reminiscent of the numerous Roman settlements that flourished here.
The presence of the Romans is confirmed by the abundance of archaeological findings, among which memorial stones in Santa Maria a Torre, in Ortimino, and in San Piero in Mercato.
The Lombard invasions were the first step towards the creation of present-day Tuscany, the 'Tuscia Longobardorum' opposed to the 'Tuscia Romanorum'.
During this period, in fact, local populations developed a road system that suited the features of the local lands, which have a geographical conformation that includes valleys interconnected by means of important roads.
The scarcity of medieval archaeological relics does not provide specific references for all the villages, but at that time Lucardo must certainly have been one of the main settlements in the area, as well as the most significant village around Montespertoli owned by the Nonantola abbey.
The Franks were replaced by the Lombards and a slow but ongoing process led to the creation of the characteristic political setup of the feudal period. Tuscany became one of the first marquisates in Italy, reaching the peak of its power before the year 1000 thanks to the Marquis Hugh of Tuscany (888 - 962), but already in the second half of the 11th century local towns started to strive for independence.
This was due to the development of new social classes such as the bourgeoisie, which would later lead to the birth of the form of local administration known as Commune or City State.
The Papacy and the Empire were the most influential political forces in the Middle Ages and all the big feoffees bore allegiance to either of the two. Meanwhile, the towns' autonomist tendencies became stronger and stronger and their power extended to the surrounding countryside, at the expense of the feoffees.
The 12th century was dominated by the struggle between feudalism and the bourgeoisie of the city states, which was the starting point for the creation of new rural communities, eager to redefine the relationships with landowners in order to be granted the participation in the government of their own communities and less unfavourable terms to regulate their farming activities. 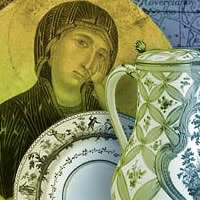 The birth of the Municipality of Montespertoli occurred within the framework of the struggle between the feudal lords and the Florentine republic, which since the beginning of the 12th century had fought for its independence, liberating itself from the imperial influence represented by the marquises of Tuscany.
Some of the feudal lords decided to move into the towns, accepting the new course of history and taking on public duties in the Republic, but others kept fighting until the final defeat inflicted upon them by the Florentine army.
The fall of the Alberti Counts and the handing over of the Pogni and Semifonte castles marked the start of a different evolution.
As soon as villages freed themselves from feudal lordship, they united in small autonomous federations, called "populi", which were under the civil jurisdiction of Florence but were so proud of their independence and of their ancient origins that, instead of referring to the city's authorities, they exclusively referred to the local parish church and its parish priest, sometimes replaced by magistrates called "rectors", elected by the citizens of each single community.
Churches were the centers of religious life, but they were also used for public assemblies, thus taking on the true role of 'Pieve' (parish church), a word which derives from the term plebs, the people's church.
The 'Piviere' was therefore the original and first form of rural municipality in the Florentine countryside around the 13th century. Later, some 'pivieri' joined together and formed the so-called "leghe di popolo" or "leghe comunali" (people's leagues or city state leagues).
The first league in the Montespertoli area derived from the union of the 'pivieri' San Piero in Mercato, San Pancrazio, and Coeli Aula, and took on the name of the first Church that was the Podestà's residence. The league had as its coat-of-arms the keys of the parish church of 'San Piero', together with the lily symbolizing the allegiance to the Lega da Firenze (League of Florence) and the star, indicating the long-established authority of the Alberti Counts in the area.

Montegufoni Castle
It was owned since 1160 by the powerful Acciaioli family, whose most famous member was Niccolò Acciaioli. At that time, the castle was a castrum made up of seven buildings, each separated from the other and used to house craftsmen and farmers, who worked for the castle's owners, and encircled by the walls surrounding the entire complex. Later this set of buildings became the castle, as we know it today, and it was further renovated in the 17th century. The first intervention by Ottaviano Acciaioli, who added forty rooms to the building in 1632, was followed by the most noticeable renovation, which would bring about the biggest changes to the castle's structure. 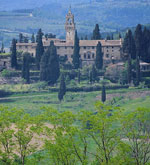 A wonderful garden was added to the villa, thus complementing its striking architecture and creating endless connections between open and closed spaces. Water games, caves encrusted with stalactites, luscious plants of different species turned the garden into a place of delight, sought after by noble families that loved to spend their time there, including the Medici family. The presence of artists, poets, and comedians, welcomed by the liberal and renowned owners of the castle, contributed to turn Montegufoni into a place of culture and refinement.
In more recent times, when the Acciaiolis no longer owned it, the castle had a different history. It was purchased by Sir George Sitwell, an extravagant member of the English aristocracy, which gave new impulse to the castle's life. Before moving in permanently, he restored the property without accepting other people's advice on how to carry out the renovation and asked Gino Severini to decorate it. The artist painted his Arlequins in the Acciaioli halls and the proposal by Sitwell's sons to let the young painter Pablo Picasso decorate the walls was turned down by the father. During the First World War, the famous "Primavera" (Allegory of Spring) by Botticelli and other masterpieces of the Uffizi museum were hidden here. Its wonderful tower was built drawing on the architectural model of the Tower of Palazzo Vecchio in Florence.

Poppiano Castle
The Poppiano Castle was an imposing medieval building with three rings of walls, built around the year 1000. It was used as a fortress for the external defense of Florence and, as testified by an inheritance document of 1199, it has belonged to the Guicciardini family for at least nine centuries. During this long period, it has been the center of many episodes linked to the history of Florence. Among the most remarkable events, in 1369 John Hawkwood, the famous English Soldier of Fortune, who had just fought the battle of Fosso Armonico, near Cascina, set up his camp in the Poppiano Castle. The Castle was partially destroyed in 1529 during the siege of Florence, as mentioned by Francesco Guicciardini in his 'Memorie'. Despite still showing its ancient magnificence, the structure of the castle, as we see it today, bears evident signs of the renovation that followed the destruction caused by an earthquake in 1812 and that was carried out on the basis of frescoes from other Guicciardini villas in Val di Pesa and Val d'Elsa, which depicted the original structure of the castle. Since the 1200s, the Guicciardinis held a key position in the political, social, and economic life of Florence and in 1416 Piero Guicciardini was nominated "Count Palatine" by Emperor Sigismund of Luxemburg. The family actively participated in Florence's public life and gave the city 44 "priors", 16 "gonfaloniers of justice" and 12 senators. The most important personality of the family was Francesco, called the Historian (1483-1540). After having held relevant posts for the Medici family - ambassador in Spain, Governor of Modena and Reggio, Leader of the League of Cognac - he moved to Florence and Poppiano, where he wrote a part of his most famous book, "Historia d'Italia".