The municipal territory of Montignoso extends for 16,67 square kilometres between the sea and the Apuane, “last land” of the low Lunigiana.

The municipal territory of Montignoso extends for 16,67 square kilometres between the sea and the Apuane, “last land” of the low Lunigiana. Ancient Lords castle, in 1938 the municipality was suppressed and became part, with Massa and Carrara, of the new community of Apuania, it was reconstituted in March 1946.

The Castellum Aginulfi, positioned on the hill near the present day centre, considered itself the first historic nucleus of Montignoso. Considered by the Byzantines as a point of great strategic importance conquered by Longobardo Rotari in the VII century, other than being restructured it became a stable Seat of Noble Guilds.

Toward the year one thousand, the Bishop of Luni had the jurisdiction over one third of the castle. In XIII century Montignoso passed under the dominion of a branch of the Lords of Vallecchia and Corvaia, who established themselves in the fortress and took the name of Nobles of the Castle. But the disputes among the powerful neighbours (Pisa, Lucca, Genova, Firenze) whose influence they could not escape, constituted the real driving force of the political events of Montignoso. Finally, with the decline of Pisa, it came under the dominion of Lucca in the second half of the XIII century, the community was annexed to the Vicariate of Pietrasanta. The jurisdiction of Lucca over Montignoso lasted even when Pietrasanta, in 1514, passed to the Fiorentini and, if one makes an exception of a bloody contrast with Massa in 1538, Montigonos’s history did not see any particular turbulence until the advent of the Napoleonic armies. The French, on the other hand left it under the government of the Lucca Princes Baciocchi, to whom they owed the land reclaims of the marshes which extended along the most part of the coast. In 1847 the community passed to the Estensi and remained under them, despite the peoples discontent, until 1859. Among the illustrious personages of Montignoso is the diplomat and politician Carlo Sforza (1872-1952).

A VIEW OF THE OLD TOWN CENTRE:
Castello Aghinolfi
It dominates all the landscape. It has been contended for century by the military forces of Pisa, Genoa and Lucca. Probably, the ancient building can be dated back to the Byzantine period, and it represents a real defence fortress.
Today, it is subject of studies about the life during the different ages: of the old structure remains a large building with an octagonal base, recently restored, and very different from the other Castles in Lunigiana.

Villa Shift Giorgini (18th -19th century)
A splendid nineteenth-century residence, and the current seat of the Municipal Authorities where numerous cultural events are held. The villa, surrounded by a wonderful park, houses many marble sculptures.

Chiesa di S. Eustachio (15th century)
Damaged by bombino during the Second World War, the building has recently been renovated. The Church bears the date 1840 on the portal, but actually dates back to 1495.
Inside you will find two paintings of the fifteenth century attributed to Maestro del Tondo Lathrop and to Maestro di Stratonica. There is also a wooden sculpture of the Pisan school dating back to the fourteenth century, portraying a Madonna.

Chiesa Parrocchiale di S. Vito e S. Modesto (12th century)
Inside you will find an altar triptych of the painter from Lucca, Michele Campanti, painted in 1482, portraying the “Madonna with Child amongst Saints John the Baptist, Vito, Modesto and Peter”. 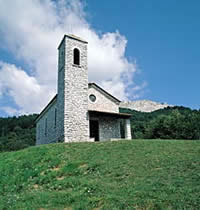 OUTSIDE THE CENTRE
Pasquilio
A mountain particularly loved by the poet Giuseppe Ungaretti, where you can find a bust of the writer Enrico Pea and where you can get a feel of the last battles along the Gothic Line of the Second World War.

NATURE AND THE ROUTES
The Porta Lake, a natural oasi run by the WWF and Lega Ambiente, where many typically species of the zone are protected from extinction. This is the northernmost coastal swampland of Tuscany, which survived the interventions of land reclamation that progressively reduced the swamps that once characterized the Tuscan coasts.
Between the Apuan Alps and the coast of the Versilia, the lake was a strategic area for controlling the coast and the main roads between Pietrasanta and Massa.

FOOD AND WINE
One of the typical Montignoso dishes is pane marocco, a bread made with corn meal mixed with some wheat flour, to which oil, olives and hot peppers are added. In ancient times this bread was baked on chestnut leaves.
Another excellent dish is “Putta” Pie, made with savoury rice with a particular tangy taste due to the presence of abundant pepper and pecorino cheese.