The municipal territory of Murlo extends for 114,79 square kilometres between the valley of the river Merse and that of the Ombrone. 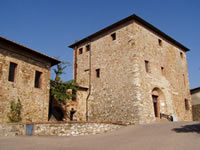 The municipal territory of Murlo extends for 114,79 square kilometres between the valley of the river Merse and that of the Ombrone. Its origins as feudal go back to at least the XII century and the first capital was probably the castle of Crevole. In 1777 the community was restructured and in 1833 the districts of Campriano, Bagnaia and Frontignano were added.
There was news of the Murlo castle from the Medieval era, but archaeological finds from the Etruscan era make it seem the territory was inhabited from that time.
In 1151 the feudal of Murlo was donated by Count Ugolino di Ranuccio Ardengheschi to Bishop Ranieri (from here comes the name of Murlo in Vescovado, used even today) and the donation was ratified in 1189 by the Emperor, even though in the following decade the presence of this singular enclave inside their county somewhat upset the governing Senese.

So for nearly two centuries the territory of Murlo was the object of bitter controversy among the government of Siena and the Episcopate, who was, from 1274, forced to concede a military obligation for his subjects to the Siena army; The contention was eased definitively in 1387 with the recognition, even if only partially, of a sort of sovereignty by Siena over the castle, whose inhabitants from then on had to pay the census at Siena and buy salt from them; however the civil and penal jurisdiction over the place remained with the Bishops. After 1554 and the conquest of the Siena territory by the Medici, Murlo continued to be subjected to the Episcopal jurisdiction until 1766 when Pietro Leopoldo decreed the suppression of feudal in the Grand Duchy.
Visit Murlo :
Palazzo Pichi Sermolli, from 1400s
Palazzo Vescovile, erected on the site of an pre-existing Abbey first Benedettina then Camaldolese.
Palazzotto Giovagnoli, of XIII century origin, with renaissance windows.
Palazzo della Residenza, constructed in the XIII and XIV centuries, from 1975 houses the Civic Museum a collection of works for the most part coming from churches of the area, but also containing masterpieces by Piero della Francesca.
Porta Fiorentina, closing Via XX Settembre, the medieval “Porta della Pieve”, the only remains of the ancient urban walls.
Fortress, erected in 1500 projected by Giuliano da Sangallo, on a preceding structure of the 1300s. In 1800 was transformed into a farm. It is private property.
Palazzo Alberti, constructed in the XVII century, has the bust of Cosimo II on the facade.
Duomo, dedicated to S. Giovanno Evangelista, initially it was the Abbey Church, enlarged and modified from 1300 in the subsequent centuries until the radical intervention of 1936-1945. The interior has three naves on columns and of Roman structure with Gothic influences, and hosts exquisite works of art.
S. Maria delle Grazie, from 1518, has a particular door from the XVI century in wood worked in basso-rilievo with little skeletons.
S. Agostino, initially the parish church of Santa Maria, it was remade in 1771 in Baroque style. The bell tower is adapted from an antique medieval tower.