Orbetello is situated in the middle of a beautiful coastal lagoon. 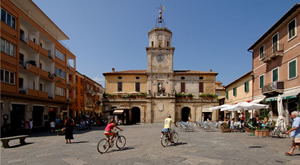 Orbetello is situated in the middle of a beautiful coastal lagoon. The small island where it stands is surrounded by the Levante and Ponente Lagoon, known respectively as the Tombolo della Feniglia and the Tombolo della Giannella, and offer visitors many kilometers of wonderful beaches.
Orbetello is a lively and busy town whose principal resource has always been fishing, in fact, local seafood recipes are widely considered to be the best in the Maremma. Today Orbetello has also become a popular tourist destination, thanks to the beauty of the surrounding sea and beaches, the splendid natural reserve, “Laguna di Orbetello” and the various comfortable and modern accomodations, including camp sites. 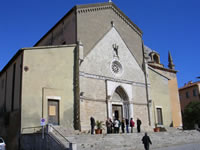 Ruins found in the area indicate that Orbetello was first settled by the Etruscans. It was then dominated by the Roman Empire, who renamed the city: Orvelus, Urva Tellus and later Urbis Tellus. Because of its particular geographical position, Orbetello has always been a desirable conquest, not only by noble Italian families, but by foreign states as well. After it passed from the Orsini family to Republic of Siena in 1555, it was occupied by the Spanish who declared it the capital of the ‘Stato dei Presidi’ and proceeded to build massive fortifications. After a long history of domination by various foriegn countries, including Austria, it finally joined to the Grand duchy of Tuscany, in 1815.
The town of Orbetello today demonstrates this amazing history with the varied but stunning monuments, which remain as testaments of the various occupations. The antique centre has obvious Roman, Italian, Spanish and Austrian influences, making it a place of significant historical and cultural beauty.
There are also many places of interest in the area surrounding Orbetello. The port of Talamone, a picturesque and unique fishing village situated on a rocky promontory, was built around a 15th century citadel, from which there are spectacular views of the coast and islands today. The modern and popular holiday resort, Ansedonia. Which is well known for its beauty and stunning archeological site of the ruins of the city of Cosa, an important Roman colony. And the “Tagliata Etrusca,” a canal cut in the rock near the Spacco della Regina. This canal, constucted in Etruscan times, holds a deep and mysterious cavern which seems almost mythological and is amazing to behold.

Discover Orbetello :
the Cathedral ,built upon the ruins of an Etruscan temple and renovated in 1375
Lungomare delle Crociere is a romantic promenade reminding the flights across the Atlantic in the thirties; La Rocca , built in the XII century.
The core of Orbetello historic centre is Corso Italia, the main road and meeting point of its inhabitants.

Natural Reserve of the Orbetello Lagoon 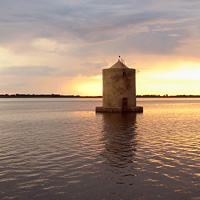 The Natural Reserve of the Orbetello Lagoon is situated about twenty kilometres north of the Lake of Burano and it surrounds completely the town of Orbetello.

This Lagoon is again marshy but fresh water flows in it and all around you will see small islands made of lime.

Orbetello Lagoon us the second one in Italy, a WWF Oasis, is situated along one of the most important migratory routes.
An untouched environment made up by the lagoon, a sandy tombolo, with the maquis, a pine grove, cultivated fields, which hosts a rich fauna consisting of about 200 species of water fowls, with pink flamingos, ducks, herons, grebes and seagulls. 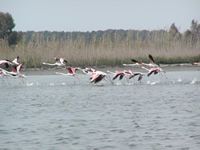 In order to admire this splendid Oasis, the WWF organizes guided tours along the “nature paths” fitted out with observation spots and huts equipped with illustrative signs.