Palaia is an agricultural zone situated on one of the highest ridges that divides the valley of Arno from the Valdera. 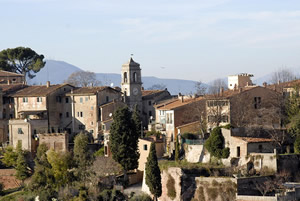 Palaia is an agricultural zone situated on one of the highest ridges that divides the valley of Arno from the Valdera.
A number of discoveries have revealed Palaia to be of Etruscan origin. It enjoyed a period of prosperity in the 13th century with the construction of the Pieve di San Martino, an original building in clay where an international coral review is held each year, and the Church of Sant’Andrea that contains valuable works of art.

The surrounding areas reveal recollections of its agricultural traditions: the hamlet of Montefoscoli is home to the Peasant Civilisation Permanent Exhibition, featuring cellars, oil mill and 'coppaio' (oil storage cells). The San Gervasio Museum of Work and Rural Civilisations displays equipment, utensils and even tractors of the past. 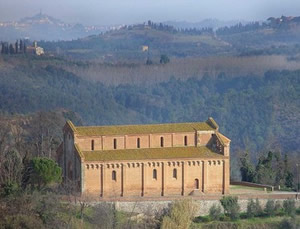 Palaia is a starting point for routes that lead through the beautiful countryside, such as the road that crosses the hamlets of Colleoli (an old castle that has today been converted into an accommodation structure), Villa Saletta (where the films La Notte di San Lorenzo and Fiorile by the Taviani brothers and Io e Napoleone by Paolo Virzì were shot) and Toiano, an uninhabited hamlet between rolling hills and harsh sandy badlands.
The Festa Medievale (Palaia, third Sunday in September) and the Festival del Teatro Popolare (Villa Saletta, end of June) are particular highlights. For anyone in search of something a little different, “Miss Cicciona”, the original beauty contest is held in Forcoli in July each year and sees ladies from all over Italy who weigh more than 100 kg take to the catwalk.
White truffles are also gathered in the area around Palaia. It is no coincidence that the first truffle reserve in Italy, Parco fluviale del tartufo, has recently been set up in this place where the vegetation and waterways encourage the reproduction of these valuable tubers.