In the town of Peccioli, founded in the Middle age, you can visit the Beyond preserving its medieval structure, Peccioli includes a territory rich in rural landscapes and ancient small villages.

The municipality of Peccioli is in the province of Pisa and it is located on a height in the Val d' Era at 144 m asl of altitude. With a population of about 4000 inhabitants, this city has many medieval buildings. The St. Verano's parish, the Peccioli's chapel and the Palazzo Pretorio are among them.
In the town of Peccioli, founded in the Middle age, you can visit the Beyond preserving its medieval structure, Peccioli includes a territory rich in rural landscapes and ancient small villages, such as Cedri, Ghizzano, Fabbrica, Montecchio, Libbiano and Legoli.
The castle of Peccioli belonged to the Gherardesca Counts. These powerful feudatories handed the fortalice over to the Episcopate of Volterra in the XII century. During those years, Peccioli appeared as one of Volterra's ramparts against the expansion of Pisa until 1163, when the latter could seize it and dominate it.

The Volterra's curia had no intention to lose its ancient property and it went under the protection of Florence after the defeat suffered by Pisa in Meloria in 1284. in exchange, the bishop got the possibility to excise duties on the copper and the salt coming from the mines of the district.
With the peace of Fucecchio in 1293, the village was eventually given back to the Pisans without its defensive walls.
The year 1406 was crucial for almost all the Pisan centres because Florence established and consolidated its supremacy over them. Peccioli had the same destiny of the surrounding areas and participated to the numerous XV-century risings. 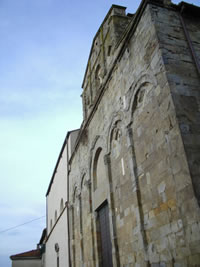 In 1431, for instance, it rebelled taking advantage from the arrival of the Visconti's Milanese troops led by Niccolò Piccinino. In the XVI century, when Florence was besieged by the Spanish militias, it harboured the Prince of Orange's troops.
Finally, it surrendered to the Medici's Tuscan Grand Duchy who were substituted by the Lorraine family until the Unity of Italy. Today, Peccioli preserves its peculiar characteristics as an agricultural centre, even though there has been a remarkable intensification of the manufacturing activity during the last century.

Galileo Galilei Astronomical Observatory
The Galileo Galilei Astronomical Observatory is run by the Galilei Amateur Astronomers Association. It only provides guided tours for groups by advance booking. Info: Commune of Peccioli.
The activity of the association includes a lecture on the celestial motions given in the planetarium, the projection of slides of the main celestial bodies, and a guided tour of the observatory. The Galilei Association has decided to expand its educational activity through a series of guided tours for primary and secondary school students. Educational paths can be chosen from a selection which is periodically updated. The list of the available subjects can be requested upon reservation. A few technical data: dome diameter 4.25 m; weight of mounting 830 kg. 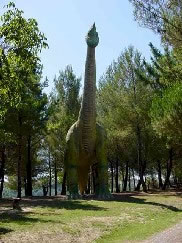 Prehistoric Park
Opening hours: September to March open daily from 9.00am to 12.00 and from 2.00pm to 6.30pm; April to August from 9.00am to 7.00pm. Admission: € 4.00; concessions for school groups € 3.00; guided tours available.
Just outside the village of Peccioli, not far from a Franciscan monastery, the Ghironi family created a Prehistoric Park after a large number of fossils was discovered in their property. The park has gained international renown with its eighteen dinosaur types reproduced life-size in fibreglass-reinforced plastic. These include the brachiosaurus, the tyrannosaurus and many others. Each specimen is accompanied by an explanatory panel describing the dinosaur''s origin, habits and the place where the fossils were discovered.
INFO: www.parcopreistorico.it