Pienza, small jewel of the Renaissance in the heart in Tuscany, in the province in Siena, to the center of one of the most beautiful zones in Italy and richer than treasures of art.

Pienza : The city
Pienza, small jewel of the Renaissance in the heart in Tuscany, in the province in Siena, to the center of one of the most beautiful zones in Italy and richer than treasures of art, it owes his name and his fame to Enea Silvio Piccolomini become famous as Pious II. Known in the tall medioevo with the name of Corsignano it was a fortress famous senese to have been mentioned in a novella of Giovanni Boccaccio. According to some historical ones its name derives from Corsinianus, one of the soldiers of Silla among which the territory trap was divided, others make to come down the Piccolominis from a Bacchus allied piccolomo of Porsenna in the war moved against the ancient Rome instead. Big part of its more beautiful architecture was made to realize really from Pious Pope II among 1459 and 1462 that is called to work to Pienza one of the most famous architects of the epoch, Bernard Rossellino, turning the suburb native of Corsignano into a splendid Renaissance town, exceptional example of architecture and urbanism fifteenth-century.
Pienza, declared by the Unesco world patrimony of the humanity for the importance of his monuments and his urban order, it also constitutes, an ideal destination for a brief stay, a relaxing vacation between culture and gastronomy, to the center of a territory for big part still uncontaminated. 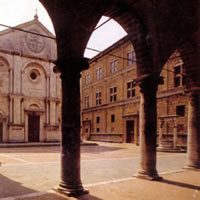 Pious II square
The small Renaissance plaza gathers around itself the principal monuments erected by Bernard Rossellino. In front of the Building Piccolomini a delicious well brings the coat of arms of this family. Turning around the cathedral a beautiful view of the Val of Orcia is discovered. The flooring riquadrata allows the observer an immediate evaluation of the distances and the proportions.
The Cathedral
It is the building that to want some Pope had to be prominent for importance and for visual impact. It rises, in fact along the side of base of the trapeze and it is the only construction isolated by the others. Its façade in travertino is in the purest Renaissance style; here elegance, harmony and proportion are united concretizing the theories of the great thinkers humanists.
To the center of the eardrum the coat of arms piccolomineo in a thin crown of leafy branches and fruits probably performed, on sketch of the Rossellino, from maestranze senesi. The octagonal bell tower introduces strong similes with those of the Austrian and German Churches. 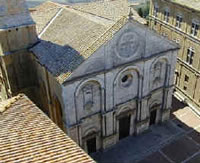 The inside three aisles of peer height, is characterized by the light that it penetrates intense from the great Gothic glass door. The style eclectic day this sacred building is strongly inspired to the Hallenkirchens of the north Europe that Enea Silvio, not yet Pope, it had the opportunity of admiring during its trips.
Among the works of the inside we remember the altarpieces, all datable ones between 1462 and 1463, performed by the greatest painters senesi of the time: (from right) Paul's Giovanni, Giovanni's Matteo, Lawrence of Pietro, says the Oldie, Healthy of Pietro and anchor Giovanni's Matteo.
In the crypt they are preserved deriving sculptural fragments from the Romanesque church of S. Maria, dejected to make place to the new Cathedral and a baptismal source of the shop of the Rossellino.
Piccolomini palace
It is the second building more main points that are leaned out on the plaza, wanted from Pious II as residence for itself and for its own relatives.
II forehead is typically characterized by Renaissance and similar architectural elements in adorns him to those of Building Rucellai to Florence, but with different concept in the proportions to avoid its excessive development in height. The southern side introduces a magnificent loggia to three orders with a splendid sight on the hanging garden, on the Val of 0rcia and on the Amiata Mountain. II Cortile interns from the perfect proportions, it is articulated by columns in travertino with capital corinzio and it is the harmonic heart of the whole building.
To the first floor, turned into museum (for the visit to turn to the custodian), the apartments are found, sumptuously decorated and furnished, that have seen, generations of Piccolomini to leave his own imprint and his own sign. Particularly interesting: the room of the weapons, the library, the study and the bedroom of Pious II.
Decentralized in comparison to the façade, on the plaza it is the beautiful well architravato in travertino, adorned by decorations to the ancient one and performed by Florentine maestranze.
Borgia Palace
Given from Pious II to the Cardinal Rodrigo Borgia, because it turned him/it into his/her own abode pientina, it reveals in the aspect his preesistenza in comparison to the other buildings. The Cardinal (future Pope Alexander Vi) it was limited to raise again of a plan this building that was the ancient building pretorio of Corsignano, replacing, besides, the Gothic windows with cruise windows and adding a beautiful portal in travertino and a delicious small inside courtyard. 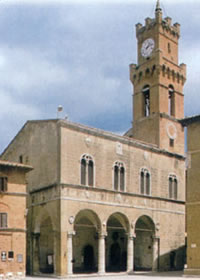 The palace is center of the Diocesan Museum. The museum, one of the greatest of the Province in Siena for wealth and number of the exposed pieces, preserve, in his 11 rooms, testimonies of the pictorial art senese from the ‘200 to the ‘700 among which painted tables of Pietro Lorenzetti, Bartolo of Fredi, of the Oldie, of the Signorelli, codes miniated of Healthy of Pietro, Flemish tapestries, silverware but above all the extraordinary Pluvial of Pious II, istoriato of English manufacture, impressive for the technical quality and iconografica of the particular ones.
The Diocesan Museum also entertains temporary shows of art and collateral events.
Town palace
Last building, in order of time, built in the plaza. The jobs in fact they began only in the second half 1462.
It is characterized by an ample loggiato supported by columns in travertino with ionic capitals, from a decorated façade with the technique of the plaster graffiti and from a tower, slowwer, in bricks, rigorously lower in comparison to the bell tower, to underline the greatest importance of the ecclesiastical power on that civil. II building is currently center of the Town administration.
S.Francesco church
It is one of the buildings more ancient francescani of Italy and it is the only monument of relief remained of the ancient suburb of Corsignano. The church, datable to the second half the XIII century, introduces a simple façade to hut, adorned by a beautiful Gothic portal and an inside to an only aisle with ceiling to capriate.Le walls, once totally, introduces only today a small number of painted images that primarily represent evangelical compositions and of subject francescano. Apse is completely covered of frescos raffiguranti, in the time, the three virtues francescane and on the walls twelve episodes of the life of S. Francesco. These as the greatest part of the other paintings, are performed by Cristofano of Bindoccio and Meo of However, artists senesi of the second half the XIV century.