The Pisa coastline stretches along the Tyrrhenean Sea including the towns of Pisa, San Giuliano and a small part of Bocca di Serchio. 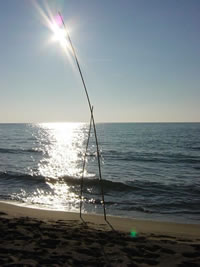 The coast stretches along the Tyrrhenean Sea including the towns of Pisa, San Giuliano and a small part of Bocca di Serchio. The entire coast to the south of the Arno is built up by the towns of Marina and Tirrenia.
At Tirrenia the beaches are still quite extensive and are protected by a strip of pine trees. In late spring rock roses and brooms greet the first swimmers with their many pink and yellow flowers.

The beach was formed in the course of the millennia through the changing of the tides.
The sand dunes, which are still present, form a line of great banks almost parallel to the coastline. The most ancient of them reach a height of 18 meters and are still intact with Palazzetto Nature Reserve in San Rossore.
The flora of this environment, although it is poor in species, create some of the particular associations which determine the form of the beaches.
The marine woodcock, the fish-catching sea-swallow and seagulls are among the most common birds that frequent, especially in the summer months, the shore.

On the beach of Marina di Vecchiano in the area right behind the dunes immense meadows of composites cover the spring sands with yellow and white. Among these is the helichrysos which for some years has offered an interesting source of nectar to the bees for the production of helichrysos honey, which has a strong aromatic flavor.
The great tufts of graminaceous plants restrain the grains of sand and stop the dunes. Among these plants bloom pink flowers of the sea convolvulus (or sea bells) and the white lilies of the sea pancras appear.

Marina di Vecchiano offers visitors the opportunity to appreciate the subtle and careful integration of man and nature and at the same time enjoy a pleasant comfortable stay. The Mediterranean backdrop, Massaciuccoli Lake (the inspiration behind Puccini’s works), green rolling hills, olive groves, local produce and hospitality, makes this area a uniquely evocative and tranquil place to stay.
Beaches
The four km stretch of unspoilt public beach at Marina Di Vecchiano is set in the beautiful nature reserve of San Rossore Massaciuccoli.
Here, visitors can appreciate breathtakingly picturesque views all year round and sample some of the local culinary delights at the various bars and restaurants situated at 3 of the small public beaches.