The area of Pitigliano and far to the south of Rome is characterised by tuff stone, a hardened type of volcanic magma. 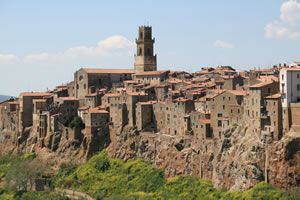 The town is situated on a steep tuff rock, 313 metres above sea-level. The area of Pitigliano and far to the south of Rome is characterised by tuff stone, a hardened type of volcanic magma. The typical Tuscan landscape with small farm houses on soft hills is rarely found here. South Tuscany is wild and many sided, similar to neighbouring Latio, the area around Rome. Small creeks have cut steep valleys into the landscape and there is a lot of woodland. Not far from Pitigliano is Lake Bolsena, a huge water-filled crater and the largest Italian lake. From Siena you can see Mount Amiata, an isolated volcano 1738 metres high, and a favourite skiing area in winter. Near the coast are extended flat zones, which were notorious for malaria contamination up to the 1930's. This was the area that was home for famous bandits like Domenico Tiburzi. Nowadays the Maremma coast 50 kilometres from Pitigliano has beautiful beaches that are hardly developed. 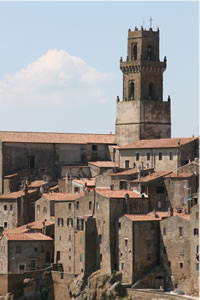 Southern Tuscany was once one of the most important centres of the Etruscans. There are numerous cave-tombs of that period around Pitigliano, caves cut deep into the tuff, that are today used as cellars and sheds. Later Pitigliano became Roman. There's hardly anything left from this period. But under the town houses are cellars in use which have lots of little niches, in which 2000 years ago the urns of the dead used to stand.
In mediaeval times, from the 9 th century on, the Langobard family Aldobrandesci ruled the region of Pitigliano. After 1312 the Orsini family took over and from 1604 the Medici's.
Of further interest is the Jewish history of Pitigliano. For a long time there was an extraordinary large Jewish community, that influenced the cultural life of the town together with the gentile population.

Museum of the: "Giubbonaia"
To the left of the city hall is the entrance to an interesting museum with old agricultural and household tools and appliances from day-to-day life, mainly used in kitchens, agriculture and viticulture. Have you ever seen a cardanic stretcher for steep fields? It's on show here. From the museum you can start an underground walk past the castle foundations and through long tuff tunnels (ask for a tour at the tourist office on the left at the entrance to the old town). 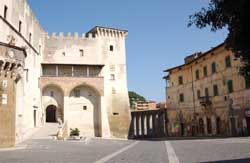 The Orsini-Castle
The castle stands at the entrance to the old town. Next to it runs the impressive mediaeval aqueduct, that supplied the town with water.
Museums Inside the Orsini-Castle is an archaeological museum, where you can see a collection of sacral objects.
Piazza On the piazza are two bars: The Bar Centrale and the Bar Italia. In the mediaeval period the level of the piazza was some 6 metres lower that today. Since then it's been raised, so that you can hardly imagine that there's a chapel in the cellar under the Bar Italia with old frescoes (unfortunately neither maintained nor accessible).

Churches On Piazza San Gregorio is a 15 th century cathedral with historic paintings by Pietro Aldo. The oldest church of Pitigliano (mentioned in 1274) is San Rocco, almost at the end of the old part of town. It has an unusual trapezoidal layout and elegant, slim travertine columns. 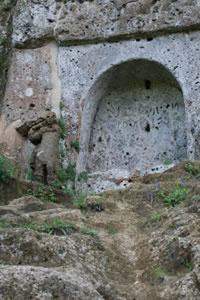 Etruscan Wall
At the end of the old town you take the steps on the right that lead to the Porta di Sovana, a medieval gate. Directly outside are the remains of the Etruscan city wall.
Synagogue Underneath the cathedral, in the former Ghetto (entrance just past the tunnel on Via Zuccarelli) you can visit the restored synagogue and the Forno delle Azzime (a disused kosher bakery), evidence of the once flourishing Jewish culture of Pitigliano.
Orsini-Park
Outside of town on the road to Sorano, just pass a bridge, is the entrance to a park created at the end of the 16th century, in which on the north side you can see statues and stone seats carved from the tuff.
Etruscan Roads
In the entire area of Pitigliano are numerous paths with walls more than 10 metres high, dug into the rock by the Etruscans. They wind down from the plateau's to the river valleys below. Some are just outside of town: Leave town through the Porta di Sovana and descend down an Etruscan path to the left, till you reach the road to Sovana. Cross the road and continue down to the bridge across the Meleta River. From there follow the Etruscan path up to the church Madonna delle Grazie.