Poggibonsi rises nearby the confluence of the Staggia torrent in the Elsa river, along the valley dividing the region of the Chianti by the Colline Metallifere. 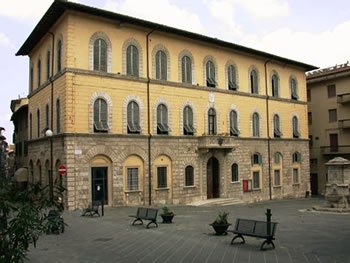 Poggibonsi rises nearby the confluence of the Staggia torrent in the Elsa river, along the valley dividing the region of the Chianti by the Colline Metallifere (Metalliferous Hills) area.
The place name comes from a compound name of "poggio" (hillock) and a German proper name of person, "Bonizo".
The first settlements in Poggibonsi formed around the Sain Michael Archangel Abbey, as testified in Filippo II Augusto's travel journal, that quoted a castle called "Podium Marturi" placed on the back way to France from the third Crusade in 1191.
The Marturi Castle rose nearby that abbey under the control of the Guidi counts and it had a great importance as road junction (check point).
In 1115 Florence invaded the territory of Poggibonsi and destroyed the Marturi Castle. Later the Guidi counts got to buid a new castle, helped by the city of Siena, that raised the interest of Florence for its strategic position.
In XII-th century Siena and Florence quarreled for a long for the control on the castle whose community had to swear faithfulness to both of the cities. During that century Poggibonsi got to take advantage of the rivalry between the two cities and by entering an alliance with the villages of the Valley of Elsa, it got such an autonomy.

After numerous events regarding Siena and Florence that were in a continual conflict to win the castle and the Montaperti battle, during which the castle was partially destroyed and later rebuilt, in 1267 Poggibonsi was invaded by the army leaded by Carlo d'Angiò who started to build a fortress.
Few years later rose a struggle between the two opposite factions of the Guelphs (Papacy's supporters) and Ghibellines (Empire's supporters) that ended in 1269 by the collapse of the Ghibellines in Colle. During that conflict Poggibonsi belonged to the Guelphs whereas Florence to the Ghibellines. Florence, conscious that Poggibonsi was an anti-guelphs stronghold, payed the captain of mercenaries Guido di Monforte so that he destroyed the castle.
In 1270 the inhabitants of Poggibonsi had to move to the lower area of the territory. 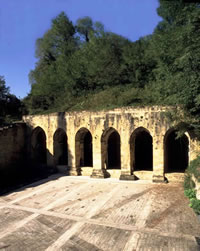 During the fifteenth century Poggibonsi was under the Florentine domain, Lorenzo of Medici, called the Magnificent, ordered in 1488 the building of a fortress, today known as "Poggio Imperiale" (Imperial Hillock), that would have represented a defensive stronghold and the birth of a new town, if the works were not stopped in 1492 by dieing the Magnificent.
During those years rose again the rivalry between Siena and Florence but after a bloody struggle, finally Florence won and got the control of Poggibonsi up to come the Lorena family to power. The Lorena's domination lasted until the Unity of Italy occurred on 1861 by the action of the King Vittorio Emanuele II of Savoia.
Among the most interesting monuments to see in Poggibonsi we point out here the Collegiata (Collegiate Church), the Chiesa di San Lorenzo (Saint Lorenz Church), la Chiesa di San Lucchese (Saint Lucchese Church), the Poggio Imperiale (Imperial Hillock) and the Palazzo Pretorio (Praetorian Palace).