Set in a pleasant spot on the Ombrone river, Poggio a Caiano is a modern town dominated by its magnificent Medici Villa "Ambra".

Set in a pleasant spot on the Ombrone river, Poggio a Caiano is a modern town dominated by its magnificent Medici Villa "Ambra". Ordered by Lorenzo il Magnifico on a plan drawn by Giuliano da Sangallo in 1484 and completed in 1514 (only after Lorenzo's death in 1492), the villa, opened towards landscape with its portico base and wide windows, represents the efforts of the renovation process which took place at this time of the Renaissance. The true heart of the building is the splendid Leone X room on the first floor of the villa, a large ball room named after the Pope Leo X, son of Lorenzo il Magnifico, which contains an excellent collection of frescoes by the Tuscan Mannerist School. Outside lie a beautiful garden redesigned in the 19th century, a neoclassic building used as lemon store and the stables. Today the villa is a national museum.

History
It is not easy to reconstruct with any certainty the history of the area from pre-Roman or even Roman times. It is believed that there was some kind of Roman settlement (such as a Roman camp or a home of the Cai family) which, according the the history of Livy, was abandoned.
This area, from texts written when Hannibal passed through on his way from Mantova to Arezzo, was described as swampy and practically uninhabitable. Other sources report that the foothills around Poggio a Caiano have been inhabited since the high middle ages.
Beginning in the 10th century, the area was owned by the Cadalindi di Fucecchio and the Olivetani monks of Pistoia. Ownership passed to the Pistoiese family of the Cancellieri who built a small fortification called Ambra. 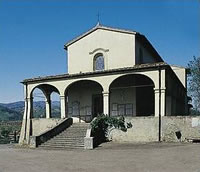 For sometime it was believed that this compound was on the exact site of the Villa, but recent studies seem to show that another palazzo, built from the original fortification is located on the main street in front of the Medici Villa, where today one finds a number of private homes. It was in this ancient house that Lorenzo stayed when visiting the construction of his new Villa.
From the 14th to the 17th centuries Poggio a Caiano was well known as the river port of Prato, and the last part of the Ombrone river from the Asse bridge (located just before Poggio a Caiano) was a very active commercial zone connecting Pistoia and Prato via the river Arno with the seaports of Pisa and Livorno.

In 1420 Palla Strozzi began to acquire land and buildings from the Cancellieri, and it is at this time we find the name of Poggio a Caiano mentioned for the first time in a few historical documents, next to the names of Bonistallo and Caiano.
In 1488 another famous Florentine family began to show an interest in the area when Giovanni Rucellai purchased the "possessions and buildings and houses of Poggio a Caiano".
The history of the city, however, has remained tied to another, even more illustrious and celebrated family, that of the Medici. By 1431 Cosimo dè Medici had bought six farms in the region. His grandson Lorenzo the Magnificent not only bought property in the area including all of the surrounding estates and began to build the Villa, but also was dedicated to the huge job of constructing flood control canals and stabilizing the banks of the Ombrone as well as upgrading farming techniques on the estates north of the river.
To this end, the wonderful example of the work of Lorenzo are the pastures of Poggio a Caiano - Tavola (a true example of the ideal farm), the construction of which would have begun in the spring of 1477. As a consequence of all the construction at the Villa and in the surrounding area, many highly skilled craftsmen moved to Poggio a Caiano, including masons, carpenters, furniture makers and the like.
This colony of skilled labor constituted the nucleus of the town that was born not as a farming community but as the factory of the Villa giving it the appearance of "city". It's location, between Florence and Pistoia, and the presence of the Villa Medici (which remained after the end of the Medici dynasty the summer home of first the Asburgo - Lorena and then of the Savoia) helped to maintain the prosperity of the small town, which later became one of the principal centers of the art of straw weaving (braids, hats, etc.), or "paglia". 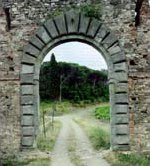 The Town
While the town is dominated by the Villa Medicea there are other notable buildings in the area with notable architectural features. The principal sites are the churches of Santa Cristina in Pilli and Santa Maria in Bonistallo, the Cerreto and the park of Barco, all situated outside of the center of Poggio a Caiano.
The Cerreto and the park of Barco is a more recently developed area with the exclusion of the strip of ancient houses along State route 66 (one of these, as mentioned before, could have been the site of the original fortified house of the Cancellieri and the place where Lorenzo dè Medici stayed during his visits to the building site of the Villa).
In particular there is the 18th century building which serves as the city hall, sitting almost at the top of the hill; the fountain called the "Mascherone", which is located at the beginning of the wall which encloses the garden of the Villa at the bottom of the hill.
In the piazza San Rosario finds the church of the same name built at the end of the 19th century and the beginning of the 20th at the urging of a special committee that asked for the seat of the parish to be moved from the less centrally located Church of Santa Maria a Bonistallo. So at the site called "il paretaio" the cornerstone of the new church was laid in 1889, and was consecrated in 1903 without the façade or bell tower in 1903.
The bell tower completed in 1911 collapsed in 1934, and the existing tower, from a design by Ardengo Soffici, was opened in 1938. The campanile's thin, elegant profile, along with the Medici Villa and the church at Bonistallo, is one of the integral elements in the panorama of Poggio a Caiano. Inside the church of San Rosario, brought from Santa Maria a Bonistallo, one finds a painting executed around 1606 "The coronation of the Virgin" attributed to the painter Alessandro Allori. The painting was restored in 1992.
To the north side of the church is the main house of the Institute of the Sisters of the Sacred Heart, a congregation founded at the beginning of the last century by Sister Margherita Caiani. 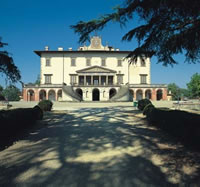 The Medici Villa
The Villa Medicea at Poggio a Caiano was built by Lorenzo dè Medici and his heirs from the design of Giuliano da San Gallo between 1485 and about 1520, with a probable break in construction from 1495 to 1513 on account of the exile of the Medici from Florence. It always remained the summer residence of the Medici, and, other than hosting numerous notable personalities, it was a stage for the important events in their history, such as the weddings of Alessandro dè Medici and Margherita d'Austria (1536), Cosimo I and Eleonora da Toledo(1539), and that of Francesco I and his lover Bianca Cappello (1579).
The Villa was a required stop for all of the newly married Grand Duchesses, and it was here they would receive the homage of the Florentine nobility before being brought to the city, as in the case of Giovanna d'Austria, the first wife of Francesco I and of Christina di Lorena, wife of Ferdinando I. In the Villa, Francesco I and his second wife, Bianca Cappello, died one day after the other from a long fever, deaths long rumored to have been caused by poisoning.

The Villa was the favorite residence of Cosimo III's son, the prince Ferdinando, a great art lover, who turned the house into an active cultural center. Upon the death of Giangastone dè Medici (1737), the brother of Ferdinando and the last descendant in the Medici line, the Villa passed to the new Grand Dukes of Tuscany, the Asburgo - Lorena, who continued to use it as a summer home and as a resting place on their trips to Prato and Pistoia. With the Napoleonic conquests, Tuscany passed into the French sphere of influence, first under the Kingdom of Etruria, and then as part of the French Empire.
The Villa underwent modifications inside and out, above all works by Pasquale Poccianti, directed by the desires of the regent Maria Luigia d'Etruria and then by Elisa Baciocchi Buonaparte, sister of Napoleon, and who was from 1804 the princess of Lucca and Piombino and from 1809 the grand duchess of Tuscany. Poggio a Caiano became one of her favorite residences and it seems that it was here she hosted her presumed love affair with the celebrated violinist Nicolò Paganini, who gave a number of concerts in the theater of the Villa. With the Restoration, reordering and repairs of the Villa followed, works sponsored by the establishment of the kingdom of Italy and the coming of the Savoia.
When Florence became the capital of Italy, King Victor Emmanuele II, a lover of horses and hunting, redid the Villa, constructing new stables, having a few rooms on the ground floor redecorated and converting the grand hall of Pope Leo X on the second floor into a billiard room. 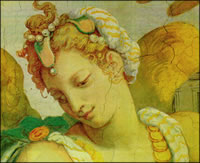 The King was joined at the Villa by Rosa Vercellana, also known as the "bella Rosina", a commoner from Turin and mistress of Vittorio and later his second wife. As testimony of this latest love story that played out at the Villa are two beautiful bedrooms which one can visit on the second floor. In 1919 the administration of the royal family donated the Villa to the Italian Nation.
The stables and the pastures of Poggio a Caiano - Tavola were transferred instead, in the first year after World War I, to the Opera Nazionale Combattenti e Reduci (National Veterans Administration), and later sold to private parties. 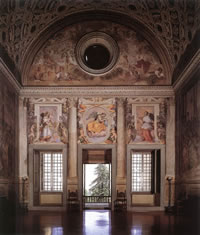 Adjacent buildings and gardens
Next to the Villa there are several buildings such as the chapel (where one finds the "Pietà with Saint Cosimo and Saint Damiano" painted in 1560 by Giorgio Vasari), the kitchens (for which one finds the initial plans in drawings from 1610) and the neo classical greenhouse or limonaia "with adjoining water reserve", another work of Poccianti from around 1825.
Around the middle of the 16th century, under Cosimo I, Niccolò Tribolo reworked the gardens and completed the stables (1548). The view of the Villa together with the new arrangement of the garden and the stables after the work of Tribolo is depicted in one of the famous lunettes of Giusto Utens painted in 1599 for the great hall of the Villa Artimino, now found in the Museum of Florence "Com'era"(How it was).

Poggio a Caiano: discover the surroundings