The village of Pomarance, whose origin is prior to the year 1000, preserves its structure of medieval castle with walls and access gates. 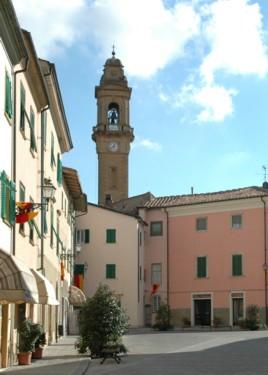 The village, whose origin is prior to the year 1000, preserves its structure of medieval castle with walls and access gates.
The view on the "caves" is particularly impressive : it is a phenomenon subject to landslides similar to the cliffs in Volterra, which has swallowed up the most ancient buildings over the centuries. The Romanesque church (XII century) keeps its austere original façade, while the interior readapted between the XVIII and XIX century still preserves a nave and two side aisles and is enriched with frescos and valuable works of art.
The theatre of the "Coraggiosi" dates back to the XIX century: it has been built according to the canons of the Italian classic theatre, shaped like a horseshoe with the stalls and three orders of boxes. Recently restored , it has become a place for shows, concerts and cultural events. There are several courtly palaces of the same period which flank Via Roncalli.
Among them Casa Bicocchi, a perfectly preserved residence with a complete furniture and open to the public; Palazzo de Larderel with a neoclassic style, once owned by the de Larderels, a family who started up the exploitation of the boraciferous fumaroles; Palazzo Ricci which houses the town hall library and an interesting collection of ceramics of Pomarance dating back to the XVI and XVII century.( In the library you will find an Internet point and a reading and book loans service).
At Pomarance you can find a manège with a riding school, a wellbeing centre, tennis and basketball courts also available during night time. There is a supermarket as well as shops of many kinds. There are restaurants both in the village and in the nearby hamlets where you can taste characteristic
dishes of the area.

Destinations for excursionists of a particular interest nearby our farm holiday centre are the following: la Rocca Sillana, which is an impressive and charming medieval fortilice with night lighting; the sanctuary of Berignone with the typical flora and fauna of the maquis; the Cecina river, into which you can dive, all in a natural wild and incontaminated environment.
There is also a place of exceptional beauty called "Masso delle Fanciulle" (literally "Maidens’ rock"), whose story is connected to a legend.
At Pomarance you can find a manège with a riding school, a wellbeing centre, tennis and basketball courts also available during night time.

Excursions to nearby places.
Larderello is right in the centre of an area called " The Devil’s valley". The Ancients thought that deep inside the earth was the Hell, from which plumes of smoke appeared on the surface. The exploitation of steam began during the XIX century and nowadays it is going on by means of cutting-edge technologies for the production of electric power and district heating. The landscape is marked by huge pipes which carry the steam to the power plants and by refrigerating towers forming altogether an unusual atmosphere.
The visit to the museum is particularly educational and the opening of a fumarole shows the released endogenous power.
There is a large number of villages on the surrounding summits which have kept their ancient aspect and whose name gives you a clue to their story: Castelnuovo e Serrazzano, hamlets surrounded by chestnut woods; Montecastelli with The Museum of Rural Civilisation and San Dalmazio and its medieval castles with Romanesque parish churches; Montecerboli, an ancient castle placed on a cliff; Montegemoli, a village with walls and towers wellknown for the production of highly appreciated wholemeal bread and for its Christmas cribs which are prepared every year along the streets , inside and outside the village;
Micciano and Libbiano of Roman origin and nearby the sanctuary of Monterufoli; Montecatini Val di Cecina where it is possible to visit the Museum of the Mine, from where until not long ago copper was still extracted with its original eighteenth century galleries and the "Alfred well" with its impressive digging machine.
You can also make an interesting excursion to the Prehistoric Park of Peccioli.