The Municipal territory of Poppi in the Valdarno Casentinese, extends for 97,03 square kilometres from the ridge of the Tosco-Romagnolo Apennines to the valley bottom crossed by the Arno. 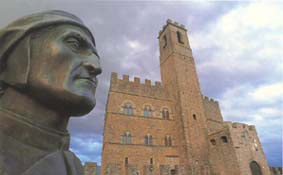 The Municipal territory of Poppi in the Valdarno Casentinese, extends for 97,03 square kilometres from the ridge of the Tosco-Romagnolo Apennines to the valley bottom crossed by the Arno, between plains, hills and mountains. The centre is situated on a terraced hillock from which it dominates the Campaldino plain and the high valley of the Arno. Feudal to the Counts Guidi of Battifolle, it then became a Vicariate Seat.

The first historical record of Poppi goes back to 1169, when it was cited in a document belonging to the Abbey of San Fedele di Strumi, but the most significant act was in 1191 :in a certificate by Emperor Arrigo VI with which many Castles between Romagna and Toscana became confirmed as a feudal to Count Guido Guerra dei Guidi, among which were Poppi, Battifolle, Porciano ;from then on for nearly three centuries, the history of Poppi is closely connected with that of its Lords, who were, for a long time, among the most powerful of the Tuscan feudal nobles, often protagonists in the principal events of the Fiorentini politics of the XII and XIII centuries. In 1261 Count Simone surrounded the township with walls and began the construction of the palace, which was finished towards the end of the century by his son Guido. Followers of the Ghibellina faction, the Guidi di Poppi were forced, after the death of Manfredi (1266), to make an act of submission to the Guelfi who were dominant in Firenze. On 11th June 1289, close to the walls of the Castle in the plain of Campaldino, the historic battle was fought between Firenze and Arezzo, which sanctioned the predominance of Firenze and the Guelfo formation in Toscana, even if for the moment without any concrete acquisition of territory. The next year the Fiorentini, returning from an unfruitful expedition against Arezzo, devastated the Casentino, setting on fire the Castle of Poppi, out of hatred for the Count Guido Novello who had been Vicariate General to King Manfredi in Firenze. Finally in 1440, during an assault by the Milanesi military commanded by Niccolò Piccinino, Count Francesco dei Guidi who had favoured the enemies of Firenze after the Fiorentini victory at Anghiari, was besieged in his Castle and forced to surrender. Passing into the possession of the Fiorentina republic, Poppi became Vicariate Seat with jurisdiction covering the whole of the Casentino. Among its illustrious sons must be remembered the sculpture Mino, called da Fiesole (1430-1484), the artist Francesco Morandini, called il Poppi (1544-1597) and the free thinker and poet Tommaso Crudeli (1703-1745). In the community territory there are the ruins of the Abbey of Strumi (X century) primarily Benedettina then Vallombrosana, and the Hermitage of Camaldoli, constructed at the beginning of the XI century by San Romualdo near the Apennine ridge surrounded by thick Fir and Beech woods. In April of 1944 during the German occupation more than 150 inhabitants of Poppi were deported and many of them died in the concentration camps. 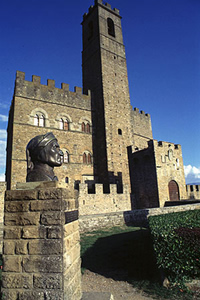 Poppi Castle
The castle of Poppi is the most important medieval monument of the whole Casentino area. Unlike all the other castles and architectures of the zone it wasn't wasted by the time or ruined by the men, having always been used as residence of the local political or administrative power, in fact it is still today seat of the Commune of Poppi. Since its origins the history of the castle was strongly tied to that of the biggest feudal family of the Casentino that made of Poppi the center of their great fief and lived in this castle for almost four hundred years: the counts of the Guidi family.
Despite to the fact that the first written notices of the existence of the castle are dated 1191, its architecture lets us suppose that the foundation was antecedent of two or three centuries, back to the period between the invasions of Italy of the Longbeards and the French .
The original nucleus of the castle is constituted by the high square tower that still dominates the rest of the construction and the underlying valley. The today's aspect is not the original one, in fact in the last century the tower was partially reconstructed, principally during the restoration following the damages suffered when it was hit by a great lightning. The tower was higher and gifted of machicoulis (projection from the wall made of stone which has openings through which the defenders can fire upon an enemy directly below), the legend says it was taken for model by the Master Mason Arnolfo di Cambio for the construction of the one of 'Palazzo Vecchio' in Florence, that is still today intact. About three or four meters of the base are currently buried, this cover the scarped wall of the tower. The openings in the masonry seem to be original. After the tower was built a walled enclosure all around it, from which were then developed the other buildings of the fortification. 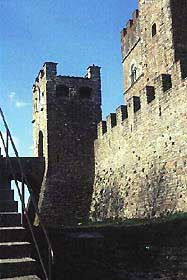 The complex was endowed with only two gates, the main, with a steep ramp of access, on the side towards the valley and the suburb of Ponte a Poppi (Poppi's ancient market place on the river Arno) and the other on the opposite side toward the square of the town. After the last big restructuring of the castle, in 1470, this last became the principal access with the name of 'Lion gate'.

The 'Munizione tower' seen by the ditch.
The castle was widened with the construction of a rectangular block placed on the right of the tower (looking from the town square). This was the primitive keep, used respectively from the low to the highest floors to: jail, deposit and residence. Today it is united at the tower by a curtain wall, but originally the two constructions were detached, connected only by a drawbridge at the highest floor, to be independent and eventually each at defense of the other in case of attack. In the hall of the residential level of the keep was signed in 1440 the act of surrender of the last of the counts Guidi, Francesco, to the Florentine Republic.

Almost contemporarily was begun the construction of the other wing of the castle at the opposite side of the tower. This was built only up to the first floor when the keep was finished, but that was enough for the creation of the inside courtyard that we can still admire today, rich of coats of arms in stone of the Florentine families that developed the Vicariate at the castle. 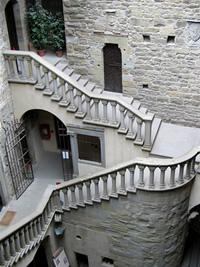 On the side toward Ponte a Poppi the courtyard is closed by the Chapel. Great part of these works are assigned to the count Simone Guidi, responsible of the great first reconstruction, initiated in 1274, that raised the original small fortress to the rank of feudal residence. To increase the elegance of the castle he opened also some mullioned windows on its facade.

Another big intervention had been brought ahead since 1470. This interested principally the inside courtyard with the construction of the splendid staircase in stone for the access at the plans of the building. Was excavated the ditch of separation between the castle and the square of the town and on the outer walls was erected the 'Munizione Tower' at defense of the 'Lion gate'. The 'Munizione' was endowed with a drawbridge, today disappeared. The castle was by now a splendid residential building. The works of the last century, with the remaking of big part of the battlements and the restoration of the mullioned windows and other parts of the masonry, has given it the splendid today's aspect .