In the Middle Ages the territory of Rapolano Terme was part of the properties of the Counts of the Scialenga who dominated over the main castle of the area. 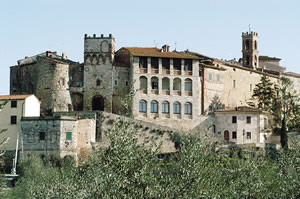 Rapolano Terme history
In the Middle Ages the territory of Rapolano was part of the properties of the Counts of the Scialenga who dominated over the main castle of the area. Very soon( already in the last part of the XII century) the Scialenghi were obliged to recognized the sovereignty of Siena on their possessions. In the XIII century the subordination to the commune of Siena became total; the main castle, Rapolano, was declared “border castle” and made a podesta’s seat in 1265-1266. At that time the thermal waters of Rapolano were already famous and active in Roman period, as it is testified by the important archaeological findings in the area of Campo Muri, waters which gush out in different places around the village, creating hidromineral baths attended for the cure of numerous diseases. Because of its position at the border with Siena, the castle was attacked and taken several times and the Florentines, in the XIII century, devastated it three times: in 1208, 1233-1234 and in 1253.
Other destructions are of 1306, when the castle became a shelter for the Guelph soldiers; in the XV century, during the Aragonese wars, and in 1554, during the conflict which will lead to the fall of the Sienese Republic. Annexed to the Medicean Granduchy, Rapolano continued to be the administrative centre of the homonymous “podesteria” which included four communities(Rapolano Terme, Serre, Armaiolo and Poggio Santa Cecilia). With the Leopoldin reforms, the podesteria was turned into a community and, after the national reunification, into a commune. The village seems to have developed starting from a castle, then stretching out southwards, starting from a primitive castle on the top of the hill and which forms a block which faces Piazza del Castellare and it is surrounded by Via del Castellare. 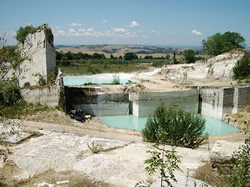 In the middle of this central part there is until nowadays a broken-tower with a pointed arch-door and a depressed arch-window on the north-eastern side; south-eastwards it is still isolated from the houses around, while on the other side they flank it even if they have been completely rebuilt. The following enlargements has developed east-westwards for a length of more than 250 metres and it is surrounded by a circle of walls which is partly still visible, even if in some parts it has completely disappeared or transformed mainly because of the houses which have been built over or in front of it; anyway, also where they still exist , they are reduced to the only base. They are alternated by 5 round towers in stone, with a scarp-base and a superior cord, except for one of that northwards; 3 of them are on the northern side; 1 is on the southern one and one on the western side, just beside a door, and another square one on the northern side. Two doors have been kept: one on the south-eastern corner, which is perpendicular to the wall with a pointed arch in stone and the other one, already mentioned, westwards, made up of a square tower which is holed by a round arch-opening, surmounted by two corbels, maybe a rest of the disappeared piombatoi and provided with a series of small arches on upside-down pyramid brick corbels. On the inside, there are several Medieval buildings. 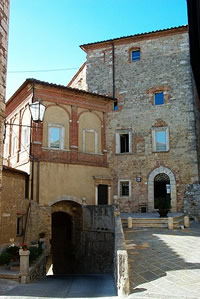 After long and delicate works of restoration , the Grancia of Serre di Rapolano has been opened to the public in the new rule of museum. The Museum of the Antica Grancia of the commune of Raploano has been created with the contribution of the Province of Siena. In collaboration with the Monuments and Fine Arts Service and the Councillorship of the Culture of Tuscany. With this operation knot again, in a symbolic way, the thread of a long way of the history not only of the community of Rapolano and Serre, but of the whole province, which has taken important pages of its history from the Hospital of Santa Maria della Scala and the system of the Grance. Some historic notices: its creation began in the XIII century and around the XIV century the complex had already the aspect of a continuous block which still keeps. Between the end of the XIV century and the beginning of the XV century it was partly turned into a fortress. Between 1521 and 1531 the deputation rooms of the Grancia and the main room were retouched. A new chapel was created near the Medieval one. Around 1575 it was built the big three-floors building which stretches near the second courtyard of the Grancia. The interventions of the last centuries reflect the functional character which the building got with the alienation of 1790. It is an important historic and cultural heritage which represented the centre of the local agricultural production, which was able to guarantee a part of the food for the sienese hospital. The Grancia was a store of wheat and also for the production of wine and olive oil. Just in order to keep all these functions, the Museum of the Antica Grancia provided for an articulated path. On the inside there is a sector called “oil’s museum” which is dedicated to the olive growing and the cycle of oil, which uses spaces and machineries of an old oil-mill. In these rooms there are some panels about the cultivation and production of the olive oil, which in the XX century was kept in some jars. Another sector of the museum holds the Centre of Documentation of the Grance. In a wing of the building, four multimedia-stations allow the visitors to know, by means of specific hypertexts, the happenings of the Grancia and the system of the Grance of the Hospital of Santa Maria della Scala. It is also possible to make a virtual visit in the main architectonic structures of the building.