The town of Roccalbegna is in the province of Grosseto at 520 m of altitude and it has a population of about 1200 inhabitants. 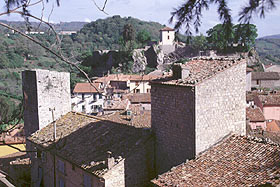 The town of Roccalbegna is in the province of Grosseto at 520 m of altitude and it has a population of about 1200 inhabitants. The Castle "La Pietra", the Santa Caterina Ethnographical Museum, the Oratory of the Santo Crocifisso, the Palazzo del Portino and the Palazzo della Lana can be visited while crossing its territory.
Roccalbegna and its castle had been mentioned in some documents since 1210. In that year, the emperor Otto IV gave it to the Abbey of San Salvatore set on the Amiata mountain.
Later, the Counts Aldobrandeschi, who were feudatories, took the place of the monks and gave the castle to the Santa Fiora's branch when their family split. At the end of the century, instead, one local family, which Ugolino di Roccalbegna belonged to, established its presence and it ceded its rights to Siena in 1296.
The Aldobrandeschi did not accept to be substituted and they carried out numerous assaults and sieges in Roccalbegna during the XIV century. In particular, the loot of 1331 made by the militia of the Cont Andrea di Santa Fiora, was the worst. This atmosphere of violence and instability contributed to weaken the economy of the town that underwent a long phase of crisis culminating with its annexation by the Tuscan Grand Duchy at the half of the XVI century.
With the Medici, Roccalbegna became a feud again and it was given to the dynasty of the Sforza-Cesarini that had substituted the Aldobrandeschi in Santa Fiora. Once Roccalbegna was given back to the Medici, it was ceded as a feud again to the Bichi-Ruspoli family about twenty years later and they ruled this town until 1751. With the abolition of Feudalism, wanted by Pietro Leopoldo of Lorraine at the half of the XVIII century, Roccalbegna recovered its dignity as a town.

The small fortress of Roccalbegna crowns a rock, called simply 'sasso' (stone), that from its sixty meters of altitude overhangs the homonymous suburb. The village lies on the southern side of the mount Labbro at the confluence between the rivers Armancione and Albegna, for a long time strategic zone for the control on the road that crosses the whole area of the Mount Amiata, that in this point get narrow.
The necessary to have an exceptional panoramic sight on the whole valley and the surrounding mountains is climbing up to the top of the 'sasso' and lean out, carefully, from the ramparts of the medieval fortification. Its characteristic position of 'eagle's nest' make its visit however interesting, although the Rocca can be considered more a great watchtower than a real fortress.
During the Middle Age the zone was under the dominion of the counts of the Aldobrandeschi family, to them is owed the construction of the fortifications in the second half of 13th century. The village was originally defended also by walls and by a keep with square form built on another small relief in front of the 'sasso'. This was the central nucleus of Roccalbegna, of which today remain only two towers and a line of the walled enclosure.
The fortress that has come almost intact to us was the small rocca, used only as point of lookout and last shelter in case of capitulation of the suburb. During the 14th century the suburb knew a period of great degrade that caused its almost total abandonment.
In 1455 the fortifications were readapted from the Senesi, but this only partly stopped the regressive trend of this area. With the defeat of the Senese Republic, at the mid-16th century, Roccalbegna passed to the Granduchy held up by Cosimo I de' Medici, but already in 1560 it was given in feud to the cardinal Antonio Sforza.