Roccastrada, chief village of the district, was built around the 10th century, its main church, Chiesa di San Niccolò, was established around 1283. 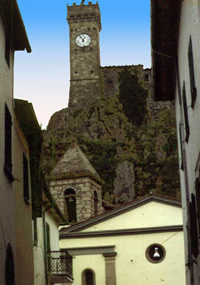 ROCCASTRADA, chief village of the district ,was built around the 10th century, its main church, Chiesa di San Niccolò, was established around 1283. It keeps two frescos dating back to the sixteenth century: one representing the Annunciation, the other a Madonna with Child. Both have been recently restored by the local Archeoclub.

RIBOLLA has been an important mining centre: lignite was excavated until 1954, when an enormous explosion stopped the coal extraction. The today’s village structure is developed on the basis of the existing mining village.

STICCIANO was first mentioned on an act of 996 which stated the local family’s authority, the Aldobrandeschi, on this village. Its position is extraordinary: it is like being on a balcony which overlooks the Maremma, the sea and the islands of Giglio, Elba and Corsica. The SS. Concezione, a Romanesque Church is worth a visit: it has a rectangular nave and a semicircular apse.

TORNIELLA and PILONI are small villages surrounded by chestnut wood trees, they both introduce the visitor the river Farma Valley, a protected area of incredible beauty and peculiarities. 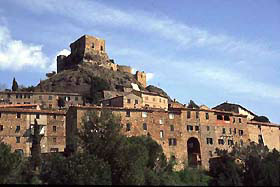 MONTEMASSI is a medieval village, dominated by an imposing fortification, Montemassi Castle, was repeatedly besieged during the fourteenth and fifteenth centuries and finally conquered in 1328 by the Sienese Republic.
This conquest is celebrated in a very famous and discussed fresco attributed to Simone Martini, in which we can see Guidoriccio da Fogliano, a mercenary soldier, hired by Siena that proudly enters a defeated Montemassi on the back of his horse. We can admire this fresco at the Palazzo Pubblico in Siena, inside the "Mappamondo Hall".

ROCCATEDERIGHI is one of the most interesting and well preserved medieval village of this area, it is mimetically built on huge trachyte rock spurs called "i massi" overlooking the Maremma. We can still notice the remains of its "Cassero"(1) near the Tower Clock, and parts of the ancient walls. At the very top of the village there is a church, Chiesa di San Martino Vescovo, built around the tenth century. Both the village of Sassofortino, where we can notice several doorways carved in the local stone, and Roccateterighi are situated at the foot of Sassoforte, a 787 metres high mount where the remains of a mighty fortress lie:il castello di Sassoforte.

VINE AND WINE MUSEUM
Made out of the ancient "Colo's Gallery", the Vine and Wine Museum is a must stop on the Strada del Vino Monteregio di Massa Marittima. The entrance to the museum, in Piazza dell'Orologio, welcomes visitors with explanatory panels, pictures, historical findings and old peasants testimonies and drives them to the discovery of the place that was bored through living trachyte rock. Going downstairs you access the underground cellar where a mine gallery was re-created along with old peasants tools as to symbolise the two main economic activities of this area: agriculture and mining. Back to the main hall of the Museum you can admire all the different brands of the Strada del Vino Monteregio di Massa Marittima till you get to the outdoor terrace where you can taste wine and local products. Here, while your view expands all around on a unique panorama made of countryside, hills, medieval villages and Mediterranean scrub woods, you admire Maremma Toscana and are aware you now know it inside out.