The urban shape of San Casciano dei Bagni naturally traces a route that gently accompanies you during your discovering of the most beautiful corners. 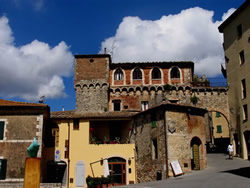 The urban shape of San Casciano dei Bagni naturally traces a route that gently accompanies you during your discovering of the most beautiful corners. It is a circular itinerary, as well as the old town centre that is positioned around the hill peak and the Collegiate that marks its top with its bell tower. The first imagine you have about San Casciano dei Bagn, is a predominant Castle, with its walls and elegant tower, so perfectly integrated into local surroundings that it does not seem to be built in the beginning of the 20th century.
From piazza Matteotti square, it seems that you are on a terrace where you can admire one of the most beautiful panoramas of Tuscan countryside.

Discover San Casciano dei Bagni
Distinguished Collegiate to st. Leonard
This is the main church in San Casciano. During the past centuries both the architectural structure and the ecclesiastic organization that ruled it have had many changes. In the beginning it was ruled by four priests called “San Guglielmo pensioners” as they were under the authority of a monastery ruled by “Guglielmiti” monks that was situated near Acerona. The church was probably dedicated to San Leonardo because this saint was worshipped in the monastery near Acerona. In 1618 the church was elevated to the status of “distinguished collegiate church” ruled by a Chapter composed of seven priests; the Archpriest was the major authority of the chapter. 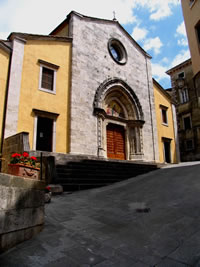 The community that had rights of possession of San Leonardo used to make the nomination of the Archpriest and of the other six priests. Besides Canonries, including also the Deposition of Jesus Christ, there were also five Benefits, owned by some eminent families from San Casciano that elected on their own the priests charged of them. The 17th and 18th centuries were the periods of major magnificence for the church that was visited very often by Bishops and Cardinals from Italy and from abroad, coming to San Casciano’s spa for treatments. The church has had many changes also in its architectural structure. In the beginning the church was supposed to be settled on a west/east axis instead of the today’s south/north direction. The entrance was on the side that is now occupied by the Oratory of Sant’Antonio, as it was shown when the present portal was found on that side. The style was surely gothic with a lot of elements made of worked travertine, as we can see from the portal and from the remains of cornices and columns. The present direction was probably given in the 16th century, when the Company of Sant’Antonio was founded and the respective church was built. The bell tower was built in 1606.

Church to ST. Antony
The Company of Sant’Antonio that was founded between the end of the 15th century and the beginning of the 16th century had its seat in the church dedicated to Sant’Antonio, which is next to San Leonardo. The Company also possessed two Hospitals: one of them was in the village and the other one was next to “Santa Maria della Colonna alle Terme” church, each hospital was ruled by a representative elected by the Council of the Company. Also Sant’Antonio has had many architectural changes, especially in the 18th century. In 1741 the steps connecting the church to San Leonardo that had been placed at first on one side of the high altar dedicated to San Cassiano were moved. In 1748 many works modified the internal aspect of the church that was given a baroque look thanks to the building of a circular apse and of artificial travertine columns. Ten years later the master Pietro Sperone finished the stuccoes that decorated the apse. A wooden statue representing the Virgin with the Infant Jesus is also inside the church.

Town Hall
Originally it was used as Law Courts, as seat of the Commune administrative branches, and it was also the Podestà’s residence. The building of the adjoining castle modified its original structure. The façade and the entrance-hall are decorated with the coats of arms belonging to some of San Casciano’s podestàs. On the façade left side there is one column where the old units of measurement of San Casciano are reproduced. An architrave from the 16th century with the coat of arms of the Commune is also conserved in the entrance-hall. An Etruscan funerary urn made of terracotta is conserved in the Mayor’s office.

Castle (Fighine)
In 1446, once they had definitively conquered Fighine, the Republic of Siena commissioned to Biagio De Stinis the extension of the castle so that it could have a quadrangular plan. Four towers bound the castle at the summits: the old tower (the quadrangular one, that was adapted to the new military requirements thanks to the building of the buttress and to the restoration of merlons and brackets), the main tower, the half round tower and the tower called “saracinesca” (portcullis). The latter is not mentioned on documents from that period, but it appears on subsequent documents and likely had the function to protect the entrance of the castle. A relief in the soil was also lowered on the western side, as it was the only real danger for an artillery attack. The attack of the papal army in 1451 interrupted the works, even if they were already finished as for the essential structures. In 1466 the Republic of Siena sent the master Giovanni Gori from San Quirico to finish the works in Fighine.
astle. The town centre still has a particular quadrangular structure with large and very straight streets and a big square, which is disproportionate to the present size of the village. 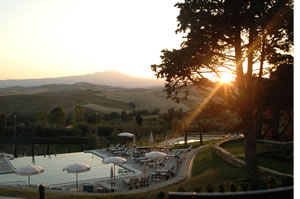 San Casciano's hot springs
San Casciano’s hot springs have certainly enjoyed a high reputation during the centuries, as it is testified by treatises from past authors as well as by contemporary studies.
Archaeological remains also confirm this theory, but the lack of research in this
field so far, makes more important the memories of our ancestors. Like other thermal resorts San Casciano had to face a period of decline in the early Middle Ages, suffering a big decrease in population and in extension. However, unlike other resorts, San Casciano conserved its identity, some important remains of the old thermal structures and the memory of the use of hot springs, as it can be deduced from the fact that we can find the placename “ad balneo” on documents from the 10th century. As a consequence of this, San Casciano had an outstanding place in Italy during the 13th century, when there was a restarting of the habit of taking thermal treatments.

Ugolino from Montecatini in his work “Tractatus de balneis” (1417) dedicated a big space to “the many springs of San Casciano”. The law about sources and springs from 1590 shows San Casciano and San Filippo as the main spas in the state of Siena and it is suggested that they should be visited three times a year (the other ones could be visited just twice). The real recovery of San Casciano’s spa happened during the 17th and the 18th century, when the Italian and European nobility visited the resort. The eminent guests used to find accommodation in San Casciano inhabitants’ houses and used to stay for at least two weeks, as this was the suitable minimum time for treatments, following the therapeutic uses of the times. During the 19th century there was a big renewal in France and in Germany as regards thermal structures, it was the time of big self-sufficient structures including all kind of comfort and adapted to the rising industrial middle classes. San Casciano was not able to conform its structures to these levels and was soon left out from the main Italian spas.