Situated to the south of Florence, San Casciano is surrounded by the neighbouring Communes of Scandicci and Impruneta. 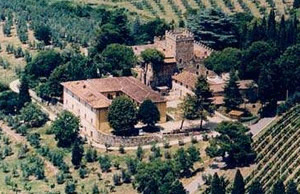 Situated to the south of Florence, San Casciano is surrounded by the neighbouring Communes of Scandicci and Impruneta (to the north), Greve (to the east), Tavarnelle Val di Pesa (to the south) and Montespertoli (to the west).In the past it was called "San Casciano a Decimo" because it stood on the tenth milestone of the Roman road. This was another city to become important under Florentine rule, in fact it was granted its first construction by the Florentine Bishops in 1241. Later, in 1272, San Casciano was governed by the Florentine Republic. Enrico VII, on his trip down the Italian peninsula, spent a few days in San Casciano in December 1312. In 1326 Castruccio Castracani fired the town. Later, 1343, Gualtieri di Brienne, duke of Athens and Lord of Florence, began to fortify it. The Florentines considered San Casciano, like Empoli and many other Tuscan towns, a strategic point of defence. In 1335, in fact, they built a Cassero (castle) in San Casciano, and surrounded it with thick walls and towers. The Grand Duke Ferdinando II donated the Cassero to Giovanni Santi Lucardesi , known as "The Indian", and this later became a Benedectine convent.
San Casciano possesses several buildings of artistic importance, among them the 1335 Church of the Misericordia, previously Santa Maria del Prato, in Gothic-Tuscan style. Inside the Chapel of La Collegiata we can find, on the right, a XIV century baptismal font and a lunette with a Madonna and Saints; at the third altar on the left is an "Annunciation" in the style of Ridolfo Ghirlandaio. The Church of San Francesco, of 1436 and altered in 1492 is also worth visiting. It contains a Madonna and Child with Saints, a painting by Biagio di Antonio of Florence. In the convent refectory we can find a fresco showing the "Last Supper", attributed to Passignano.

Museo di Arte Sacra
The museum is in rooms belonging to the church of Santa Maria del Gesù, and the first section consists of the rectangular hall of the church itself, where the original works are still in place, including a Madonna and Child by Lippo di Benivieni from the second decade of the 14th century. Works from other places of worship in the area include: the wooden Crucifix in the apse, a 14th-century Sienese work; a 16th-century painting depicting San Rocco, San Sebastiano and Sant’Antonio Abate, attributed to the Master of Tavarnelle; and the Incoronation of the Virgin by Neri di Bicci.
The finest works are in the sacristy adjoining the church, in particular two paintings from the church of San Vico l’Abate, fundamental early works of Italian figurative culture: the altar-frontal with St. Michael the Archangel, attributed to Coppo di Marcovaldo and dating to the mid-13th century, and the Madonna and Child by Ambrogio Lorenzetti, dated 1319. In the same room there are some fine gold-background 14th-century panels including: the Madonna and Child by the Master of the Horne triptych; various works on the same subject by Jacopo del Casentino, Master Francesco, Cenni di Francesco, the Master of Sant’Jacopo a Mucciana; and a painted cross attributed to the Master of San Lucchese and produced at the beginning of the 15th century. In front of the steps leading to the upper floor there is a polychrome marble statue attributed to Gino Micheli and dating to 1341.
In the final room, given over to liturgical vestments and paraments, there is a thurible and five processional crosses dating from the 14th-15th century, two chasubles of Florentine manufacture executed between the 15th and the 16th century and a fine 18th-century French cope.
Opening hours: Winter Sat 4,30-7;
Sunday and public holidays 10-12,30 / 4-7
Summer Sat 5-7,30;
Sunday and public holidays 10-12,30 / 4,30-7,30
Information: tel. fax 055 8256381/8255222 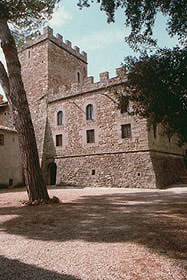 This contains a fine collection of art works gathered over the course of time by the Compagnia della Misericordia and housed inside the church of Santa Maria sul Prato. The paintings worthy of note include three 14th-century panels by Ugolino di Nerio depicting the Madonna and Child, St. Peter and St. Francis, and the Crucifix by Simone Martini. On the right wall of the church there is a marble pulpit from the middle of the 14th century, an important work by Giovanni di Balduccio.
Open: please, ring for the Misericordia attendant
Information: tel. fax 055 8229558

CASTELLO IL PALAGIO a Mercatale val di Pesa
Earliest records of this castle, found in manuscripts in the nearby abbey church of Passignano, date back to the first half of the 13th century, when Mercatale was a town of great importance to the Florentine Chianti economy. This fortress suffered various attacks down the centuries, without ever succumbing. In 1320 the castle was expanded and was larger than its current size. At the end of the 17th century it was sold to the Miniati barons, who turned it into a villa graced with works of art. What we see today is the result of restoration work carried out on the palagio in the early 19th century, a scheme that was heavily influenced by the Romantic cult of the Middle Ages in vogue at the time. This renovation process also revived the farming activities on the estate: new farm buildings were constructed including an oil-press, wine cellars and storerooms: 200 years on, these spaces are still used to make wine using traditional production methods.