San Gimignano rises on a hill (334m high) dominating the Elsa Valley with its towers. 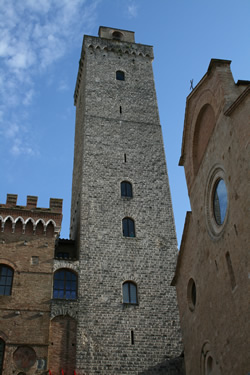 San Gimignano rises on a hill (334m high) dominating the Elsa Valley with its towers. Once the seat of a small Etruscan village of the Hellenistic period (200-300 BC) it began its life as a town in the 10th century taking its name from the Holy Bishop of Modena, St. Gimignano, who is said to have saved the village from the barbarian hordes. The town increased in wealth and developed greatly during the Middle Ages thanks to the "Via Francigena" the trading and pilgrim's route that crossed it. Such prosperity lead to the flourishing of works of art to adorn the churches and monasteries. In 1199 it became a free municipality and fought against the Bishops of Volterra and the surrounding municipalities. Due to internal power struggles it eventually divided into two factions one headed by the Ardinghelli family (Guelphs) and the other by the Salvucci family (Ghibellines). On the 8th May 1300 Dante Alighieri came to San Gimignano as the Ambassador of the Guelph League in Tuscany. In 1348 San Gimignano's population was drastically reduced by the Black Death Plague throwing the city into a serious crisis which eventually led to its submission to Florence in 1353. In the following centuries San Gimignano overcame its decline and isolation when its beauty and cultural importance together with its agricultural heritage were rediscovered. The construction of the towers dates back to the 11th and 13th centuries. The architecture of the city was influenced by Pisa, Siena and Florence. There are 14th century paintings of the Sienese School to be seen and 15th century paintings of the Florentine School.

Visit San Gimignano and its surrondings:
The Dome 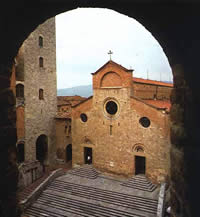 The Duomo or Collegiate Church situated on the west side of the Duomo square is a remarkable monument of Romanesque architecture in Tuscany. The Duomo is considered to be both a Temple of Faith and of Art and indeed, some works of art still in the church, or from there moved to the Town Museums, were financed and created thanks to donations or offerings. In the archives there are wills bearing testimony to this devotion that were made by both illustrious and simple persons. Altars, chapels, freizes, frescoes, paintings commissioned from the most famous artists by the persons responsible for the Opera del Duomo, by public administrators and private citizens, all have contributed to make this church more beautiful and rich in works of art. Originally the present church was a simple parish church that in 1056 was transformed into a Propositura (the name given to a parish church responsible for other small parish churches in the surrounding area) by Pope Vittore II. In 1148 the Duomo was consecrated by Pope Eugenio III returning to Rome along the Via Francigena. In 1182 a papal "Bolla" (papal document) issued by Pope Lucio III granted it numerous privileges. In 1220 Pope Onorio III confirmed the Canonical Chapter’s privileges, as Pope Innocenzo IV did in 1241.
This extraordinary attention given to the church by important religious dignitaries led the Proposto ( the person responsible for the Propositura), Canons, and the Municipality to make the church a more magnificient place of worship worthy of its excellent reputation. It became a Basilica in 1932. In 1238 works to enlarge and embellish the church began that continued until the end of the 17th century with many famous artists taking part. The Saints of San Gimingnano such as St. Fina, St. Bartolo, St. Piero, The Martyr and the Blessed Ciardo, were worshipped and celebrated in the church. Gimignano, the Saint and Bishop of Modena has his remains and his altar here. Every year on 31st January (St. Gimignano Day) he is the object of special celebration. Canons, Franciscan, Capuchin, Dominican and Augustinian friars preached from the pulpit of the church as did Girolamo Savonarola in 1483. Several Cardinals were given the title of Proposto (the person responsible for the Propositura) of the church, as in 1146 Giordano Orsini, Napoleone Orsini in 1314, Francesco Carbone in 1389, Francesco Soderini in 1495 and Baldassarre Cossa who was elected Antipope in 1410 and removed in 1414 by the Council of Costanza.
Inside the Duomowe find many very beautiful frescoes: along the walls in the left aisle, Bartolo di Fredi painted "Scenes from the Old Testament" and in the right aisle we find frescoes representing "Scenes from the New Testament" originally considered to be the work of Barna da Siena and recently attributed to "La Bottega dei Memmi".
Entering the central nave we find two famous wooden statues by Jacopo della Quercia standing on both sides of the fresco illustrating the "Martyrdom of St. Sebastiano" by Benozzo Gozzoli.
On the upper part of the central nave between the two doors, above the first two arches on the right and left hand sides are Taddeo di Bartolo’s frescoes showing "the Last Judgement".
In the right aisle, next to the transept, we find the famous Chapel of St. Fina built in 1468. It is the most precious work of art in the Duomo thanks to its elegant altar by Benedetto da Maiano and to its frescoes by Domenico Ghirlandaio representing on the right hand side "St. Gregorio foretelling St. Fina of her approaching death" and on the left hand side "Her Funeral Rites". 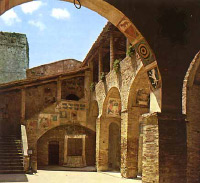 The People’s Palace or new Podesta’s Palace, which is today the home of the Town Council is situated on the left hand side of the Duomo square. It is one of the most important monuments of San Gimignano, being both the home of the Civic Museum and rich in paintings by the Florentine and Sienese schools (dating from the 13th century) such as the Crucifix, painted by Coppo di Marcovaldo, the triptyches by Niccolò Tegliacci and Taddeo di Bartolo dating from the 14th century, and other important works of art dating from the 15th century painted by Domenico Michelino, Pinturicchio and Filippino Lippi. In the different rooms of the Palace you can find various frescoes on the walls such as the "Scenes of private life" painted by Memmo di Filippuccio and "The Maestà" painted by Lippo Memmi. On the right hand side of the Palace rises the high "Great Tower" erected in 1300. On the balcony above the entrance the Podestas (persons responsible for the Municipality) took their oaths. In front of the Palace and the Tower, a ballatoio (stairs leading to and from a narrow terrace) called l’Arengo can be admired. 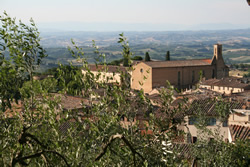 It can be reached from the Porta St. Matteo by passing along via Cellolese. Its very simple façade still retains the characteristics of its original architectural style. The door in the main façade is not used as the entrance, instead in order to enter the Church the door on the right hand side is generally used. The interior of the Church consists of a single great nave with three ogival apses.
The roof is supported by a wooden framework. The construction of the Church of St. Agostino, with a single nave in Romanesque style with Gothic elements, began in 1280 and terminated on 31st March 1298 when it was consecrated by Cardinal Matteo D’Acquasparta. We owe to the Prior Fra Domenico Strambi, the building of the Cloister in the second half of the 15th century and the decoration of the Church in Renaissance style. Extremely interesting to see is the Chapel of the Blessed Bartolo, whose mortal remains are kept in a marble monument sculpted by Benedetto da Maiano in 1495. In 1500 Sebastiano Mainardi frescoed the Chapel’s walls and vaults. Its terracotta floor is the work of Andrea della Robbia. Above the High Altar dominates "The Coronation of the Madonna and the Saints" painted in 1483 by Piero del Pollaiolo. The frescoes in the Chancel representing "Episodes from the life of St. Agostino" were painted by Benozzo Gozzoli between 1464 and 1465 with the help of two of his pupils Pier Francesco Fiorentino and Giusto d’Andrea who also painted the votive fresco of St. Sebastiano.
Other notable works of art in this church are the fragments remaining from a fresco by Bartolo di Fredi and a fresco showing "The Madonna" painted by Lippo Memmi in 1317 as well as the tablet representing "The Madonna and the Saints" painted by Fra Bartolomeo in 1530 and, in the sacristy, a wooden Crucifix dating from the 15th century. 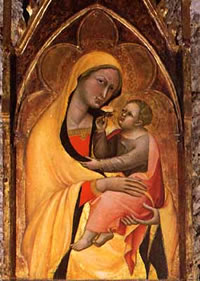 Museum of Sacred Art
The Museum was created in 1915 and it remained in the sacristy of the Parish until 1929 when it was moved to its present site. It has recently been reorganized and includes works of art from convents, and the Duomo, as wellas donations by private citizens. Some objects belong to the Town Council. The museum is divided into several rooms and has valuable objects such as wooden sculptures dating from the 14th century: the Annunciation comprising two statues, one which represents "The Angel" and the other "The Madonna", of which only the head and the shoulders still exist and "The Crucifix" where the figure of Christ is represented handless and with his feet on a wooden base; the splendid psalm books and antiphonaries (books that contain verses which precede psalms) works of Niccolò di Ser Sozzo Tegliacci and Lippo Vanni dating from the 14th century. "The Madonna of the Rose" (see picture above), part of a triptych by Bartolo di Fredi, is exhibited facing the psalm books. In the Silverware room, extremely finely worked examples of goldsmith’s art, embossed and engraved work can be admired. Only the very best craftsmanship and refined techniques can create suchremarkable works. They mostly date back to the 17th and 18th century. The exceptional craftsmanship mentioned is also represented by notable works in silk and satin with gold and silver braids.

Etruscan Museum
In the museum there is an exhibition of archeological findings from digs in the surrounding area and especially from Ranza and Cellole. The Archeological Youth Group of San Gimigmanosupported by the Monuments and Fine Arts Service in Siena and Florence, has restored and catalogued these findings that are topographically displayed in show-cases. Besides the objects of a more common use (plates, bowls, vases, buckles and necklaces) particularly interesting are the cinerary urns (see picture) in a style similar to those in Volterra with a stretched out figure of a deceased person holding a plate containing a small offering to pay for the journey to the afterlife.

The Medieval Wash-houses
The Porta delle Fonti opens onto the countryside and leads to the ancient wash-houses once used for drawing water and washing linen. The construction, which dates back to the 14th century, consists of ten Romanesque and ogival arches. It was built upon the site of a 9th century well constructed in Lombard stone. The Porta delle Fonti was part of the second circuit of walls. It was modified in 1930 when the superstructure of the chapel, which had been built in 1501, was demolished. The fresco by an unknown Sienese artist dating from the 16th century which depicts "The Madonna and Child with the Saints Michele and Giovanni Battista" was moved to the inside of the "Loggia Nuova" (new loggia) of the People’s Palace.