San Giovanni d'Asso is located from the hill dominating the valley of the Asso torrent the Crete and offer a magic and atmospheres of a pure and perfumed land.

From the hill dominating the valley of the Asso torrent the Crete offer all the magic and atmospheres of a pure and perfumed land.
Because San Giovanni is the kingdom of the white truffle which is celebrated each November at the traditional Market Exhibition held in the Castle of the “ Borghetto”, the highest part of the village
Worth visiting are the Romanesque church of San Giovanni Battista and, lower down, the church of San Pietro in Villore (11th – 12th century). Over and above the fine stone of San Giovanni, another notable aspect is the environmental heritage of the localities around the Asso valley a decidedly superb landscape.
Don’t miss the hamlet and castle of Monterongriffoli the rural districts of Vergelle , the poetry of Lucignano d’Asso , Montisi with its historic grange and the extraordinary dirt road of Pieve a Salti. 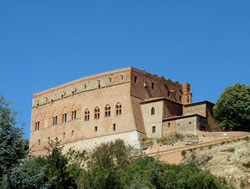 The castle
Located at the top of a hill, overlooking the Asso River valley, this castle is probably to be included amongst the properties belonging to the Imperial Officers, however in the ancient times it was the seat of a rural Etruscan settlement. In 1151 it belonged to Counts Pallonieri di Forteguerra who granted it to the Siena municipality. Following, the castle belonged to the Viscount Ugolino Scalari and the Ardengheschi famili of Civitella.
From the 1200's onwards San Giovanni d'Asso passed into the secure hands of the most powerful Sienese families: the Buonsignori, Salimbeni and Petroni. The castle was object of debate between the Bishops of Arezzo and Siena, then was sacked by Ghibellines in 1315. Only in the middle of the 15th century the Republic of Siena took direct control on San Giovanni d'Asso.
The old defensive structures around the village, which grew up alongside the castle, have almost completely disappeared, except for a large tower. The Castle is however well preserved and located in the higher part of the town, called 'Borghetto' [Hamlet], its origin dates back to the 13th and 14th centuries.
It was erected by the Sienese architects Agostino and Agnolo di Ventura. The fortified structure, completely built in bricks, consist of two parts, one much older with the characteristic of a fortress with bastionated walls, turrets and some remnants of crenellation, the other with the appearance of an urban palace with single light , mullioned windows with gothic arches and a huge courtyard. It was also used as 'Grancia' of the Hospice of Spedale of Santa Maria della Scala of Siena. In the month of November, the Castle hosts the famous White Truffle Market Exhibit.