San Miniato is located along the Via Francigena that connected northern Europe to Rome during the Middle Ages and it was travelled by an uninterrupted flow of men, armies, trade, ideas and culture. 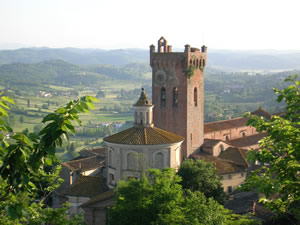 Tuscany is one of the most famous regions in Europe and has one of the richest histories. San Miniato, the XX mile City, has always been a part of this history.
This title comes from its special geographical position.
San Miniato is located along the Via Francigena (The road from France) that connected northern Europe to Rome during the Middle Ages and it was travelled by an uninterrupted flow of men, armies, trade, ideas and culture. Situated along this route in the heart of the Arno River Valley, San Miniato was at the intersection of the roads between Florence and Pisa, Lucca and Siena. Pistoia, San Gimignano, Volterra and Vinci also lay within these twenty miles.
It is not surprising, therefore, that San Miniato was a favoured city of emperors like Fredrick II of Swabia and Popes such as Gregory V and Eugene IV. In 1533, for example, as Michelangelo wrote in one of his manuscripts, he met with Pope Clement VII in San Miniato where the pontiff commissioned him to paint the Sistine Chapel.

A few years later, Michel de Montaigne stopped there and recorded the visit in his work “Travel to Italy”. It may be that another great traveller, Wolfgang Goethe, whose journey between Florence and Siena was documented, stopped to visit San Miniato al Tedesco, the Rocca, the castle of his fellow countryman Frederick II and the sixteenth-century Accademia degli Affidati.
The entire history of Tuscany, from the Etruscans to the Grand Duchy of Hapsburg-Lorraine, found a meeting point in San Miniato.

History
San Miniato has a history of Etruscan and later Roman colonies, as evidenced by excavations of a III century B.C. necropolis in Fontevivo and those of a Roman villa in Antonini. The finds excavated there are kept in the Archaeological Museum in Florence and a smaller number in the Museo Civico (Municipal Museum).
The original core of the city dates back to the 8th century when, according to the original document from 713 kept in the Archivio Arcivescovile (Archiepiscopal Archives) in Lucca, seventeen Longobards built a church there dedicated to the martyr Miniato.
The city's origin is therefore Germanic, and since the Middle Ages it would be known as San Miniato al Tedesco. In the span of five centuries San Miniato grew as a medieval bastion, from when Otto I of Saxony in 962 made it one of the seats of his imperial government, up to when Frederick II of Swabia built his castle there in 1218, making it the focal point for central Italy's tax collection.
After the decline of Swevian power, San Miniato became an independent commune. The city grew to include large convents, schools, institutions and hospitals. The town Statutes, kept in the historical archives, give evidence to the independence and good fortune they enjoyed. Only at the end of the 14th century was San Miniato forced to go under the rule of the newly powerful Florentine Signoria (Seigniory).
It will be another German, Maria Maddalena of Austria, wife of Cosimo dei Medici, to help San Miniato by making it the bishop's see in 1622. In gratitude, a large marble statue was erected in her honour. Unfortunately, it was destroyed at the end of the eighteenth century by the San Miniato Jacobins during the French Revolution and today only a large fragment of it remains near the Franciscan convent.
The city saw its strongest growth take place in the following century.
The diocesan see enriched it with the Santuario del Santissimo Crocifisso (Sanctuary of the Holy Crucifix) and the large Seminary. Cultural life was fertile and study and cultural academies, such as the Affidati and later the Euteleti, were founded.
San Miniato is well-established city by the end of the 19th century. It will be the Second World War to inflict on it a hard blow when the German army mine and destroy Frederick II's castle fortress and a large part of the old medieval districts. Reconstruction is quick though: in 1957 the fortress is rebuilt from the rubble, and the city's rebirth can be admired from the plain below.

Art and Culture
Such a history could not but leave an important artistic and architectural heritage. A short tour of the town can begin with the central Piazza del Popolo, with its fourteenth century church of San Domenico, rich with works of art such as a fresco of St. Anselmo, attributed by Longhi and Berenson to Masolino da Panicale, and a sepulchral monument by Donatello.

To the left of the church’s facade is the amazing Via Angelica, an underground passageway leading from the walls that connected the city to the countryside, where chapels of the ancient convent can be seen. To the right are the convent’s cloisters which were confiscated and opened to the populace during Napoleon’s rule. Here the Historical Archives are kept, one of the richest in Tuscany with over one hundred thousand documents dating back to 1200, including the ancient City Statutes.
Continuing on, examples of Renaissance architecture can be seen including the Palazzo Formichini, housing the Cassa di Risparmio’s art collection (with works by Guercino, Lorenzo di Bicci, Jacopo del Sellaio, Cigoli and Giovanbattista Naldini), and particularly the Palazzo Grifoni, built in 1555 by Giuliano di Baccio d'Agnolo. Proceeding downhill is the octagonal shaped church of the Santissima Annunziata that contains the relics of St. Dorothy, and the Monastery of St. Clare, another museum with works by Cigoli, Deodato Orlandi, Jacopo Chimenti and panels from fifteenth century Sienese and Florentine schools.
Going in the opposite direction from San Domenico you reach the old castle area. After passing the Palazzo Roffia, also by Giuliano di Baccio d’Agnolo, you proceed though the Porta Toppariorum which gives access to the core of the ancient defence complex. Inside the Gate is the Casatorre degli Stipendiari, built by Frederick to house the military contingent, and today an exhibition area. Ahead is the scenic Piazza del Seminario, closed off by the other medieval door called the Ruga.
Through a three-way access from the Piazza, you can go up to the Piazza del Duomo. Ruins dating back to the 11th century of the tower and the Palazzo Imperiale (Imperial Palace) can be seen here, where four Germanic emperors stayed as guests of the Swevian and Othan vicars: Otto I of Saxony in 962, Frederick Barbarossa in 1167 and again in 1178, Otto IV in 1209 and Frederick II of Swabia in 1218, 1226 and in 1240. Facing it is the Palazzo Vescovile (Bishop’s Palace), erected in the fourteenth century over three pre-existing buildings. In front of it is the Cathedral, the ancient parish of Holy Mary dating back to 1100 which retains its Romanesque facade.
Next to it is the Museo Diocesano d’Arte Sacra (the Diocesan Museum of Religious Art), which houses many works including a Redeemer by Verrocchio and a Crucifixion by Filippino Lippo. Behind it stands the Torre di Matilde, erected in 1100 and which later became part of the Cathedral as its bell tower. Above it is the fortress and surrounding walls dating back to Frederick II’s time. Here, as Dante writes in the XIII canto of his Inferno, Frederick’s advisor Pier delle Vigne fell out of grace and was imprisoned and left to die.
The massive fourteenth century convent of San Francesco is located on the slope of the highest hill and was for many centuries one of the most flourishing Franciscan centres in Tuscany. In the fifteenth century it was run by the Blessed Borromeo and Bernard, who later taught at Oxford and the Sorbonne. On the other side of the hill is the Santissimo Crocifisso (Holy Crucifix), an important Sanctuary in the form of a Greek Cross by Anton Maria Ferri in 1705 containing an 11th century wooden cross that is venerated and thought to be miraculous.
In front of the Sanctuary is the Palazzo del Commune (Town Hall), with its frescoed rooms and nineteenth century facade, and the Oratorio del Loretino (Oratory of Loretino), with panels by Francesco Lanfranchi, brother of Andrea Del Sarto, and a wooden altar from 1527. As you descend the hill, amidst early Middle Age churches and palaces, is the historical Piazza Bonaparte with its monument to Leopold, Grand Duke of Tuscany by Pampaloni and the Oratory of San Rocco, the ancient chapel of the Buonaparte family.
Lastly, continuing towards the ruined Porta di Poggighisi (Poggighisi Gate), from where Francesco Ferrucci conquered the city in 1530, is the Church of Santa Caterina, altered in the 15th century and housing the skeleton of St. Boniface the martyr, and the sixteenth century Palazzo Migliorati, home today of the Accademia degli Euteleti, where the funeral mask of Napoleon is kept.

San Miniato’s hillside profile from the early Middle Ages divides the Arno River Valley, dense with towns and settlements, and the uncontaminated panorama of its vast rural hinterland. On the map, the “hills of San Miniato” connect the Florentine area of Montespertoli and San Casciano, the Valdelsa of San Gimignano and the inland Pisan countryside to the Etruscan town of Volterra, which, on a clear day, you can see from the Colle della Rocca (Castle Hill).
The first news about the territory of San Miniato dates from 938 and can be found at the Archiepiscopal Archives in Lucca: and it is an act of enfeoffment that confers the city and over thirty nearby localities to a lord. The most important farms in the territory are already listed in this document. A Papal Bill from 1195 shows over fifty churches with their rural communities were located in the San Miniato territory.
It is not surprising, therefore, that the San Miniato countryside still has numerous small villages, villas, parishes and castles. The most interesting itinerary is in the direction of the Valle dell’Egola (Egola River Valley), a tributary of the Arno river going southwest.
Coming down the hill from the town of Costa towards the inland area of Pisa and going through the village of Serra, a steep unpaved road in the midst of a forest will take you to the Castle of Montebicchieri, one of the bastions for the defence of the old commune. An ancient abandoned rural settlement amid large oak trees today surrounds the castle.
Returning back towards Serra and heading in the direction of Palaia, you come upon an interesting sight. Turning towards Bucciano, going up the hill and proceeding towards the Chiecina river valley, the ancient Pieve di Barbinaia can be reached. Mentioned in documents dating back to the year 868, its ruins later became part of an old farmhouse, now in rubble.
Leaving the Valley and returning the opposite way along the Egola river, you can climb to the ancient village of Balconevisi, dominated by the Villa Strozzi. From this very old settlement (the name is probably Longobard: the Valle di Cunighiso) several very interesting itineraries can be followed, some of which lead to underground tombs from the Neolithic Age.
Finally, continuing along the Valley, you will come to the Pieve di San Giovanni di Corazzano (Parish Church of St. John), a national monument and classic example of rural Romanesque architecture. It dates back to the 12th century and with its distinct red terracotta colour, combines in its marble facade Roman ruins from the Classical Age taken from the pre-existing colony, the ancient Roman settlement of Quaratiana.