San Quirico is Etruscan in origin, and cinerary urns and other funeral objects and vessels found here are now kept in the Etruscan archeological museum in Siena.

San Quirico is Etruscan in origin, and cinerary urns and other funeral objects and vessels found here are now kept in the Etruscan archeological museum in Siena. The first explicit reference to San Quirico was at the time of a dispute, in 712, between the diocese of Sienna and Arezzo over the possession of some parishes, among which was San Quirico in Osenna. The outcome of this dispute was a decision, confirmed by King Liutprando, in favour of the church of Arezzo. The name "Osenna" was in use until the 17 C and probably referred to a water-course which has now disappeared. It is an Etruscan place-name and perhaps even "Orcia" (water, stream or brook) is pre-Roman. From the beginning of the 11 C, the name of San Quirico in Osenna is mentioned more frequently, especially in connection to travel along the important Via Francigena (or Romea, the pilgrims' way to Rome) by important Europeans in the political and ecclesiastical world. In 1154, Federico I (Barbarossa) came to Italy to receive the Imperial Crown. While heading towards Rome, his army encamped at San Quirico, where Pope Adrian IV sent three cardinals to meet the him. In 1180, the Siennese extended their jurisdiction over San Quirico and soon after that the town became the seat of the Imperial Vicar. At San Quirico, in 1205, a congress of the "Lega di Toscana" (League of Tuscany) was held. With the fall of the Republic of Sienna, San Quirico passed into the hands of the Marchese of Marignano and, some time after, it was under the rule of Cosimo de' Medici. After becoming the cause of a feud for the title of marquisate by Grand Duke Cosimo III, in 1677 it was conceded to Cardinal Flavio Chigi, nephew of Pope Adrian VII.

Visit San Quirico D'Orcia:
La cinta muraria
A large part of the antique town walls still stand along with 14 small towers, although some of them are incorporated into other buildings. Unfortunately, nothing remains of the North and South gates, although the partially original Eastern gate is preserved. Probably this was originally preceded by an outer gate, of which only the base remains.
La Collegiata
The present church was built on the site of the old parish church, which dated from the 8 C. La Collegiata three doorways. The first, brought from Siena, is a magnificent example of Romanesque art, constructed of sandstone and travertine. An extraordinary wealth of symbolic religious themes can be seen on the inside of the great round arch. The first "portale di mezzogiorno" (southern door), is obviously still in the Romanesque style, even though there is a hint of the Gothic, is attributed to Giovanni Pisano. With its protruding porch supported on two columns, and with its wonderful balance, it encorporates elements of the Classical, Romanesque and Gothic styles. The bell-tower, as it appears today, was built at the end of the 18 C and replaced the old, arched bell tower. Inside the church, there is a triangular beamed ceiling. The baroque choir was built in 1655, replacing the original apse, and the high altar is in the rococo style. Behind the altar, the magnificent, inlaid panels, by the Siennese Antonio Barili, date from between 1482 and 1502. The nineteen wonderful marquetry panels, of which only seven are still at San Quirico, were acquired by the Marchese Chigi in 1749 and set into the choir. The organ, dating from the 17 C, was revealed after restoration to have a splendid timbre, which is emphasised by the perfect acoustics of the church. In a wing of the transept there is a wonderful polyptych of "Sano di Pietro" (Siennese School - 15 C). This piece was painted expressly for the parish of San Quirico, as can be seen by the red and gold coat-of-arms of the town and the presence of the patron saint. 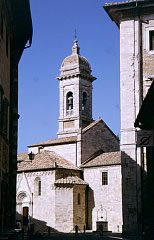 Palazzo Chigi
Next to the Collegiata and opposite the Palazzo Pretorio (magistrate's palace) - adjoining which, two mediaeval features can be seen - the "porte del morto" (doors of the dead) - rises the huge mass of the Palazzo Chigi. This palace was built in the second half of the 17 C by Cardinal Flavio Chigi, and is now the property of the town council. Unfortunately, due to negligence and harm suffered during the Second World War, the palace remains seriously damaged on its external structure and in its richly frescoed rooms.
Chiesa di San Francesco
The Church of St Francis, which faces the main square, has undergone numerous changes over the centuries. On the high altar there is a very beautiful Madonna attributed to Andrea della Robbia, which perhaps, originally, was part of an Annunciation. On the corbels in the presbytery, there are two wooden polychrome statues of the Angel and the Virgin Mary attributed to Francesco di Valdambrino, a pupil of Jacopo della Quercia.
Horti Leonini
The Horti Leonini, laid out by Diomede Leoni in 1580, is a superb example of the Italian garden. The enormous garden opens into a wide perspective flight, the effect of which is helped by the perfectly geometrical beds of box hedge. 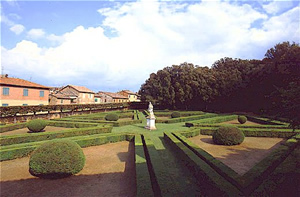 Starting at the bottom of the garden, an English wood extends up through to the large square at the top, which was once dominated by the old "torre del cassero", destroyed during the Second World War.
In the centre of the lower square, there is a statue of Cosimo III de' Medici, sculpted in 1688 and commissioned by Flavio Chigi in gratitude to the Grand Duke, who had nominated him to be Marquis of San Quirico.
Chiesa di Santa Maria Assunta
This church was mentioned in a Papal Bull of Pope Benedetto Vlll in 1017. The purity of line and its extremely formal severity make S. Maria a magnificent example of a small, single-aisled romanesque church.
Ospedale della Scala
The hospital, built in the 12 C, offered shelter to pilgrims and travelers passing along the Via Francigena. In the court-yard there is a l6 C well and a small loggia, partly blocked in, with three elegant columns.