Sansepolcro is a pleasant and interesting town located on the plains of the Upper Tiber Valley, in the southeast of Tuscany, bordering Umbria and The Marches.

Sansepolcro is a pleasant and interesting town located on the plains of the Upper Tiber Valley, in the southeast of Tuscany, bordering Umbria and The Marches. It is worth visiting for its ambiance, for its art works, to a lesser extent for its architecture, and if possible for the Palio della Balestra (crossbow tournament) held every year on the second Sunday of September when large numbers of citizens dress in mediaeval costume.

Sansepolcro is situated in an area of Italy historically populated by Etruscans whose principal cities were Perugia, Cortona and Arezzo (all within a 60 km radius of Sansepolcro). The Upper Tiber valley was covered in walnut trees that were a source of timber to both Etruscans and Romans. The Romans succeeded the Etruscans in the area and Birtugia, a Roman camp, was built where Sansepolcro is situated today. A number of Romans, including Pliny the Younger, build their summer villas in the Valtiberina, and Pliny praises the climate and the health of the natives in a famous letter.

According to tradition, Sansepolcro was founded in the 10 C by two pilgrims, Arcanus and Aegidius, who, returning after a long stay in Holy Land, brought with them a fragment of the Holy Sepulchre. They constructed an Oratory which, because of the holy relic, became an important spiritual site. The first historical records date from slightly later and refer to the construction of a Benedictine Abbey. The historical centre Sansepolcro reached its current size around 1400, and in 1500 Giuliano da Sangallo ordered the construction of its walls. Sansepolcro has been ruled by Milan, the Malatesta of Rimini and then Florence.

Sansepolcro was initially a fiefdom of the monastic order of the Camaldolesi but because of its important geographical position on the trade routes linking central Italy with the Adriatic, various city states have fought for control of it since the Middle Ages, beginning with the Camaldolesi (12 C), followed by Arezzo, represented by Uguccione della Faggiola (13 C) and the Signoria of the Tarlati family (14 C), passing under the power of the Ghibelline League for a short time and then in 1351 returning to the Tarlati family. In 1352 an earthquake practically destroyed the town. While rebuilding was underway, the Holy See of Città di Castello, represented by Guglielmo di Grisak, granted the town to Galeotto Malatesta, Lord of Rimini. In the 15 C, Sansepolcro  was acquired by Florence, with the support of Pope Eugene IV. In the 16 C, Pope Leo X conferred upon Sansepolcro the title of City under Florentine territorial jurisdiction. In the 18C, Sansepolcro passed under the control of Duke of Lorena. 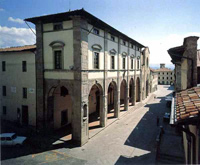 Visit Sansepolcro:
The belltowers of the Church of San Francesco and of the Badia, the present-day Cathedral, are easily recognized as among the recurring architectural elements in many of Piero della Francesca's works. The town of Sansepolcro, which developed around the large Benedictine Abbey, has conserved its medieval urbanistic structure and has, over the centuries, been enriched by important Renaissance and Baroque buildings. The Museo Civico houses such works by the painter as La Resurrezione , complex and symbolic, the polyptych of la Misericordia , San Giuliano and San Ludovico are evidence of the genius of the master of the early Renaissance. In the Cathedral, the Volto Santo , a wooden crucifix from the Carolingian period, is of great interest. Next to the Cathedral is the Palazzo delle Laudi, in manneristic style, and today, the Town Hall. Other architectural and artistic treasures are to be seen throughout the historic centre such as the Church of Santa Maria delle Grazie and the Church of San Francesco. A visit to the church of San Lorenzo which contains a painting of the Deposizione by Rosso Fiorentino is a must. The heart of the historic centre is the Piazza Torre di Berta, in which, on the second Sunday in September, the traditional Palio della Balestra is held, where the participants wear costumes inspired by Piero della Francesca's paintings. 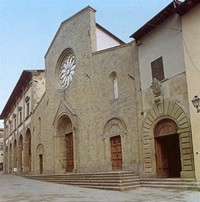 MUSEO CIVICO
The Civic Museum is known, above all, for the works by the painter Piero della Francesca (the Polyptich of the Madonna della Misericordia , the Resurrezione and San Ludovico e San Giuliano and also for an excellent collection of works by local painters from the XV to the XVII century.