Under the influence of Chiusi, the most powerful city of the Etruscan League, the area of Sarteano had been living a period of development since the remotest times. 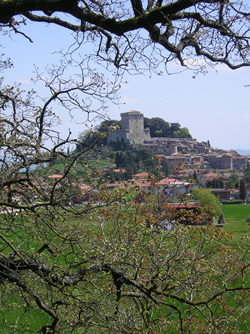 Inside the town of Sarteano, which is in the province of Siena at 525 m asl of altitude, the castle of Sarteano, the churches of St. Martino and St. Vittoria, the church of St. Frances, the convent of St. Chiara, the XV-century Palazzo Cennini and the XVI-century Palazzo Goti-Fannelli can be admired.
Under the influence of Chiusi, the most powerful city of the Etruscan League, the area of Sarteano had been living a period of development since the remotest times.
The presence of Chiusi on the little settlement continued during the Roman period until the Lombard colonization.
After the year 1000, the territory of Sarteano became a feud owned by the Counts Manenti who established their power until the second half of the XIII century.
Since 1280, Sarteano was raised to the status of an autonomous city-state, even though the Republic of Siena politically influenced it.
The Tuscan city was interested in this little village because of its closeness to the borders with Orvieto's and Perugia's dominions, with which it historically rivalled for controlling the Val d'Orcia and the Val di Chiana.
During the following years, the town repeatedly experienced the assaults and the occupations by one of these three cities while, at the same time, it tried to defend the rights of the Manentis so as to resolutely confirm its autonomy.
This troubled period, during which Sarteano entered the seigniories of Orvieto, Perugia and Siena (1379), ended with the great political overturning of Tuscany in the XVI century.
After the arrival of the Spanish, who supported the Medicis, the Tuscany Grand Duchy was created and it was an institution destined to rule the region until the Unity of Italy in 1860.
In 1556, Sarteano was annexed to the Medicis' state in the ambit of the process that gathered all the Siena territories into the new Grand Duchy. 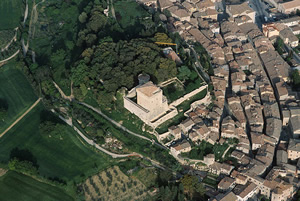 VISIT SARTEANO
Sarteano Castle
On a hill top located between the Chiana Valley and the beautiful Orcia Valley, soars the Sarteano’s Castle, around which expands the arch-shaped well preserved medieval town.
Of the four ancient walls – the last one of which enclosed the whole village - remains intact only that built during the Senese Republic around the half of the 15th century. It surrounds the central keep and on the east side it ends with two towers that can be reached by a watch walk. The Senese architectural intervention is marked by a lunette above the drawbridge which denotes the She-wolf and the black and white shield, the “balzana” - the characteristic symbols of Siena.

The Castle still preserves a few building elements which underline the importance it had as an impregnable defensive structure. In fact the thickness of the walls on the basis of the keep is about of seven metres and near the first drawbridge it is possible to see the ruins of an ancient trench that was filled with burnable material in case of siege .
A further interesting element, besides the lack of windows , is that till 1699 the only existing entrance was a stairway adjacent to the castle wall that across a drawbridge brought to the keep’s first floor in this way the enemy was exposed to the shooting of the defenders.
The original iron main gate at the end of the drawbridge reveals interesting engravings representing the families shields of the captains who lived in this castle keep. The central keep has four floors and its summit is crowned with a terrace from which one can admire the whole Chiana Valley, the Lakes of Chiusi and Montepulciano and the Trasimeno and the Cetona Mountain. On each floor are still visible rests of fireplaces, rudimentary lavatories and wash-basins in travertine stone.
The secret spiral staircase directly connects the last floor of the Castle with the ground floor: this interesting element was used, in case of siege, to escape using an underground walk – no more existent today – that led in the open country.
The oldest information concerning the Castle is dated to 1038 and it refers to a deed of assignment drawn up inside the walls of the central keep. Since 1379 Sarteano and its castle keep stipulated a protectorate agreement with Siena. Due to its strategic boundary position the Castle underwent several sieges, among which that from Caesar Borgia in 1503. After the Senese surrender in 1555 also Sarteano with its Castle was occupied from the Medici family, who made the fortress inoffensive by partially interring some of its defensive elements. In 1617 the Great Duke Cosimo II gave the Castle in legacy to Brandimarte Fanelli and to all his male descendants.

The Archaeological Museum
Situated in one of the most beautiful and old building of the village hosts all the finds of the Etruscan Necropolises of Sarteano. One of the rooms hosts and exhibition of the finds of the "Pianacce" Necropolis where the most beautiful and important discovery of the Etruscan world has been made: La Tomba della Quadriga Infernale" 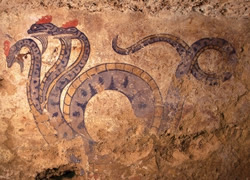 Spineta Abbey
The Abbey was founded in 1085 and is a fine example of Italian and Tuscan monasticism. It lies in an isolated but strategic position between the Val di Chiana and the Val d’Orcia. Although the architectural conformation which rendered it independent and closed to the outside world has altered slightly through the years, the Abbey is still an imposing sight as it stands alone in the midst of unspoiled countryside.
This was the monastic period: monasteries and abbeys abounded during the mid Medieval period, and along with the large landed estates of the nobility, others belonging to the Church and controlled by the abbots came into existence. Farming and craftsmanship flourished, and in the golden age of monasticism, a form of religious and civil government developed; the Vallombrosian Order, a reformed branch of the Benedictines. Life on the estate and in the Abbey was peaceful, dedicated to religious and farming activities; outside, constant feuding took place between the landowners and it was inevitable that, due to its proximity to the town of Sarteano and its Castle, the Abbey should eventually suffer the effects of these disputes. 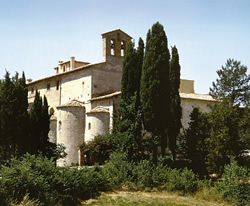 The Abbey was first placed under the dominion of the town of Orvieto(1120), it later became a protectorate of the Republic of Siena until it became part of the New State ruled by the Florentine duke Cosimo dé Medici. In spite of the precarious political situation, the Abbey reached maximum economic splendor during the 12th , 13th and 14th centuries giving rise to the need to defend its possessions by means of the provision of an armed garrison and the fortification of the monastery buildings. Traces showing where crossbows were positioned are still visible in the church. Even during these affluent times the monks adhered strictly to the rules of the Benedictine Order and their high moral stature lead to their being elected as investigators and judges in civil disputes.
In 1627 Pope Urbano VIII took the Abbey from the Vallombrosian Order and entrusted it to the Cistercian Order; it was on this occasion that the Pope gave the Abbey the precious cope which is presently on display in the church. The Abbey remained under the control of the Cistercian Order until the abolition of the smaller monasteries in 1783. From that date onward it survived as a farm taken care of by Cistercian lay brothers, and its administration was entrusted to the Spedale degli Innocenti in Florence. In 1830 the Abbey became private property and has had a succession of owners since then.