Saturnia is locates to little distance from the famous thermal sources, it is perfectly set in the sweet hilly landscape typical of the Maremma .

Saturnia is locates to little distance from the famous thermal sources, it is perfectly set in the sweet hilly landscape typical of the Maremma that it do the point of ideal departure of it for excursions in all the surrounding areas, being possible to reach, in about 50 minutes in auto, so much the sea how much the Amiata. The country, despite reduces to her dimensions, it is well structured under the profile of the services offered to the tourism.
His castle, suggestive and romantic, that is however private ownership... You will be able however to console the adjacent Door Roman visiting you, with relative street, and the square I Bathe Dry. 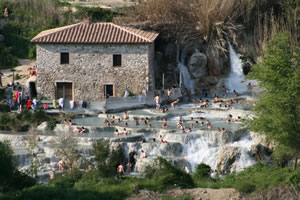 In the area of the city traces of a frequentazione of the age of the Final Bronze are been recovered (XII-X a.C.), while the most ancient necropolis, in the place said Center of Charles near the actual cemetery, goes up again to the period slow-villanoviano (VIII century a.C.). Is drawn, together with Marsiliana, of one of the most complete testimonies of this period, generally documented only from scarce sporadic recoveries.
Characteristic of this necropolis they are the vases cinerari with the cover surmounted by a sphere by to interpret as an attempt to give an anthropomorphous form to the vase.
At the end of the VIII century a.C. the necropolises increase of number and of extension on the two shores of the Albegna (Knoll Pancotta, Great Lawn, Sterpeti, Field of the Flushes, Pian of Palm, Strut, Casali, Crostoli). It is not known if this phenomenon were tied up only to a development of the urban center or also to a shed inhabited area in the surrounding territory.
The graves slow-villanoviane they are to grit. With the VII the graves appear to tumult, you build with great blocks and monolithic slabs (Pian of Palm, Strut).
Around half the V century a.C. also the necropolises of Saturnia as those of the other small centers of the vulcente, seem abandoned. The city comes rifondata in the IV century (how Sovana or Talamone). Inside the urban area layers of destruction and fire have been recognized datable then to the beginning of the III century a.C. and therefore contemporary and consequent to the Roman conquest.
With the conquest, Saturnia became an administrative center (praefectura) and subsequently, in the 183 a.C. colony. The colonization brought to a complete restructuring of the territory. The city had a regular road plant and one surrounded building of which a line is still seen out some Roman Door.
The territory was crossed by a great artery, the Street Clodia that put in direct communication with Rome and, through a release, with the coastal layout of the Street Aurelia. The country was separated in regular lotteries (centuriazione) and assigned to the Roman farmers and perhaps population buttocks local etrusca. Since from the beginning they appeared in the territory the typical agricultural villas of slow-republican and imperial age. You were also exploited certainly the thermal sources, even if they miss completely material rests. In imperial age the city had a monumental hole and public buildings of which little is known. The documentation epigrafica and archaeological it is followed AD up to the III century around, then him rarefà.
In the XII century Saturnia reappears in a document as castle and center pievana. Possession of the Aldobrandeschis, was contended then by the Communes in Siena and Orvieto. It was also dominated by the Basque of Montemerano and by the Orsinis of Pitigliano. In 1410 it was definitely conquered by Siena that they reconstructed entirely almost surrounded building and I will cancel. Subsequently the center was depopulated in so serious way by to risk the disappearance.

Excursions from Saturnia
To east of Saturnia and the course of the Fiora the Maremma changes face. Around the houses of lava stone, to the boundaries, to the buildings and to asked her of Pitigliano, Sorano and Sovana, the landscape it alternates vineyards and olive-groves to the depths valloni engraved in the tufo by the waters of the Lens, of the Fologna and of their tributaries. Toward south, it closes the horizon the Forest of the Lamone, the tangled forest of oaks and lecci that it has marked for centuries the border between the earths of the Granduca in Tuscany and those of the Pope, and that it sees to meet the Provincies of Grosseto and Viterbo today. The zone to make famous they are the suburbs strengthened of Pitigliano and Sorano and the Romanesque churches and the necropolises etrusche of Sovana. For the excursionists, the charm of this angle of the Maremma is in the variety of the paths, that that cross some panoramic highlands for then to penetrate him in the “streets cave”, the canyons in the tufo systematized and already used to the time of the Etruschis. Toward north, to the feet of the Amiata, the landscape becomes more ordinary. They surprise the traveller, in this zone, the small fortress of Castell'Ottieri and the rocky installation etrusco and medieval (but used up to the eight hundred) of Mountain Vitozzo, similar to the Stones of Matera. Close to the course of the Fiora it is the necropolis of Knoll Hole, a center that Etruschi and Romans they knew with the name of Statonia.