The most ancient document, which is dated back to 1188, in which Scansano is mentioned is a papal Bull by Clemente III and in 1274. 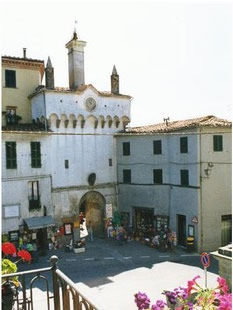 It’s believed that before 1.000 AD an inhabited area existed in the place where now Scansano rises.
The hypothesis is confirmed by the circumstances that the name of Scansano seems to derive from S. Ansano of the Anicia Family, Christian martyr of the 1st century AD.
The most ancient document, which is dated back to 1188, in which Scansano is mentioned is a papal Bull by Clemente III and in 1274, it’s also mentioned in the division act between the two branches of Counts Aldobrandeschi of Sovana and of Santa Fiora, to the second of which was assigned Scansano and its district.
Situated on a hilly ridge, natural separation between the lands set on the two sides, Scansano suffered different fates during the weary struggles between the Aldobrandeschi and the Republic of Siena.
Several times the "senesi" fought in Scansano and in 1330:
" la prima impresa fu contro la terra di Scanzano, che fu occupata per assalto e tutta messa a sacco e a fuoco sixcche’ appena i Conti (Aldobrandeschi) che in erano alla difesa, ebbero tempo con molti de loro a salvarsi fuggendo a Santa Fiora ". ( G.A. Pecci - Monografia di Scansano)
In 1331 the Counts submitted to the Republic of Siena :
" restituischino i sanesi a conti la terra di Scanzano , ma smantellata atterrata la rocca e ripieni i fossi ……. " (G.A Pecci)
Because of the marriage between Cecilia Aldobrandesci and Bosio of Muzio Attendolo Sforza of Cotignola in 1439 Scansano passes under the dominion of the Sforzas who had dominated it, together with others territories, for about two centuries.
In 1615 Mario Sforza gives Scansano and Pomonte to Cosimo II of the Medicis who sets the Medicis’ "arms" on the door of Scansano between 1617 and 1619 ,
( Main entrance to the historical centre ) .
In 1738 Scansano passes under the Grand duchy of the Lorenas becoming in 1776 office of podesta’ and comunity in 1783 including besides the chief town, Cotone, Montorgiali, Montiano, Poggioferro, Pancole, Collecchio, Polveraia, Pontepò and Pomonte.
In 1787, because of the Leopoldo’s reform, Scansano assumes the present dimension.
Since 1333 Scansano has been centre of the " estatatura ", that’s to say the transfer of judicial and administrative offices from Grosseto, marshy and malarial lowland , to Scansano.
When the Estatatura was officially abolished in 1897 Scansano becomes one of the most important Maremma village and, besides the remarkable existing private buildings, there are:
the hospital in 1862, the Castagnoli theatre in 1892, the activation of Scansano primary school in 1896.
The xx century, in addition to the increase of the cultural heritage, has seen the progressive reorganisation of the agricultural activity and the consequent affirmation of new technologies, especially in olive growing, livestock-breeding and viticulture.
The latter has led to the recognition of the Morellino of Scansano d.o.c. and to the expansion of the "Cantina Cooperativa del Morellino di Scansano" whose realisation had been already supported since 1884 by the illustrious Scansanese Dr. Vannuccio Vannuccini.

CONVENT OF PETRETO
The castle of Petreto was mentioned for the first time in writings, which date back to 1274, about the occasion of the division between the two branches of the Counts Aldobrandeschi (Earl of Saint Fiora and of Sovana) and it was submitted to the dominion of the Earl of Saint Fiora.
Transformed in Franciscan oratory, the castle was subdued to the Republic of Siena in 1339.
It seems that the oratory has entertained St. Bernardino from Siena in 1422.
In 1507 the count Guido Sforza opened the convent with its relative church dedicated to St. Pietro to the Petreto.
The convent part is, at present, a private property whereas the church is part of Scansano’s parish property.
To visit the church ask for information to the priest of Scansano telephone number 0564-50 72 39

ARCHAEOLOGICAL AREA OF " GHIACCIO FORTE "
The etrurian settlement "Ghiaccio Forte " was located in 1973 thanks to some excavations that , besides wide parts of the boundary walls, brought to light the structures of the urban plant.
The following excavations, even if they were brief excavations, last of which dates back to 1981, have allowed to verify the destruction of the inhabited area after a fire, the identification of a "stipe votiva" rich in bronze and pottery, the identification of an oven for melting, the location of three entrances to the inhabited area and some rooms.

CASTLE OF MONTORGIALI
The first news about the castle and the court of Montorgiali are in a Bull by Clemente III in 1188 addressed to the Bishop of Grosseto.
The castle, of mighty look because of its structure (facciavista) was built on the top of a knoll and has still today important arched windows and shelves of "piombatoi" which are now disappeared.
The castle and the village suffered the ups and downs deriving from the hostilities between the Aldobrandeschi of the branch of St Fiora and the Republic of Siena.
The counts of Montorgiali, who were at first vassals of the Aldobrandeschi, in 1224 sided with Siena and supported expensive wars that forced them, to face the expenses, to cede the rights of some properties among which Castiglioncello and its relative district.
In 1378 Montorgiali was sold to the Republic of Siena.
The Castle of Montorgiali, transformed in a residence, is now a private property. 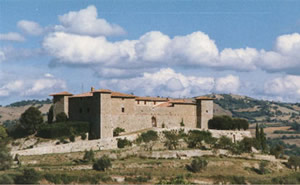 CASTLE OF MONTEPÒ
The Castle of Montepò, built by the noble Roberto Sergardi from Siena in the first half of the 14th century is 7 Km from Scansano.
Montepò is a strengthened farm, or castle – enclosure, which during the years has been object of extensions that have given it the present rectangular plant provided with 4 towers, one for each corner.
The access to the wide inner courtyard is situated on the south-west side and it was protected, in the past centuries, by the dominating "caditoia a camino" and by two "balestriere" (two loop–holes for shooting arrows with the crossbows) that are situated on the two towers on the sides of the entry.
The Castle of Montepò, recently restored, is a private property.