The importance of the walled town of Scarlino and its castle is clear in the etymology of the name. 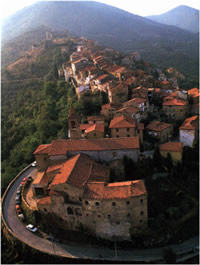 The importance of the walled town of Scarlino and its castle is clear in the etymology of the name: although some considers it may be derived from the ancient Roman port called 'Porto Scabris' situated once on the underlying coast, it seems more probable a connection with the Longobard word 'Scherl', that means 'Sentinel'. In fact, thanks to its extraordinary position, from which is possible to dominate the whole lowland and great part of the coast from Piombino to Punta Ala, the castle played an important role of 'guardian of the sea' with the task communicate the coming of enemies and pirates to the nearby inland cities.
The birth of the town and the construction of the stronghold as crown of the strategical rocky relief of Scarlino, instead of the more favorable for the commerce and communications location next to the sea , was due to the fact that, in the years immediately following at the collapse of the Roman Empire and in concomitance with the barbarian invasions of Italy, the underlying plain became an immense and unhealthy swamp, because of the combined action of the sea tides and the alluvial deposits of the river Pecora.
The first notices of a fortified settlement called Scarlino goes back to the year 973, but it is impossible to establish what was its aspect at the time. Later the castle's ownership passed to the counts Alberti of Prato and Mangona. All the 12th century parts of the castle are owed to the noble Aldobrandeschi family of Sovana, that acquired Scarlino thanks to the marriage of Ildebrandino Aldobrandeschi with a daughter of the Count Alberto Alberti. 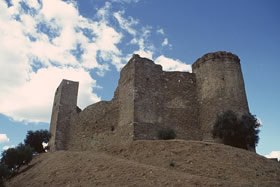 In 1164 Scarlino was conquered by the Army of Pisa. The Pisanes strengthened the fortification of the town in order to make Scarlino the stronghold at control of the surrounding area, important for their commercial purposes. Due to this the castle is also called 'Rocca Pisana'. Subsequently, around the 1240, Scarlino was one of the first countries of the Maremma to organize itself as free common [city-state]. Since 1399, and until 1814, the town was part of the municipality of Piombino.
The castle has an irregular shape with five sides and is connected to the town walls. The city walls are chained at the northwest angle of its main front, the less exposed of the fortification. The opposite side connection, at the southwest angle, has disappeared. Near the castle, in the highest point of their lenght, the walls are endowed with two round towers. All around the village are still visible other large sections of the town walls with the 'Porta Senese' on the northern side.
The External defenses, constituted by a crenelated walled enclosure [almost a continuation of the town walls] are present only on the northern and western sides of the castle, the most exposed toward the town, and are protected by a ditch dug in the rock. The unique gate, once endowed with a drawbridge, is opened in the western curtain. The inner courtyard separate the outer defenses from the inner enclosure, core of the castle. 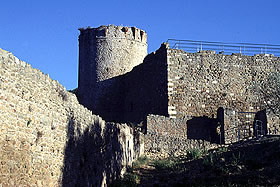 Two sides of its highest walls are not reinforced with towers, but in the angles there're remnants of brackets to testimony that the walls were gifted of machicoulis (opening between corbels of a parapet through which the defenders can drop rocks or fire projectiles against an enemy directly below them).
The other three sides are turned to the sea and a tower rise on every angle: the southwest squared and more tall (being the only one directly turned to the sea and used as watch tower), the southeast one is disposed as a 'spur' out of the walls to have the possibility of a draught fire from its loopholes: these two were surely part of the most ancient nucleus of the castle and preserve remnants of the stone brackets from which leaned the timber hoarding; the northwest tower with its round shape was one of the last Pisane addictions. The only gate of access is opened on the most protected front, the north, with a beautiful gothic arch in travertine. Recently restored the castle is used by the local authority for manifestations, especially in summer. It Is freely visible from the outside.
The beach of Cala Violina, it's a sandy bay of great beauty, it has been rewarded from Legambiente like one of the 11 most beautiful beaches of Italy in 2004 and 2005. Cala Violina, is enclosed between two promontories and is characterized by withe sand and from particularly transparent waters with sea bed of rare beauty, forms from prairie of Oceanic Posidonia and great sandstone masses, between which are noticed fish of all the dimensions. The Oceanic Posidonia, seaweed that has a very important role in order to contrast the erosion of the coasts, for the oxygenation of waters and index of crystal-clear waters, it covers with its remains from the seas storm also part of the beach.

Cala Violina
In Cala Violina, dipped in the scrub we find tables and benches for pic nic, and a wide beach with a limpid and crystalline water. The name of the beach derives from the nature of the white and most fine sand, it's therefore so particular to produce rising of “sound of violin” when you walks knots on foot. The shoreline is encircled from a green landscape formed from a thich and flourishing Mediterranean scrub.