Scarperia became the seat of the Vicariate, the representative of the administrative and judicial power of Florence.

Scarperia history
1306- after defeating the Ubaldini, the ancient feudal lords of Mugello, on the 18 th of July the Council of One Hundred of the Florentine Republic decided to construct a “new land», Castel S. Barnaba, in the place known as “la Scarperia” on the road to the main Giogo pass connecting Florence and Bologna. On the 7 th of September the streets and city walls were designed before the rural inhabitants gathered together in the new centre which was to be officially founded the following day, with ten year’s of exemption from taxes and levies for all those deciding to build their house there. 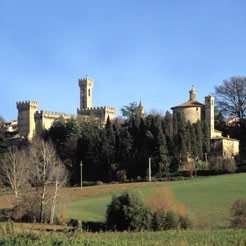 1415- Scarperia became the seat of the Vicariate, the representative of the administrative and judicial power of Florence. All the vicars (governors) had their coat-of arms- sculpted or painted in the palace. The Vicariate of Scarperia included the boroughs of Barberino di Mugello, Borgo San Lorenzo, Campi, Carmignano, Dicomano, S. Godenzo, Sesto, Fiesole and Vicchio. Trade thrived in Scarperia thanks to its strategic position along the road to the Giogo pass, leading to Emilia-Romagna and Northern Italy. There were very many hostelries and inns here in the XV and XVI centuries as well as craftsmen’s workshops, especially those forging iron and producing agricultural utensils and knives.
1752- the new Lorena government built the Futa carriageway to improve traffic across the Apennines, thus cutting off Scarperia from the passing trade which had made its fortune. Hostelries, taverns and inns closed down and even for the knife-makers life became difficult. In the first decades of the nineteenth century there were only about 50 left.
1908- the law prohibiting the sale and use of spring-knives longer than the palm of the hand was another blow to the knife-making trade which survived however through alternate vicissitudes until its comeback in recent decades. 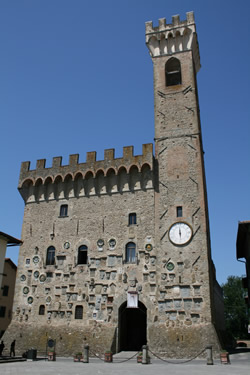 Visit Scarperia
Palazzo dei Vicari
The Palazzo dei Vicari is the result of a series of additions made to the original nucleus of the tower. During the 1300s a building acting as the Captain’s residence was added to the tower; in 1366 much work was done to the castle including work on “ the Chamber of the Keep”, the “restoration” of the archers’ tower and of the “four merlons that fell and broke on the watchman’s tower”.
The XVI century was key moment as regards the layout of the Palace; following the earthquake of 1542 there had been much damage to the building, the restoration of which gave the Palace an appearance similar to that of today (at least as far as the Vicar’s residence and the reception rooms were concerned).
The rebuilding had also led to the definitive positioning of the prisons, set in the vaulted rooms on the ground floor (now the loggia). Modifications and repairs were to continue to interest the Palace throughout the 1600s after another earthquake on the 8 th of September 1611.
The repair work was finished in August 1612 and at the end of it the palace had partially changed its appearance. Barbicans to strengthen the walls, a roof sloping onto the facade, plastering of the facade and the repair and texturing of the great side wall leading to the S. Agata gate, were the works most evident on the outside of the building.
A few more changes and the Palace took on the morphological features which were to remain unchanged until halfway through the XIX century when the building once again underwent restoration work and was reorganised.
The damage following the 1960 earthquake, together with the precarious state of the foundations, were the subject of intensive consolidation and restoration work (starting in 1980) ending in 1999 with the restoration of the monumental quarters and the rebuilding of the north wing where the Museum of Knives is now situated. 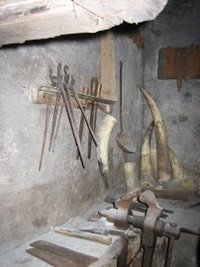 The Knife Museum
In the Museum-place of memory, interconnected documents and collections are arranged so as to enable the visitor to interpret the utensil through an examination of historic facts.
The layout of the museum begins with the story of the knife in its many forms present in human actions, confirmed by pictures taken from Italian art. By using a manual approach (assembly counter) it’s possible to see the various components of different types of knife. The visitor can himself put a knife together and thus see the complexity of apparently simple utensils like the table knife. An itinerary that ranges through the production of knives and blades in various Italian centres enables a comparison of materials, techniques and objects very distant from each other, both geographically and temporally.
The culture and production of knives in Scarperia is the highpoint and fulcrum of the museum itinerary; the life and work of the knife-makers’ families in Scarperia unfolds through memories, stories and topical issues, in pictures and in reconstructions of the workplace, of the social and family order, of the controversial relationship between the crafts professions and the farming world.
The displays of knives, the construction features, the breadth of the range of production in Scarperia are reflected, finally, by objects which speak for themselves, like the work knives with the blade finished by the numerous grindings, the delicate “palm-knives”, desk pen knives and the ever-popular Scarperia “zuava”.
The knife-maker’s workshop (Via Solferino, 15) is the part of the museum where the various phases of the craftsman’s production of knives can be observed directly, heightening the emotion of the visitor. The forge, work counter and anvil were the equipment that the work of the knife-maker was centred around, helped in the less heavy work by child-workers and by the “giratora” (female labour whose sphere of competence was limited to turning the grindstone for grinding the knives).
Various expedients have been used to permit the handling, disassembly and re-assembly of the knife so as to feel its size and form in relation to the intended use. The Museum of Knives belongs to the “Museo Diffuso” museum circuit of the boroughs of Barberino di Mugello, Borgo San Lorenzo, Dicomano, Firenzuola, Londa, Marradi, Palazzuolo, Pelago, Pontassieve, Reggello, Rufina, San Godenzo, San Piero a Sieve, Scarperia, Vaglia and Vicchio.
The Knife Museum
Palazzo dei Vicari, tel. 055/8468027-8468165:
15th June- 15th September: Saturday and holidays - 10.00 a.m. - 1.00 p.m., 3.30 p.m.- 6.30 p.m. Wednesday to Friday - 3.30 p.m. to 7.30 p.m.

The Knife-maker’s workshop
An appendix to the Knife Museum, this is a sort of living museum where the various phases of the craftsman’s production of knives can be observed thanks to local craftsmen who work on the assembly counter, in a workshop that has not changed all that much since the Forties. Involvement of the visitor is total: the forge, work counter and anvil are still there to testify to the knife-maker’s craft, helped in the less heavy work by child-workers and by the “giratora» the woman who turned the grindstone for grinding the knives.