Founded by the Etruschis, Siena was Roman colony to the time of August. 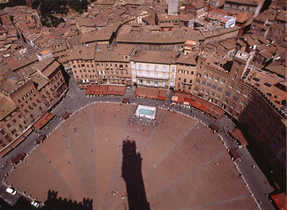 Founded by the Etruschis, Siena was Roman colony to the time of August. It became Episcopalian center in 700 after the occupation longobarda, but in the XI secolo' was affirmed as secular commune. Sour struggles divided Siena from Florence, so much that this last, in 1260, Montaperti was defeated to.
After being governed by varied dominions, the city fell under the imperial dominion and entered to belong to the state Mediceo, then of that Lorenese up to 1859, gives in which was attached to the Kingdom of ltalia.

The beautiful view of Siena and its territory painted in 1338 by Ambrogio Lorenzetti in Siena’s Palazzo Pubblico to illustrate The Effects of Good Government under the Council of Nine is not only one of the most famous images in medieval art, but also an extremely meaningful testimonial to the extent to which the city and countryside were integrated at the time of the ancient Republic of Siena.

The civilization and culture of Siena are the fruit of this integration, manifested today not only in the evocative medieval appearance of the city but also in the enchanting landscape of the surrounding territory, which was shaped not only by the remarkable achievements of the finest Sienese artists but also by centuries of daily labor.
A network of museums spread throughout the Sienese territory now offers an extraordinary opportunity to comprehend this fact in all its complexity, offering the visitor some thirty museums, very different from each other in size and subject matter. They house materials exemplifying the archaeological, art-historical, and anthropological heritage of the area of Siena, set in the context of the land where these materials were produced.
This system of museums thus represents a unique witness to the stratified cultural identity of the Sienese area, documented not only by priceless archaeological finds from prehistoric, Etruscan, and Roman times and inestimable art works from the Middle Ages, Renaissance, and later, but also by vestiges of the peasant and industrial worlds, investigated through specific museum itineraries. 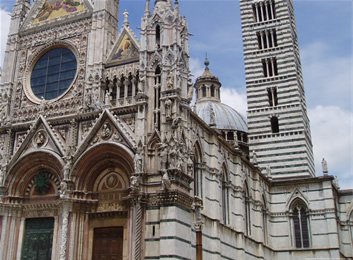 Prehistory and antiquity
The earliest traces of human settlement in the province of Siena are found in the area of Monte Cetona and are today documented by archaeological and prehistoric exhibits in the Museo Civico per la Preistoria del Monte Cetona and the Parco Archeologico Naturalistico di Belverde, where the phases of the inhabitation of these sites can be traced from the Paleolithic period to the Bronze Age.
With regard to the Etruscans and Romans, once again it is the southern part of the province – dominated by the powerful lucomony of Chiusi – that preserves the most important evidence, as shown by the material on display in the epigraphical section of the Museo Civico in Chiusi, the Museo Civico Archeologico in Sarteano (containing the reconstructed late seventh century B.C. Etruscan chamber tomb featuring a pair of Canopic jars for the deceased couple’s ashes) and the Museo Civico Archeologico delle Acque in Chianciano Terme (with the beautiful remnants of a terracotta acroterion datable around 150 B.C., found at a site called I Fucoli). 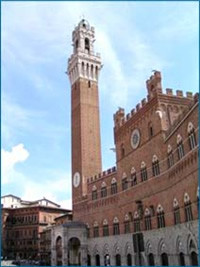 But the signs of Etruscan and Roman civilizations are visible all over the Sienese territory, as evidenced by the material in the Museo Archeologico in Colle Val d’Elsa or the archeological sections of the civic museums of Asciano, Casole d’Elsa, and San Gimignano.
Very fine terracotta pieces from two Etruscan palaces that once stood on Poggio Civitate can be admired today in the Museo Archeologico in Murlo.
Art from the Middle Ages to the Modern Age
During the late Middle Ages, Siena was one of the great European capitals. The city’s strategic position on the Via Francigena facilitated trade for its merchants and brought great wealth to a city that was able to administrate itself democratically and enlarge the boundaries of its territory until it covered a large part of southern Tuscany.
In this favorable context, the figurative arts developed enormously, giving rise to what became a real Sienese school in its own right. From the late thirteenth to the early sixteenth century, Siena (even though in 1559 it lost its autonomy and was absorbed into the Grand Duchy of Tuscany) benefited from the activity of painters, sculptors, and architects of the highest level, who shaped the current face of the city and of its surrounding territory.

The Sienese Museums house an impressive number of works by these artists, which still today astonish visitors with their quality and elegance. Siena’s Museo Civico, located in the city’s Gothic Town Hall, the Palazzo Pubblico, presents some of the most famous wall paintings by artists of the caliber of Duccio, Simone Martini, Ambrogio Lorenzetti, Spinello Aretino, Taddeo di Bartolo, and Domenico Beccafumi. Beccafumi was the leading protagonist of Mannerism in Siena and worked, along with Sodoma and Pacchia, also in the Oratorio di San Bernardino, which today houses the Museo Diocesano d’Arte Sacra of Siena, with its wealth of priceless paintings, including the outstanding masterpiece by Ambrogio Lorenzetti, the Madonna del Latte, showing the Virgin Mary nursing the Christ Child.
Moving out from Siena and traveling south along the ancient route of the Via Francigena, we come to town after town that once were part of the State of Siena and today preserve their treasures in small but delightful museums. Outstanding examples are the Museo d’Arte Sacra della Val d’Arbia in Buonconvento (containing, among other fine works, three very touching images of The Virgin and Child by Duccio and Pietro Lorenzetti), the Museo d’Arte Sacra in Asciano (with an expressive Crucifix by Giovanni Pisano and refined fifteenth-century panel paintings by Pietro di Giovanni Ambrosi and the anonymous artist known as the Osservanza Master), the Museo Civico e Diocesano d’Arte Sacra in Montalcino (with reconstructed polyptychs by the fourteenth-century painter Bartolo di Fredi and late Gothic sculptures by Francesco di Valdambrino), and the Museo Diocesano in Pienza (with a luminous altarpiece by Vecchietta and an elaborate cope that once belonged to Pope Pius II).
Not far away, standing guard over the Chiana Valley, is Montepulciano, whose Museo Civico presents not only works of the Middle Ages and Renaissance, but also a rich collection of sixteenth to nineteenth century paintings donated to the town in 1861 by the archpriest of the Collegiate Church, Francesco Crociani.

North of Siena is the area of the Elsa Valley, which in the Middle Ages was a border territory, since a large part of it belonged to Florence. The most outstanding museum in this area is the Museo Civico of San Gimignano, located in the town’s Palazzo Pubblico, containing works by Memmo di Filippuccio, Lippo Memmi, Benozzo Gozzoli, and Pinturicchio. The Museo Civico e Diocesano d’Arte Sacra in Colle Val d’Elsa houses, among other works, an extremely rare Ostrogothic set of liturgical vessels for celebrating the Eucharist, dated in the sixth century A.D. (called the “treasure of Galognano”). The Museo Civico e della Collegiata in Casole d’Elsa features a masterpiece of Gothic sculpture (the “Porrina” tomb by Marco Romano) and paintings by the late Mannerist artist Alessandro Casolani.
The world of work, tradition, and science
A strong characteristic of Sienese civilization is a love of the land, which can be grasped at first glance in the quality and beauty of the landscape (which even has its own museum in the Museo del Paesaggio in Castelnuovo Berardenga). This landscape is very often the result of centuries of constant intervention by man and of a peasant culture recounted in the Museo della Mezzadria in Buonconvento, the Museo Etnografico e del Bosco in Orgia, and a special itinerary through the Museo della Grancia at Rapolano Terme (housed in an ancient fortified farm belonging to the historic hospital of Santa Maria della Scala in Siena) which illustrates the cycle of olive oil production. The visitor can learn about holidays, festivals, and peasant performances in the exhibition space in Monticchiello dedicated to this subject and entitled tepotratos. Scenes from Traditional Tuscan Folk Theater.
Distinctive artisan and industrial activities characterize numerous places throughout the province of Siena, which are documented in several museums: the Parco minerario at Abbadia San Salvatore, located inside what were once some of the most important mercury mines in the world; the Museo del Cristallo in Colle Val d’Elsa, a town known the world over for its production of crystal; the Museo della Terracotta at Petroio, featuring work in clay and terracotta; and the Museo del Tartufo in San Giovanni d’Asso, dedicated to the rare and precious truffles found in the woods nearby.
A final group of museums is devoted to science, such as, in Siena, the Orto Botanico (an ancient botanical garden first planted in 1588) and the Museo di Storia Naturale Accademia dei Fisiocritici, a natural history museum that includes a room dedicated to the Enlightenment scientist Paolo Mascagni; in the countryside the Museo delle energie e del territorio di Radicondoli, illustrating various ways of producing energy; and in San Gimignano the Spezieria di Santa Fina, which reproduces a “preindustrial” pharmacy, and the Museo Ornitologico, devoted to birds.

Museums:
Museo Civico
Located in one of the most important Gothic public buildings, it houses masterpieces of Sienese art and history.
Santa Maria della Scala
Museum complex of the ancient Siena Hospital. Frescoes, art works and treasures accumulated over its millenary history.
Museo dell'Opera Metropolitana
It houses objects and works of art chiefly from the Duomo, including some famous Sienese and Tuscan school masterpieces of the 13th to the 15th century.
Pinacoteca Nazionale
The largest collection of Sienese painting, including its greatest masters, from the 12th to the mid 17th century.

Torre del Mangia
87 metres high (102 including the lightning conductor) the Mangia Tower is in Piazza del Campo next to the Town Hall. Begun in 1325, as a symbol of the power wielded in the Town Hall, it was completed in 1348.
Museo Archeologico Nazionale
A rich heritage of exhibits and wide ranging documentation on the history of Sienese territory from prehistory to the Roman age.
Archivio di Stato
Collection of paintings on wood by the best known Sienese artists. Dating between 1258 and 1682, they are of great artistic and documentary value with regard to Sienese history and town-planning.
Santuario e casa di Santa Caterina
The Sanctuary includes parts of the saint’s house and other adjacent spaces, transformed into a sanctuary in 1464.
Orto Botanico
Splendid green area in the heart of the city containing numerous species of plants from all over the world.