Sovicille is situated at about 10 km west of Siena in the direction of Massa Marittima and Follonica. 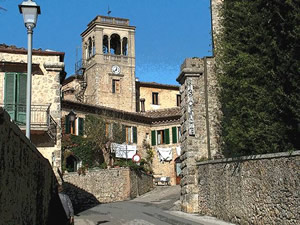 Sovicille is situated at about 10 km west of Siena in the direction of Massa Marittima and Follonica.
The territory of the commune ranges from 200 and 618 metres of altitude, with a total area of 14.376 hectares, and it is one of the largerst of the 36 provincial communes.
The most populated areas of the commune are S. Rocco a Pilli and Rosia..

Historical Notes
Sovicille’s territory stretches from La Montagnola Senese to the valley of the river Merse. The landscape varies: from woodlands in the hilly area of Poggio di Siena to Poggio La Torretta, to intensley cultivated in the flatter area between Ampugnano and Orgia. Proof of prehistorical human settlements have been found in the area: findings from the Stone Age at Personata,in Piana dello Spino and at Brenna; findings from the Bronze Age at Cetinale, at Partena, at Poggio di Siena Vecchia and at Montarrenti; findings from the Iron Age at Cetinale, around Rosia and at Poggio di Siena Vecchia.
There have also been many findings of Etruscan settlements: in La Valle del Luco, Poggio alla Piana, Ancaiano, Cetinale, Partena and Toiano.
Evidence from Roman times can be found at Stigliano, Rosia, Palazzone, Caggio di San Rocco a Pilli, Poggio Luco near Malignano, Barontoli, Simignano, Toiano and Sovicille.
Evidence of Bizantine and Longobard settlements are at Filetta, Caggio di Sovicille and Orgia.
Many churches were built between XII and XIII c. and with the formation of the Communes (Siena 1130), the churches of Pernina, Molli, San Giusto a Balli and the vicarage of Trecciano remained part of the Diocese of Volterra. The churches that became part of the Diocese of Siena were S. Lorenzo Martire, situated inside the old castle, S. Maria of Ponte allo Spino, and the churches at Rosia and at Recenza. In the same period tower-houses were built (Palazzone of Sovicille and Palazzaccio of Toiano), castles (Celsa, Montarrenti, Cerreto Selva and Palazzo al Piano „Balbiano“); mills (Molino del Pero at Brenna, Molino del Palazzo and the Molinello of Torri). The Commune of Sovicille had more medieval hamlets and villages (about 55) than any other commune in Tuscany, of which some have been destroyed, others transformed into farmhouses and yet others still have maintained their original state (the Palazzaccio of Toiano is a typical example). Some hamlets like Tonni,Toiano, and Tegoia are very pretty because they have remained unaltered, as if time has stopped altogether. At the end of XV c, Baldassare Tommaso Peruzzi, one of the most important artists and architects of the Rennaisance, was born at Ancaiano. His work can be admired all over the communal territory.
During a time of crisis, due to the fall of the Repubblic of Siena in 1555, there was a lull of the economical, artistic and architectual growth that went on until about 1650. The parish church of Ancaiano and the Villa of Cetinale were built at the end of XVII c. Later other villas were built at Toiano, Sovicille, San Rocco a Pilli and at Ucciano. Straight after the Unification of Italy, a lot of important restauration and conservation work was made on the hamlets and villages, enabling them to reach us in such a good state today. This thanks to a contribution of the new State.

Discover Sovicille
From a distance Sovicille seems to be a little island in a sea of green woods. Approaching the village, the Nuti-Palmieri Manor strikes you with its beauty and the elegance of its staicase which descends towards the park. It is now the Lechner Manor. The way the building tends to curve shows how it was made on the village walls. Still visible today are the last of the circular walls (dating from 1479) in the building, in the remaining parts to the west and in other houses (also erected upon the old walls).The elliptic structure of the central part of Sovicille proves its Etruscan origins. It was typical of this population and later of the Romans too to found their villages at watersheds on the hills for defesive reasons and also to avoid flooding and malaria.
According to some historians Sovicille comes from “Suavis locus ille“ (that lovely place), but it seems to be more probable that it comes from the Greek sukon-siconio which means the flower of a fig tree, in latin sofficum.This because, many fig trees grew here. The name of the ancient castle Suffichillum appears for the first time in the Sienese State archives in 1004 .The centre of Sovicille has remained the size it was in the year 300. This because of wars, fires and plagues.The most terrible plague struck Sovicille in 1348 and from May to August it decimated the population, as it did in Siena.
Entering the village and looking at the curvy street Via Roma and the ancient stones of n.27 (where the Pro Loco offise is), you understand that the houses on the right are built on the first circular walls of the medieval castle. The house with the civic number 30 was built in XVII c. as the praetorial building. The coat of arms on the left of the building is of the Niccolini family, one of the first mayoral families, come from Siena after the fall of the republic (1555).Number 26, the building with the whole arches, now filled in, is from XVI cen. There is a portico at the beginning of the road in Via Valfonda, which is fortunately still whole, that dates back to XVI cen. by Baldassare Peruzzi. The rectangular shape of the square leads us to think that in the early Middle Ages, like the Romans, the Longobards fortified it using four towers in the corners, with the ancient roads cardo and decumano that met at a right angle.These roads have of course disapeared, but one can be traced in the tiny road next to the church ( now closed by a building) and on the Porta Senese to the east, now private property.Evidence of the ancient towers can be found in documents and at the base of the church tower. The last tower was destroyed in 1864 and, in its place, the Town Hall we see today was built.The oldest buildings are the one at the north, with its remains from the year 200 ( a collumn you can see from inside the bar), the one next to the Town Hall and the other large one in front. Next to this there is a building with some arches that have been filled in which dates back to XVIII c., probably rebuilt according to Perruzzi’s drawings.There are small tunnels, under the square, dug through the rock in medieval times, probably to escape from sieges. There was a well for the water supply of the population until the 1920’s, where the war memorial stands.The square’s shops were stables for donkeys up to the middle of the last century, because Sovicille was a village of coalmen, woodmen and carters.

The Parish Church of S. Lorenzo Martyr
The church is situated in the square of the castle. It is first mentioned in the Communal Statutes in1237.It was built on the old circular walls of the castle as you can see looking at the lower part of the bell tower, in romanic style, that has been erected on the base of a tower. The church was suffragan to the Church of Ponte allo Spino up to the beginning of XIV c. when it was transformed from just canonical church of the castle to parish church.
The building has one nave and is slightly neogothic; it was restaurated at the end of XIX cen. changing its orientation and entrance.
The most important finding is the architrave of the little entrance on the left of the church, which could be pre-medieval or even bizantine and was probably transfered from the Church of Ponte allo Spino during some works that took place around the beginning of XIII c. On the architrave there is a sculpture of a ludo venatorio (a hunting down of the evil spirits), where there’s an armoured knight, a man with a quiver and an archer that are fighting a dragon.
In earlier times the church was dedicated to the saints Agata and Lorenzo. Inside there is a beatiful frescoe attributed to Giorgio di Giovanni, follower of Beccafumi (1538-1559), which rappresents the Madonna and Child between Saint Christopher and Saint Onofrio on one side and the saints Lucia and Martino on the other.The painting in the right chappel rappresents the Madonna and Child between Saint John the Evangilist, the Archangel Michael, Caterina d’Alessandria, Agata, Lorenzo, Pietro and the Cherubines at the top. This has been attributed to Alessandro Casolani (1552-1553/1607).The painting in the left transept is attributed to a follower of Riccio. The altar and the presbytery are of yellow marble (Broccatello) from the Montagnola.
At the entrance, to the left there is a frescoe donated to the church with marble inlay work, by Rolando Montagnani and Paolo Angeli. This frescoe rappresents the Patron Saint of the church and the commune: S. Lorenzo the Martyr. 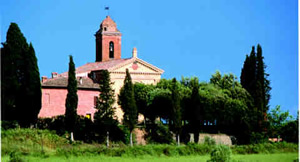 SAN ROCCO A PILLI
This populated fraction of the Commune of Sovicille has grown a lot in these last decades along the slopes of the hill on which stands out the bell tower of the parish church.The village originally grew along the Etruscan road that went from Siena to Poggio Civitate and Roselle (GR).In 1270 there was a cart road that was used to transport goods coming from Piano della Selva to Siena and viceversa, on which S. Rocco first appears to have been only a few houses.
In 1561, according to the will of the nineteen people that populated the place, the brotherhood of San Rocco was founded and which later gave the name to the place.

The Church of San Bartolomeo
This church was erected on the highest point of S. Rocco and has quite a history behind it.It is of medieval origin and was already mentioned in 1389. In 1635 the font was added enabling it to become a parish.Having being built on friable ground it has often had to be closed and restored.
In 1824 the noble family D’Elci, owners of the nearby villa Cavaglioni and of a vast estate had the church rebuilt according to the drawings of the architect Agostino Fantastici.
Another very well accomplished restoration has taken place in recent years so the church is open to the public. 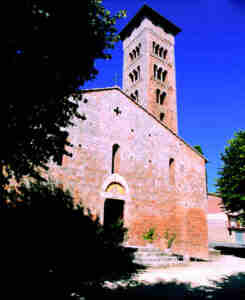 The Parish Church of S. John the Baptist
The church is already mentioned in the XII c. and its importance spread over all the territory.At the end of the XVI c. it was a vicarage and embraced Sovicille, Torri, Orgia, Pentolina, Stigliano and Brenna. In the XIV c. important modifications were made, infact the whole church was turned around; today’s front face was originally the back of the romanic building.
The church is rectangular and divided in tre naves by four large crossings sustained by four square pilars which have had their corners cut off so that they look more like crosses.Inside, on the wall on the right of the door is the font by a Sienese artist in 1332,which rappresents Christ’s babtism amongst five angels.Over the alter on the right side of the church is a painting by Guidoccio Cozzarelli: the Madonna on a throne with Baby Jesus, S. Sebastiano, and S. Antonio Abate of the XV c. The roof is of wood.
The facade is beautifully decorated and has still the three romanic windows which would have illuminated the presbytery.The most important part of the church is its bell tower on the right side.
It is very well conserved even though the crenellation is quite recent.It is made up of a succesion of levels with one, two, three, four openings and with each level divided by little hanging arches.
The Lombard style is obvious and can be considered one of the most beautiful romanic bell towers in Tuscany, even though it seems to be one of the most recent of the area.