The Municipal territory of Stia extends in the Casentino for an area of 62,71 square kilometres at the foot of Monte Falterona, and is crossed by the high course of the Arno. 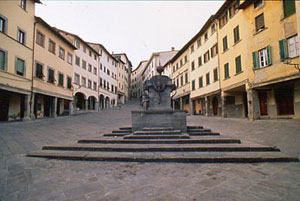 The Municipal territory of Stia extends in the Casentino for an area of 62,71 square kilometres at the foot of Monte Falterona, and is crossed by the high course of the Arno. A Roman settlement on the road which rises from the Arno, crossing the Apennines to reach San Godenzo, it was a feudal centre ; from 1872 an autonomous municipality, united to Pratovecchio in 1929, it reached its present day aspect in 1934 with the aggregation to it of the districts of Papiano and Ponte d’Arno, taken from the Pratovecchio territory, and the zone comprised between the river Arno, the streams Vicena and Asinaia and the borders of the province of Firenze.
Recorded in a document of 1054, Stia belonged to the Porciano branch of the Counts Guidi and was for centuries the “mercatale” (marketplace) of the aforementioned Castle. Around 1230, Count Baldino had a sumptuous dwelling constructed, called il Palagio, on the banks of the Staggia stream, from which developed a new conglomeration which joined itself to the village already in existence on the mountain, renamed then as Stia Vecchia. It was like this that the branch of the Counts called “di Palagio” was started, they maintained possession of the land of Stia until the village was put under siege by the Fiorentina republic (1402) and Count Antonio who was the last of this branch was ousted. Under the trust of Firenze the Municipality of “del Palagio Fiorentino” was constituted, the result of the union of the Municipality of Montemezzano with the rural residences of Lonnano, Papiano, Stia Vecchia and the Borgo di Stia. The noted jurist and man of politics Bernardo Tanucci (1698-1783), Court Minister to Carlo di Borbone and then valuable adviser, to Ferdinando V, was born in this area. During the last war the entire town underwent destruction, raids and reprisals, the most grave being that of April 1944 in the Vallucciole zone which provoked more than one hundred victims. 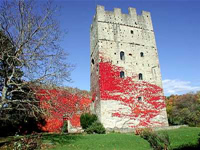 Porciano Castle
The historical memories about Porciano goes back to the 11th century, the castle is named on a year's 1017 document as residence of the Count Guido di Teudegrimo, founder of the branch of the counts Guidi from Porciano, so we can consider it as one of the first settlements of the powerful Casentinese family. More than two centuries after, in the year 1288, was the famous Count Tegrimo that, here retired after the Campaldino battle, attacked and stole the unlucky wayfarers and merchants that passed in the proximity's of the castle. Of his 'noble art' exists testimony in a 1291 sentence against the Count: he have to pay 10.000 gold florins to the Podesta (medieval term for chief magistrate or governor) of Florence to have stolen at a merchant of Ancona. The successor of Tegrimo was the Count Guido Alberto of Porciano, also condemned by the Florentine Republic to have plotted in a conspiracy to upset the same one. In March 20th 1349 the castle passed under the dominion of Florence, having the last Count of Porciano, Ludovico, suit the monk's abit abandoning all his terrestrial richness.
The greatest surviving keep in the whole Casentino.
As to many other places of this area also on Porciano exist a lot of memories, even if you don't historically proved, regarding the great poet Dante Alighieri. The legend says that in year 1311 Dante was brought for the first time in Porciano to convince the Counts of the Guidi family, that opposed for a long time the Florentine Guelphs, to support the just crowned Emperor Arrigo VII and to convince him to take openly side with the Ghibelline cause. From Porciano departed two famous letters written by the poet. The first one, March 31st 1311, destined to the Florentine, full of resentment and hate after the exile to which he was condemned, with the purpose to invite them to submit to the emperor. The second, the 16th April of the same year, to the emperor to push him to crush with the weapons the same Florence. But the Counts Guidi didn't keep the promises of fidelity done to the Emperor, and the poet immortalized his contempt for the traitors in the XIV° chant of the Purgatory of the 'Divine Comedy'. This caused the revenge of the Guidi family that imprisoned the Alighieri in one of the halls of Porciano. Another legend that concerns the castle is related to the presence between its walls of a treasure, a gold bell that 'it is worth how much the whole Casentino'.
The western tower.
The mighty Keep of Porciano, still gifted of battlement, is the greatest of the whole Casentino with its 35 meters and six plans of height. It is raised between the rests of the fortified walled enclosure, two towers, the western transformed in bell tower of the church of the little town and two gates, one to north and another to south. The downfall of the castle began in the 16th century in contemporary with the growth of the town of Stia, placed at the bottom of the valley, much more comfortable for the commerce. The ruins of the fortification also knew the shame to be destined to agricultural use. As the near castle of Romena, also Porciano became in the 19th century ownership of the Counts of the Goretti dè Flamini family that took care of its restoration. On the site were also done archaeological researches that have allowed to reconstruct the phases of development of the castle. It's now possible to see the complex system of canalization of the waters that were served to flow from the roof of the keep to the principal cistern sited in the court of the castle and in a small misure inside the same tower for drinkable use. After the last works, finished in 1978, the ruins results well kept and today have been opened to the public, the tower also entertains an apartment, residence of the owners, and a small museum of the things recovered in the area.
Looking today at this castle of small dimensions can seem impossible that in the Middle Age its importance was so notable. The 'court' of Porciano was frequented by knights, noble and ambassadors, the deriving merchants from the east had to pass under the walls of this castle to approach towards Florence and an Emperor confided in its alliance to subdue the powerful Florentine Dominion.