The history of Subbiano is closely linked with that of the Arno on whose left bank the town developed. 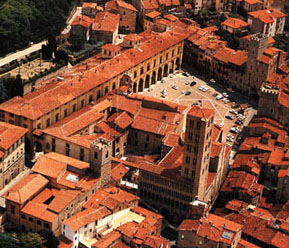 The history of Subbiano is closely linked with that of the Arno on whose left bank the town developed. There are still today, remains of numerous water mills built along the banks of the river. From the south can be seen the tower of the castle which looks out over the river. In September there is the Grape Festival which is not just a popular festival but also an occasion for tasting typical local products and to discover the history and popular traditions of the town.

The castle, placed in strategic position at the entrance of the ample Casentino Valley about 10 kilometers away from Arezzo, rises above the inhabited area of Castelnuovo (New Castle) di Subbiano, and it is considered the most important and meaningful testimony of a fortified installation in the area. Its name must be interpreted in relationship to a preexisting construction called Castelvecchio (Old Castle). 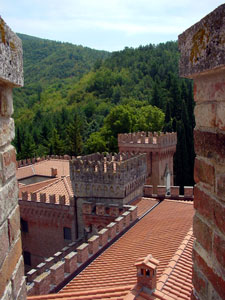 A document of 1022 A.D. testifies to the existence of this fortified settlement, called at the time 'Vico DI Sesto (sixth)' because it was it corresponded to the sixth military stone of the road to Arezzo, as ownership of the abbey of Saint Flora and Lucilla of Arezzo, to which it stayed in possession up to the XIII° century. It seems that around the year 1200 the Aretinis destroyed the small fortress and then the Benedictine abbot provided for its reconstruction. Since that time the castle was called Castelnuovo.

During the communal wars the castle was conquered by the Florentines and surrendered during the fief to the noble Della Fioraia family that maintained it in the following centuries. The fortification is characterized by a high and thick square tower crowned by machicoulis and surrounded by an ample rectangular reinforced enclosure. The enclosure's western side still preserves traces of the primitive medieval construction. The whole original plan has been object of numerous transformations during the years that followed. The heaviest of which happened in the 17th century, when the castle was practically transformed in the actual villa. Besides the already named tower, also reconstructed, the element that remains largely unchanged from its medieval character is the inner court, partially renewed in neo-gothic style. Also the gate, called 'Porta Vecchia', is well preserved is well preserved and the coat of arms of the noble families of the area can still be seen in the walls on its sides.