Terranuova Bracciolini is the last of the terra murata, built by Florence, still conserves the old wall and the towers from its foundation. 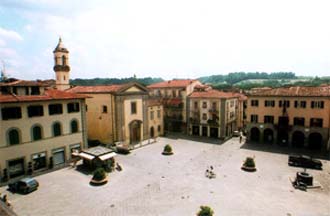 The last of the terra murata , built by Florence, still conserves the old wall and the towers from its foundation. Originally called Castel Santa Maria, it owes its change of name to the great Humanist of the XV cent., Poggio Bracciolini, who was born here in 1380. Frescoes from the XIV and XV cent. are conserved in the Chiesa di San Biagio ai Mori. Terranuova was also the birth place of Frà Diamante, di Feo, collaborator of Filippo Lippi, who was born around 1430. Of great interest is the view of the Balze which rise up to a point above the small village of Persignano. Traditionally, there is an Antique Fair held every second Sunday of the month (except in August), held in the squares of the historic centre.

Sights of interest of Terranuova Bracciolini

Arcipretura di Santa Maria
The church, dating back to the XVIII century, contains a polychrome terracotta Pietà from the workshop of Giovanni della Robbia (XVI cent.).

Chiesa di San Biagio ai Mori
The church, built in the middle of the XIV century, stands inside the ring of the wall. It has a single aisle and has conserved most of its frescoes from the XIV and XV cent.

Riserva Naturale Valle dell'Inferno e Bandella
The Nature Reserve Valle dell'Inferno e Bandella extends for about 526 hectares and includes the comuni of Terranuova Bracciolini, Pergine Valdarno, Laterina and Montevarchi. The vegetation is very varied and, depending on the zone, is composed of woods of turkey oak, English oak, willow, black poplar, common oak and holm oak.

Le Balze
The area extends along the Valdarno slopes of the Pratomagno for a total of 2,372 hectares and includes the comuni of Terranuova Bracciolini, Pian di Scò and Loro Ciuffena. The morphological nature of the territory is made up of gullies and crags which have created a landscape of particular fascination and environmental interest. Of particular note are the Piastri di Poggitazzi e Piantravigne .