The first historical records referring to Torrita di Siena date back to the 11th century when the name appears in an Amiata legal code of the year 1037. 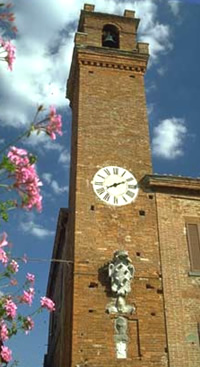 Torrita di Siena has exploited its position at the hearth of the Valdichiana transforming its economy from an agricultural base, at one time the sole activity of the population, to industry and crafts. Small and medium-sized businesses grew up quickly around Torrita , mainly dedicated to wood products, increasing the potential of a small but hardworking community. The first historical records referring to Torrita di Siena date back to the 11th century when the name appears in an Amiata legal code of the year 1037.
At the beginning of the 13th century it was a castle under the domination of the Republic of Siena which held it for successive centuries despite the attempts by Montepulciano to take power. An advanced guard of Siena and because of its strategic position, Torrita suffered numerous attacks before becoming part of the Grand Duchy of Tuscany.
In 1554 it was definitively occupied by Imperial troops whose coat of arms (the lion with three spears) was fixed to the tower of the Tower Hall in place of that of the Medici.
Other than Ghino di Tacco (of the Monaceschi Pecorai family – nobles of La Fratta), who according to what was written is to be regarded as a "gentlemanly rogue" and who still today is subject to a great deal of contrasting interpretation, Torrita di Siena was the birthplace of Fra’ Jacopo da Torrita, famous for his restoration of 13th century mosaics.
Torrita di Siena (325 m) covers a territory of 58 sq km and has population of 7,000.
Other than the main town which comprises the historical centre and a modern extension lower down, the village of Montefollonico is worth noting, a former medieval castle which still contains interesting traces of its past and is surrounded by a truly beatiful landscape. 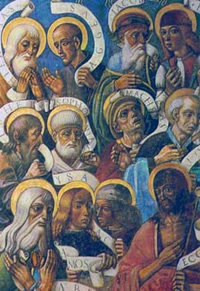 ART:
The original centre was situated on a long ridge, closed within the remains of old fortified walls dating from the beginning of the 13th century and continuously repaired after the numerous attacks suffered. The fortification was crowned with nine square towers on which ramparts were placed in 1528 according to the design by Baldassarre Peruzzi.
The square stands at the centre of the cross-shaped town where its three towers epitomize the three powers: military (the castle tower), civil (the Town Hall) and religious (the church of SS.Flora and Lucilla).
Civil and religious constructions worth noting are:
THE CHURCH OF THE MADONNA DELL’OLIVO:
situated on a hill facing Porta al Pago and formerly known as church of S. Costanzo, this is the odest church in Torrita. It was already in existence around the year 1000 though some historians maintain that it was built on the ruins of a temple dedicated to the goddess Ceres.
Over the centuries many changes and restorations have taken place.
THE CHURCH OF THE MADONNA DELLE FONTI A GIANO:
situated on the road linking Torrita di Siena with Sinalunga, this church was built in 1665, shown in a Latin inscription, in memory of the miracles which took place near the image of the Madonna delle Fonti found on the remains of an eternal spring.
Architecturally it respects the style of the late 1500s and early 1600s.
It has the shape of a latin cross and has three altars.
THE CHURCH OF THE MADONNA DELLE NEVI:
built outside the town walls in 1525 following a vow made to the Madonna when the population of Torrita was threatened by a serious plague. Almost certainly built on the site of an oratory and containing paintings attributed to Girolamo di Benvenuto.
THE CHURCH OF SS. FLORA AND LUCILLA:
together with the Town Hall, this church forms the oldest part of the main town square.
It is in the romanic style with a single nave and an impressively worked facade with a number of ornate brick decorations. The church contains paintings by Benvenuto di Giovanni, Bartolo di Fredi and pupils of Sodoma.
PALAZZO COMUNALE:
the actual Town Hall of Torrita located in the main square next to the church of SS. Flora and Lucilla. The architectural design of the building and its tower date from 1200 but many changes were made in subsequent centuries.
It was formerly the Palazzo Pretorio (magistrate’s office) where the Podestà and officials of the Commune of Siena resided from 1266.
Adjacent to the Town Hall stands the theatre "Degli Oscuri" whose name is derived from the Academy which founded it in 18th century and whose crest is visible on the front facade.
MURA E PORTE (WALLS AND GATES):
there are four access gates to the historical centre, three of which of even older origins.
In particular the gate of Porta a Gavina is made of wood from the 13th century, while the Porta Nuova was opened in the west wall in 1800.
THE CHURCH OF S. CROCE:
built in 1642, it has a red brick facade and a baroque interior with three altars, the main altar dedicated to the crucifixion.
THE CHURCH OF S.MARTINO AND S. COSTANZO:
the parish church, built around 1631, becoming a Collegiate church in 1648. It contains a bell from 1454 and a late baroque organ.
THE CHURCH OF THE MADONNA DEL ROSARIO:
the church stands in the middle of a new residential area. It is built in a modern style and contains valuable ceramic pieces of art, mosaic glass windows and a wooden crucifix on the main altar.

Montefollonico
The longitudinal layout of the town is accentuated by the spindle-shaped town square, with the church of S. Leonardo facing it at an angle – a spatial solution of an unusual kind in the Valdichiana anf in Italy.
Following the line of the walls we find seven fortified towers and three entrance gates to the town: the PORTA DI FOLLONICA, DEL TRAINO and DEL PIANELLO which represents an example of military architecture of the 14th and 15th centuries.
THE PALAZZO PUBBLICO or Palazzo Pretorio is from the year 1200 and was the seat of the Palace of Justice where the local governing body used to meet.
THE CHURCH OF SAN LEONARDO is one of the most important examples of romanic architecture in the Siena region. It is built of local stone. The splayed arch portal is interesting wifh its column fascia and sculptured capital bases.
Inside, its single nave contains valuable wiorks ot the 13th, 14th and later centuries.
THE CHURCH OF THE TRAINO withits part stone part brick structure dating back to 1609 is situated outside the town walls and from its excellent vantage point dominates the valley below.