The medieval village of Trequanda, crowned by the remnants of the ancient Cacciaconti castle, stands a hill 462 meters high sited between the Val di Chiana and the Val d' Asso.

The medieval village of Trequanda, crowned by the remnants of the ancient Cacciaconti castle, stands a hill 462 meters high sited between the Val di Chiana and the Val d' Asso. The real origin of the settlement is shrouded in the dark like the one of its name, even if some historians attribute to the mythological Etruscan hero Tarkon [ Tarconte ] because is probable the Etruscan frequentation of this place. To the mistery on Trequanda history strongly contributed the fire of the aretine archives of the 1384 that contained the documentations concerning this territory. Is however probable that already before the year 1000 the castle was governed by the counts Cacciaconti della Berardenga, family of noble Frank origin, sure they were the lords of this lands during the first half of 12th century.
The position of Trequanda, at control of the road that from Siena passing through Asciano carried to Chiusi, attract the sights of the powerful Sienese Republic. Siena didn't miss any opportunity for interfere in all the controversies regarding the village. But the inhabitants were not happy of these interferences and opposed resistance until Trequanda become one of the bases of the rebellion against the Guelph government of Siena. In the 1289 Siena definitively overpowered Trequanda and the castle risked to be shaved to the ground in order to prevent future uprisings. Around 1330 the Cacciaconti sold the castle to the Franzesi of Staggia and seven years after the new owners donated it to Siena. Already in 1313 all the territory was under the direct control of the Sienesi.
This was the period of maximum splendor of the village, completely encircled by crenellated town walls with irregular shape, with five towers and three gates, joined to the main round tower of the castle, located at the vertex of the hamlet. Of the walls remain insufficient traces, mainly recognizable on the northeast side, while of the three gates the 'Porta al Sole' and the 'Porta al Borgo' are intact, completely disappeared the 'Porta Buggea' that was located just under the castle.
The castle, with trapezoidal shape, was seriously damaged during the second world war and don't remain many traces of the original construction. The great round tower was reconstructed. Part of the circuit walls with traces of a second square tower are still recognizable. The complex is private property of a bank.
In Trequanda deserves of being named the parish church of the Saints Peter and Andrea, dating back to the 13th century. It is a beautiful Romanesque-gothic construction with a particular facade covered with white and ochre color stones forming a geometrical chessboard pattern. 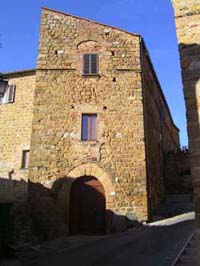 Petroio
The first owners of the landed estate of Petroio were the noble Berardegna and Scialenda families. Along with a number of other fortresses it fell to the Municipality of Siena in 1197 that, "had taken up arms against them because, with the help of the bishop of Arezzo, they intended to betray their friendship even although they had become citizens of Siena" (Tommasi , Storie di Siena , lib. 3, p. 173). Towards the end of the 14th century the estate was owned by the Salimbeni and Piccolomini Bandini families. It later returned to the jurisdiction of Siena until its fall in 1555. Approaching the town, on the outskirts of the city walls, is the church of S. Andrea, site of the old hospital.

After passing the old terracotta factory there is the ancient Romanesque church of San During the 11th and 12th centuries this church, that was formerly part of the parish of Santo Stefano at Cennano, belonged to the Vallombrosani monks in the form of a monastery, and was subordinate to the abbey of S. Andrea of Ardegna. Travelling along the road, Palazzo Pretorio appears on the left-hand side, which is destined to become a terracotta museum and is presently undergoing renovation. Slightly further on is the church of Ss. Pietro and Paolo in the square bearing the same name. Inside the church are a number of paintings by unknown artists of the 17th and 18th centuries. Amongst the works is an oil painting by the Sienese artist Rutilio Manetti (1571-1639), representing the Ascension with Seraphs and Saints. A panel painting depicting the Madonna and Child is the work of the Sienese painter Taddeo di Bartolo (1362-1422) and a further panel painting by the Sienese artist Francesco Vanni portrays the Virgin and San Domenico. The road ends in close proximity to the municipal tower and the 12th century quarter-deck once home to the Cacciaconti family and then later to the magistrate of Siena. At the top of the main stairs there is a statue of Bartolomeo Garosi known as "Il Brandano" (Petroio 1486 - 1554) who was famous for his prophecies dating from the time of the fall of the Republic of Siena. He liked to call himself 'il pazzo di cristo'. Today, as well as being "The capital of terracotta", Petroio welcomes tourists from all over the world. Here they can try traditional recipes which have been handed down from one generation to another and taste the excellent olive oils and wines produced in the area. They can also admire the typical Tuscan landscape as Petroio is ideally situated between the Val di Chiana and the Val d'Orcia.