The archaeological findings testify the presence of man on the islands of the Tuscan archipelago since the prehistoric era .

From the Prehistoric era to the Etruscans
The archaeological findings testify the presence of man on the islands of the Tuscan archipelago since the prehistoric era and the Neanderthal man called “musteriano” lived here already 50000 years ago, except for the islands of Giglio and Giannutri which were colonised only 7000 years ago. From the Roman Period to the “signorie”
From the 16th Century to Napoleon
Today and the Penal Settlements 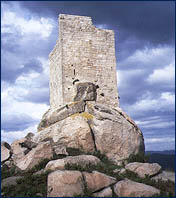 The findings made on the islands of Elba, Capraia, Gorgona, Pianosa and Montecristo reveal that the inhabitants did not navigate. This could seem strange, but is comprehensible if we consider the fact that there were no island at that time. Elba, Capraia, Gorgona, Montecristo and Pianosa were a long peninsula which broke up in small islands during the Neolithic era, becoming the Tuscan archipelago. About 2000 years B.C the “rinaldoniani”, navigators and warriors arrived to the islands from the part of Bolsena. They knew how to use metal and invaded the islands in search for copper mines. Still today, in the Cave of San Giuseppe in Rio Marina on the island of Elba, we are able to see the places used to bury people and there are about 50 skeletons preserved here. On Pianosa there are some artificial wells which were built by the rinaldoniani.
During the period which proceeds the rise of the Etruscan civilisation the Ligures and other peoples from south of the Apennines probably visited the archipelago, but it is only when the Thyrrenians come that the islands begin to be part of the history and the closeness to civilisation. The Etruscan came to Tuscany around the VIII century A.C. and extended their influence of their culture and civilisation without using their force and wars.The Etruscans were refined artists, knew about astronomy and hydraulics, founded big and important cities, were used to luxury villas and created a writing alphabet and mathematic signs. It is during this period that the exploition of the mineral resources on Elba and Giglio starts which gave the Etruscan the iron necessary to manufacture goods. But as the centuries went by, the underground mineral extraction on the biggest islands of the Tuscan archipelago served other purposes than the simple need to manufacture precious ornaments, such as the economical consolidation and the political expansion. As the Greeks rammed and sacked the Etruscan ships full of precious metals, the Etruscan decided to transport by land through Lazio and Campagnia. This is how the famous “iron road” is born and that guaranteed that the iron got from Populonia to the Middle East in less than one month and along its course, also opened the way for the culture and civilisation of the Thyrrenians. After that the Etruscan together with Carthago had defeated the Greeks, the iron road became even longer thanks to the integration of Corsica, and the Tuscan mineral arrived to the north of Europe.

Geography, Morphology and Climate
Apart from Pianosa, which morphology is well indicated by its name, all islands of the Tuscan archipelago are mountainous with an irregular coast-line with mortises, sand bays, creeks and inaccessible cliffs which have been modelled by the blustering winds and strong waves. The morphologic characteristics of the Tuscan islands come from their volcanic origins which have given the island of Elba a top that is more than 1000 m high, the Capanne mountain, which today completes the tourist program and allows the visitors to alternate relax on the famous beaches with adventures along the paths on the steep slopes of the mountain and extreme sports such as free climbing. The rivers and the fountains have always supplied the inhabitants and the agriculture with water, apart from Giannutri which is completely dry.
The climate of the Tuscan islands is extremely mild, subtropical and therefore characterised by warm summers and very humid winters. Rain falls irregularly and during there is often long dry periods during the summer, while it is possible to see the highest tops covered with snow which melts after a few hours during really cold winters. The winds, especially on the small islands, are useful for the dissemination and the homogenisation of the vegetal species. It could be reason why there are plants from Corsica and Sardinia on the island of Capraia.

Geology - Minerals
The ground of the islands of the archipelago is definitely rich in minerals, a natural museum for curious and interested people and a “Mecca” for mineral scientists. The minerals have determined the economic and historic events of the archipelago, especially on Elba and Giglio, which are the islands with the highest quantity and selection of minerals.
If Giglio is famous for the elegant grey-green granite, rich in feldspar, quartz, mica and thurmaline, the island of Elba holds a high quantity of iron and has given it its most ancient name, Aethalia, which means “spark”, as those jumping sparks close to the ovens where the precious mineral was worked. The extraction and the working of the mineral started to become important for Elba from the beginning of the Mediterranean civilisation. The precious objects of the Etruscans and the more refined ones by the Italics were made with iron from the Elban mines. Then it was the turn of the Greeks who sailed the Mediterranean and knew that there was an island between Corsica and Etruria so rich in iron that it could never finish.
Obviously the reality is completely different from the legend and the last mine on Elba was closed in 1981. Though no more minerals are extracted and the iron is no longer forged, the minerals still are one of the most important resources of Elba.
Though spades and helmets are not forged anymore, the ground still attracts scientists and collecters. Bronze, azurite, malachite, cuprite, hematite, ilvaite, limonite, iron, magnetite, quartz, granite, orthoclase, beryl and thurmaline are the most common minerals, and the presence of these minerals makes the islands of the archipelago an open mineral museum that is so important that it is on UNESCO’s list over geologic sites. There is also a plan to create a cultural park in order to protect this unique treasure. Even if you are not scientifically interested in minerals you can still enjoy the great aesthetic and landscape effects that the minerals offer. If you want to explore the world of the granite, there is a quite difficult, but fascinating path, that starts in Borgo di San Piero, at the foot of Monte Capanne and ends at the Mulino del Moncione. Along the path, you can admire fascinating landscapes, as the one from Pietra Murata where you can see Pianosa, Montecristo and Corsica, and you can distinguish the typical vine-yards of Elba on the green granite and semi-worked block terraces, the remains of an activity which flourished already during the Middle Ages. The glittering colours, due to the presence of iron, characterise the north-west part of the island. It is the part that surrounds Rio Elba, the capital of the extraction. The path from Rio Elba to Fortezza di Giove, which goes back to the 14th century, passes abandoned mineral mines where the water is ochre and red. In Rio Elba you can also visit the Elban Mineral Museum “Alfeo Ricci” which hosts more than 700 examples that, together with the “Erisia Gennai Tonietti” collection in the Town Hall of Rio Marina which holds around 1000 pieces, completes the mineral panorama of the island. In Portoazzurro you are able to enjoy a particular experience visiting the a reconstruction of a typical Elban mine in a train for 250 metres. Historic findings, old machinery and a complete collection of typical minerals allow you to experience the daily life in a mine and to get to know the extraction techniques which are no longer used. Another interesting visit is the experimental park of old iron metallurgy, in La Chiusa, close to Portoferraio. Here you can see different types of old ovens which have been reconstructed in their real size, like the “Catalan” ovens, used by the primitive civilisations. It is basically a deep hole with stones on the sides. Or the high ovens which are ovens on the ground which were a later invention.

Nature and environment
The islands of the Tuscan archipelago, beautiful jewels in the middle of the sea, have a vast ecosystem. There are interesting animals and very rare endemic plants. The environment is of an inestimable scientific value, fragile and delicate, which must be considered with respect. The presence of man on the islands of the archipelago since ancient times has left important anthropologic, historical and artistic traces and designing the so typical profile of the islands of the archipelago, that is the mix of nature, culture and memory which is hard to find elsewhere. But man's hand, the new civilisations and the need to settle productive activities for the development of the human race have also left wounds on the beautiful but fragile territory of the Tuscan archipelago, changing the original flora and fauna. Nevertheless, this is the biggest marine park in Europe, founded in 1989 to protect the existing ecosystem, and offers shelter for the flora and the fauna and is a link between Corsica, Sardinia and the Italian peninsula.

The Tuscan islands are probably the most important corridor of the whole Mediterranean basin for the shelter given to many bird species on their way from Europe to Africa where they stop and build nests in the park. The Tuscan archipelago, that covers 60.000 hectares of protected water and 18.000 hectares of protected land, is the only park on islands, and the biggest protected water area in Europe. The target activity is to protect the existing species and enhance the reproduction, as it is not possible to turn back time and make those species come back that have already abandoned the territory. Montecristo has been a little bit more lucky, as it became a national park in 1971. Only researchers and small number of tourists in guided groups can access the island.

The water of Pianosa is protected since 1979 thanks to the foundation of a national marine park to protect the habitat. This means that coats cannot get closer than 1000 m from the coastline. All coasts of Gorgona are protected, part from a small strip around the port. The best seasons to visit the islands of the Tuscan archipelago are spring and autumn, and not in summer when the islands get crowdy, when with a bit of luck, you can see dolphins that try to follow the boats. Spring and autumn are the best seasons for trekking, with paths that pass the places of the old mines and allows you to discover the most suggestive landscapes of the islands. Or why not go horse-back riding, or ride a mountain-bike, or do some free-climbing on the cliffs next to the water from where you can see the birds flying around in the pretty sky. Another alternative is sailing, canoeing, windsurfing or diving to find the real treasures of the archipelago, the soundings. Or challenge the sky with paragliding, enjoy a relaxing day on the golf course where even beginners can find well equipped centres and teachers. There is also the possibility to do excursions with a kayak or to try to hit the mark with the arches. Just go to the closest agency on site for all necessary information in order to practice sports and to enjoy the nature, choosing the activity that best fits you.