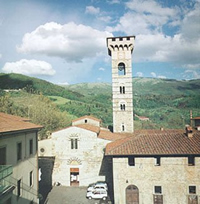 VAIANO
It is the most important town in the valley. Though the settlement was of Roman origin, the first important group of houses was built around the year 1000 near the "Badia". Thanks to the monks who already knew how to use the waters of the rivers to get hydraulic energy to power processes in the Middle Ages, the population of Vaiano have started to built millers, fullers, paper mills and founders since then.
In the 19th century Vaiano became an important textile town. In 1949 Vaiano is a separate municipality. The most important building is the "Badia di S.Salvatore" located in the center of the town. It is a vast complex which consists of a church (with very well-made fixtures, a 16th century painting by Butteri and a later one by Fidani), the former Monastery with its Renaissance cloister (that houses an interesting museum of archeology and religious art), and the beautiful, 40 meters tall bell tower built in the mid-13th century. The municipal buildings house the Center for Historical-Ethnographical Documentation of the Bisenzio Valley with a rich historical photographic archive.

Visit Vaiano
Abbey of St. Salvatore in Vaiano
The Abbey of St. Salvatore in Vaiano, whose original structure with three naves goes back in XII century, probably was founded by Benedettini monks from Cassino.
During centuries there were many modifications,some of them were removed in the '30s with the restoration.
In the middle of XIII century, the bell tower was erected in "alberese"and green marble (40 meters high).
In the following century battlements and wooden roofing were added. 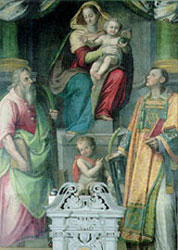 Vaiano Museum of the Abbey
The Museum of the Vaiano Abbey was opened in 1993 as a continuation of the exhibition of mediaeval archaeology, organized the previous year within the Laurentian Itineraries. On 29 May 1999, the Museum was reopened and completely renovated after thorough restoration works. The Museum will soon be completed by an important archaeological section, housing the finds recovered during the excavations carried out on the occasion of the restoration works of the architectural structure that are still in progress.
The organization of the Museum is such that visitors learn about and clearly understand the course of the monks' life in the Abbey and the religious, social and economic function of the Abbey within the territory. In fact, the leading subjects coming out of the exhibition path are the following: the choir and the choral prayer of the monks, the refectory and the monastic eating habits, the chapter-house and the economic structure of the landed and manufacturing properties, the abbot's apartment, the hospital and the care for wayfarers. This exhibition deeply evaluates the important aspect concerning the feeling of popular religiousness in its various forms of expression related to the past. After the necessary restoration works, a sixth room is being planned in order to house ornaments from other churches of the valley whose works, preserved within the centuries, are being constantly stolen.

Among villas and house-fortress
Villa Il Mulinaccio is a recently restored XV century building, which can accommodate events in a variety of formats: conferences, conventions, banquet... For further information, please contact the meeting manager.

Sofignano (400 mt) and Savignano (329 mt)
At the modest town of Tignamica, turn right and, after the bridge over the Bisenzio River, head for Sofignano. Situated along the slopes of the Calvana mountains, this zone of ancient settlement reached its peak in the Middle Ages as the seat of a parish church exerting control over a wide area. The Pieve dei Santi Vito e Modesto (the Parish Church of St. Vito and Modesto - about 1021) is one of the oldest parish churches of the area despite its major reconstruction works. Within a short distance from Sofignano is the medieval village of Savignano, birthplace of the famous sculptor Lorenzo Bartolini (1777-1850).

Schignano (460 mt).
From Figline di Prato a road leads to Schignano, a charming health resort amid pine and chestnut woods on the Javello mountain (931 mt).