Set amid green mountains rich in water and cool holiday resorts, the municipality of Vernio is the right place to take a break from pollution and noise and enjoy the silence of nature.

Set amid green mountains rich in water and cool holiday resorts, the municipality of Vernio is the right place to take a break from pollution and noise and enjoy the silence of nature.

Cavarzano (650 mt)
From Mercatale di Vernio, after the bridge over the Bisenzio river, a road on the left leads up to Cavarzano (650 mt), an ancient county castle in a dominating position, ideal place for excursions to the nearby mountains of the Bisenzio Valley. Continuing through the chestnut woods it is possible to reach the "Alpe di Cavarzano" (1008 mt), where the meadows have been equipped by the Mountain Rangers with picnic tables. 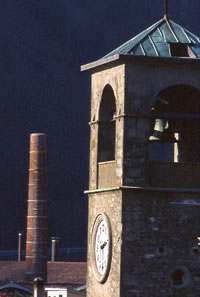 San Quirico di Vernio (278 mt)
After Mercatale di Vernio you reach San Quirico, chief town of the municipality of Vernio at the foot of the ancient Rocca degli Alberti (Alberti Fortress), now restored and open to the public on request. During the 13th century San Quirico was the most important fiefdom of the Alberti family, and then from 1332 of the Bardi family. The despotic power of the feudal lords generated many legends and traditions among the people that had to submit to it, the most important of which is the Festa della Pulendina that takes place the first Sunday in Lent and is attended by large crowds of people.
The festival of chestnut meal celebrates what was for centuries a staple in the diet of the population of the upper Bisenzio Valley, with other foods all based on the chestnut. The festival was founded by an ancient, very special association called the "Società della Miseria" (Society of Mercy).

Legend has it that the festival draws its origin from the terrible famine that followed the Sack of Prato in the 16th century, after which Count Bardi distributed his stores of chestnut meal to appease the hunger and desperation of the people. From the main square of the town visitors can admire the "Casone", the country home of the Bardi family, now the City Hall, the gallery and oratory of S. Niccolò, a charitable institution founded by Ridolfo de' Bardi.

Montepiano (700 mt).
From San Quirico di Vernio, follow the state road to the medieval villages of Sasseta (439 mt) and Luciana (529 mt), and reach the northernmost town of the Province of Prato, on the border between Toscana and Emilia: Montepiano, which has been a popular summer holiday resort since the end of the 19th century. Among the most interesting historical and artistic sights of this area is the Badia di Santa Maria (the parish church of St. Mary, 11th-12th century), with its unusual architectural structure in local stone. On the road to the "Badia" we pass the "Chalet dei Villeggianti", with its large rooms for exhibitions and events. Outside there are a children's park as well as a path around an artificial lake.

The fortress of Vernio
The fortress of Vernio, which gaves the name to this area, dominated an height on the inhabitants of San Quirico and Sasseta; now there are only little traces. However in this name Palazzo Comitale and the houses are included inside the castle.
What we can see today is only a part of the originary complex. It is the building that Bardi counts had adapted as residence and has forms of the fifteenth century.

BADIA DI SANTA MARIA
Near a little village of 18-19th C. houses rises an architectonic complex representing one of the most evocative historical and artistic evidences of the Tosco-emiliano Appennines. The Abbey was built in the 11th C. in the same place of the hermitage founded by Beato Pietro, who was venerated by the population for some miracles. His followers founded a small Vallombrosian monastery. The church preserves the 12th C. plan (apart from the transept, transformed in the 16th-17th C.) with the facade in local sandstone. The fine doorway is the most interesting part of the facade and is framed with moulding and portrays dragons with a cross in the middle and above them a decoration of vine shoots with grapes. In the lunette above, a praying figure between two trees, raising his arms to the sky is represented. The interior -featuring a high aisle with wooden trusses and transept chapels- preserves various works of art. On the right wall is an important group of frescoes of 1260-80 circa representing the "Natività", the "Annunciazione" and the "Arcangelo Michele". Worth seeing is also the impressive "San Cristoforo" by a florentine Bizantine painter. The inside portal's lunette shows a late 14th C. fresco, portraying a "Madonna col Bambino". From September to June, visit by appointment.