Set amidst vineyards and olive groves which produce excellent wine and oil, Vinci lies on the slopes of the Montalbano, a range of hills straddling the provinces of Florence and Pistoia. 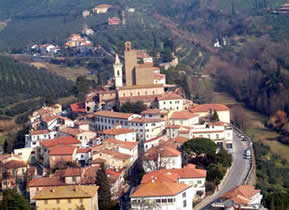 Set amidst vineyards and olive groves which produce excellent wine and oil, Vinci lies on the slopes of the Montalbano, a range of hills straddling the provinces of Florence and Pistoia. The town’s castle was built by the Conti Guidi in the first half of the 12th century. It fell under Florentine control between 1254 and 1273, and subsequently became a comune.
Leonardo da Vinci was born in nearby Anchiano on 15 April 1452, and spent his childhood here. Some of the town’s most atmospheric sights are associated with and evoke his universally recognized genius.
The original nucleus of the town was the Castello dei Conti Guidi, which once circled the top of the hill and had a characteristic elliptical form, still clearly evident. The stronghold with its tall central tower is what remains of the complex today. In the panoramic piazza behind the castle entrance there is a large wooden sculpture by Mario Ceroli (1987), an interpretation of Leonardo’s ‘Vitruvian Man’.
Just a short distance away, in Piazza dei Guidi, which was reconfigured scenographically by the artist Mimmo Paladino in 2006, is the entrance to the Museo Leonardiano: Palazzina Uzielli houses the ticket office and the sections of the museum devoted to building site and textile manufacturing machines, while the rest of the exhibits are in the Castello dei Conti Guidi – over 60 models of Leonardo’s machines, each one presented together with specific references to the artist’s drawings and manuscript notes.
Also of interest within the perimeter of the ancient castle are the Church of Santa Croce, housing a baptismal font thought to have been used to baptize Leonardo; and the Biblioteca Leonardiana, a documentation centre specializing in the work of Leonardo, which has facsimiles of all Leonardo’s manuscripts and drawings. 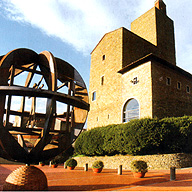 Below the castle area, on Via Montalbano, is the Museo Ideale Leonardo Da Vinci, a private collection of documents and reconstructions relating to Leonardo. In the central Piazza della Libertà there is a bronze equestrian monument (1997) by the sculptress Nina Akamu, inspired by Leonardo’s numerous horse drawings. And at the junction of the roads for Empoli and Cerreto Guidi stands the Sanctuary of the Santissima Annunziata, which has a fine Annunciation (c.1525) by the Pistoiese painter Fra’ Paolino.

From the centre of Vinci, an ancient footpath with panoramic views – known as the “green road” – winds its way through olive groves to the Birthplace of Leonardo at Anchiano. The building is a typical 15th-century Tuscan rural dwelling, and is where Leonardo was reportedly born on 15 April 1452.
Places of interest in the vicinity of Vinci include the Romanesque country parish churches of San Giovanni Battista at Sant’Ansano in Greti and the scenically positioned San Pietro a Sant’Amato, and the Church of Santa Maria a Faltognano. Leading up to the latter is a broad grassy terrace with a majestic, centuries-old oak tree that provides welcome shade in the summer heat.
More information: www.museoleonardiano.it