The characteristic element of the territory of Montignoso, already frequented by the ancient Liguri-Apuanis, it's represented from the Castle Aghinolfi. 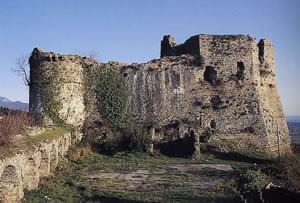 The characteristic element of the territory of Montignoso, already frequented by the ancient Liguri-Apuanis, it's represented from the Castle Aghinolfi, mighty fortification altomedievale, one of the most ancient Italian castles, set to defense of the zone and fortitude ever conquered.

The castle stands on an isolated hill, on the slopes of the Apuan Alps, to the left of the Tascio torrent.
The sea isn’t far and the fact that the castle overlooks the via Francigena gave it an important strategic role.
A document of the eight century proves that in the Lombard period, Aghinulfo castle stood here. Aghinulfo was probably a member of the Lombard court of Lucca.
In the late Middle Age the castle, although not continuously, was under the jurisdiction of Lucca, as Montagnoso was considered valuable for its position controlling the sea. Some renovation done on the structure probably dates back to this time.
Other significant modifications seem to date back to the fifteenth century and work also continued in the following centuries in a series of expansions and developments of the structures. 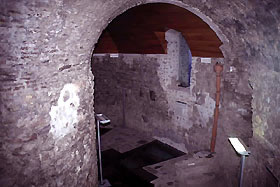 The last military occupation of the castle, with the relevant architectural modifications, dates back to 1945, when it was occupied by a Nazi garrison, becoming one of the strongholds of the Gothic Line.

The architectural complex consists of variuos elements: sturdy walls with towers encircling two large spaces at different heights: the uppermost space is occupied by the parade round, with a rampant walk supported by numerous arches.
There is also a keep consisting of a large building with an octagonal base (probably the oldest in the entire complex) joined to a circular tower (baluardo di San Paolino) by a wall. 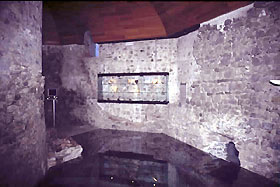 The octagonal building, dating back presumably to the twelfth century, seems to have been used for both military and residential purposes.

The complex layout of the castle and the numerous modifications applied over the years are the basis of the recent restoration, which aims at laying bare the different phases of construction using archaeological reading techniques on the different objects found as well as special planning solutions.