The Bibbiano castle was the property of the Longobard Count Guinigi di Reghinari at the time of Ludovico II. 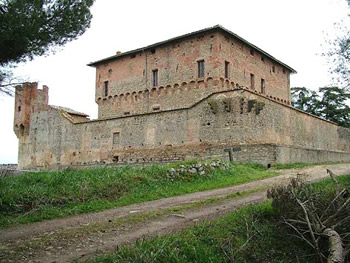 This fortified castle in Bibbiano dates back to the year 850
This castle was the property of the Longobard Count Guinigi di Reghinari at the time of Ludovico II. The name ‘Bibbiano’ comes from ‘Bibbio’ (in Latin ‘bibianum’), an aquatic bird similar to duck which used to inhabit this area.
The castle belonged to the Guiglieschis when, in 1051, Emperor Arrigo III gave it over to the protection of the Abbey of Sant’Antimo.
Bibbiano then passed into the hands of the Cacciacontis who, in 1197, gave it to the Republic of Siena. It was at this time that the castle was re-fortified. Further restructuring took place in 1338 and in 1400.
Despite being used both as a residence and as a fort, Bibbiano today still has the appearance of a classic medieval castle. Its quadrilateral walls are surrounded by a ditch, the main entrance has a drawbridge and two corner towers form part of the double defensive walls. An earthquake destroyed the top part of the central building in 1909 and was subsequently rebuilt