Casentino area lies along the Apennine ridge in Toscana and Romagna. Its woods are considered among the largest and the best preserved in Italy.

This protected area lies along the Apennine ridge in Toscana and Romagna. Its woods are considered among the largest and the best preserved in Italy, and house a rich variety of flora and fauna, such as wolves and golden eagles among predators, and many species of ungulates. The forests and a number of natural habitats of the area are rich in traces left by man during the centuries: by walking in the Park, tourists can see small villages with stone houses, mule tracks, and above all the two charming sanctuaries of Camaldoli and La Verna.
9 paths to discover the territory and nature of Parco Nazionale delle foreste Casentinesi, Monte Falterona e Campigna.
Going through the park; knowing its nature, its history, its sites through excursions.
Plants, animals, rocks, traces left by man are not always easy to interpret and understand. "Sentieri natura" aim at discovering the park by leading tourists through it and by letting them observe aspects which can tell them about the history of the park. In this way we hope that you will appreciate and respect the big natural heritage of the Park.
There are now 9 "Sentieri Natura". Each of them is provided with 10 rest areas on paths which can also be not very difficult.
Each path is described in detail in a brochure which can be bought in the Visitor Centers or ordered to the Park offices.
Going through "Sentieri Natura" with these brochures means to observe nature discovering aspects which are often ignored. However they are very important because they help tourists to understandthe history of these sites and how habitats Park are structured.

The Territory
The Park was established in 1993 and it covers a wide stretch of territory at the border of Romagna and Toscana. In Romagna, the mounain sections of the valleys of the Montone, of the Rabbi, of the Bidente, and of the Tramazzo are part of it.
Romagna
The Park's territory in Romagna is characterized by narrow valleys set between slopes which are at times rocky and at times covered by thick woods.
The Park's territory in Toscana includes, besides a small section of the Mugello, the Casentino, that is the territory of the high Valle dell'Arno, whose springs are situated on the southern slopes of Monte Falterona (1654 m.).
Toscana
The slope lying in Toscana is much sweeter, and it is furrowed by the valleys of the streams Staggia, Fiumicello, and Archiano, left tributaries of the river Arno which, in its initial part runs almost parallel to the main ridge.
Always on the Tuscan slope, the protected area goes on eastwards up to the suggestive calcalreous Mt. Penna, where the famous Franciscan Sanctuary of La Verna is situated.
The Forests
The heart of the Park is represented by the Foreste Demaniali Casentinesi, an ancient group of forests whose centuries-old shrewd management allowed the preservation of a wide area of forests of great naturalistic interest for their high level of integrity and their extraordinary richness in flora and fauna. These forests include the riserva naturale integrale di Sasso Fratino, the first one to be established in Italy in 1959, and that of the Pietra, together with other riserve naturali biogenetiche, which are still managed by the Corpo Forestale dello Stato (State Corps of Foresters).

Fauna
The Park's slope in Romagna includes thousands of hectares of territory - mainly owned by the Region - which in the last decades have acquired a considerable level of "naturality" because of the man's exodus and of the following reforestation activity. The wolf (Italian text) and the golden eagle have come back, and large populations of deers, roe deers, and fallow deers are only the most evident sign of a recovered ecological balance.
The Signs of Man
In the landscape, the signs of man have not disappeared, but they have been frozen by abandonment: houses, bridges, and mule tracks lead the excursionist at the discovery of a civilization, the civilization of the so-called "Romagna Toscana" which has its own particular features.

On the slope in Toscana, the environmental frame is completed by a submountain territory clearly influenced by the activity of man who shaped a landscape made of woods alternating with pastures and cultivated lands, parishes, hermitages, monasteries, the symbols of the whole region.
The Eremo and the Monastero di Camaldoli, the Santuario della Verna, and the natural environment surrounding them offer to the visitor the greatest emotions.
Acquacheta Waterfall
The waters of the Acquacheta hurl down a 70-meter drop, sliding rapidly down on the rock and at times throwing off the protruding arenaceous rocks.
In the plateau situated upstream the waterfall and originating from an ancient lake which silted up, there is the village of the Romiti, which was built on the ruins of the hermitage of the monastery of San Benedetto in Alpe. Here Dante found a shelter during his exile from Florence (in the XVI canto of the Inferno you can read a famous description of the waterfall).
In the San Benedetto - Aquacheta waterfall stretch there is now a "sentiero natura" called "La valle e la cascata di Dante" with the following features:
Total length of the route (outward journey): about 4.5 kilometers
Difference in height: 250 m
Walking time (including stops and return journey): 4.30 hours
When to go: from April to June and from September to November.

Ridracoli
This small village preserves a beautiful example of a humpbacked bridge which served an ancient palace, nowadays a hotel. Next to the hotel there is the Naturalistic Museum of the Bidente Valley. Following the valley upwards, you can see on a summit the ruins of a medieval castle, and further on you can reach the imposing dam, completed in 1982 to provide energy and water to the Towns of the plain in Romagna. Today the system is managed by "Romagna Acque". The basin of the dam, which flooded three small valleys, is framed by steep slopes carved by a number of little valleys, where arenaceous outcrops alternate with strips of land covered by trees.
Monastero di Camaldoli
It was built after the year 1000 as a hostel in order to replace the castle of Fontebuona owned by the count Maldolo, and it later became the monastery of the Camaldolensian monks. In the 16th century there was a printing house in it, where the "Costituzioni Camaldolesi" 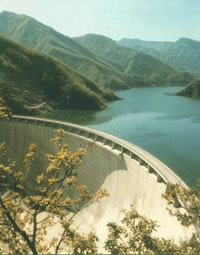 establishing the rules of the forest management were printed.
The cloisters and the Church of St. Donnino and Ilariano, with their beautiful paintings by Vasari, are wonderful works of art. On one side of the monastery there is the ancient chemist's shop with alembics, mortars, stoves, and precious manuscripts coming from the galenical laboratory of the monks.
In the surroundings there is now a "sentiero natura" called "Alberi e bosco" with the following features:

Campigna
The 18th century grand-ducal palace, which has been transformed into a hotel, was till the last century the hunting residence of the Lorena family. The head office of the local forest station, as in Camaldoli and Badia Prataglia, houses a small naturalistic museum open on request. Not far from it, a columnar stump of silver fir lies on the ground as an evidence of the majesty and the great value that the Campigna Forest had in the past.
In the surroundings there is now a "sentiero natura" called "L'abete bianco e le abetine" with the following features:
Falterona
The Apennine ridge, gradually rising from the East, is the main mountain group in the Park. One of the most suggestive paths to get to the top is the one leaving from the small and typical village of Castagno d'Andrea. Along the southern slopes of Mt. Falterona, at 1358 m, there is a rich spring called Capo d'Arno: here the main watercourse of Toscana has its origins. Eastwards there is a slightly grassy depression called Lago degli Idoli, a remarkable archaeological site where a number of Etruscan statuettes have been found.

La Verna
Situated in a defensive place on the steep southern wall of Mt. Penna, the famous Franciscan sanctuary has always been a destination for pilgrims: it lies within a silent and gloomy wood where the Saint spent most of his hermit's life. The calcareous nature of the mountain shaped its harsh morphology, characterized by a number of ravines and natural cavities opening up under the shadow of majestic maples, ashes, elms, and beeches. Some particularly suggestive places were chosen by the Saint and by the monks for their prayers. The mountain was given to St. Francesco in 1213 by the Casentinese count Orlando Cattani, who is today buried in the small church of Santa Maria degli Angeli whose building he supported. In September 1224, the miracle of the stigmata took place at the Verna. The event was recalled by Dante in the Paradiso and is still commemorated in a solemn festivity.

Typical Products
"Tell me what you eat and I'll tell you who you are" is an old say which has always corresponded to the people experiencing the many different realities of our country.
The Parco Nazionale delle Foreste Casentinesi, Monte Falterona, Campigna and the GAL L'Altra Romagna, in collaboration with Slow Food and Legambiente, want to promote the heritage of knowledge and professions linked to the typical and traditional products, which are the result of the millennial coexistence of man and nature. A research starting from the "Atlante dei prodotti tipici locali dei Parchi Italiani" which will be edited by Ministero dell'Ambiente - Slow Food - Legambiente, and Federparchi.
The reading of these pages aims to urge the rediscovery of the characteristic aspects of the territory which can be found in the products of the earth and in their processing activity. It is thanks to these methods that the culture of our populations preserved itself during the centuries, maintaining "endangered" traditions and ways of life.
The products
The "Gota", the "Marrone del Mugello", the "Melata d'abete", the Honey, the "Pecorino Toscano", the Peach "Regina di Londa", the "Raviggiolo", the "salsiccia matta" or "ciavar", the "tortello sulla lastra", the Romagnola race, the Chianina race.
More informations:
Seat: Via G. Brocchi, 7 - 52015 Pratovecchio (AR)
Tel.0575/50301
Fax 0575/504497
E-Mail: infosede@parcoforestecasentinesi.it
Seat of the "Comunità del Parco": via Nefetti, 3 - 47018 Santa Sofia (FO)
Tel: 0543/971375
Fax: 0543/973034
E-Mail: info@parcoforestecasentinesi.it