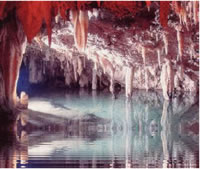 The Monte Corchia cave system in the Apuan Alps regional park is the largest cave system in Italy and one of the biggest in Europe. With five million years of geological history behind it, its over 60 km of galleries plunge 1200 m into the earth. Although exploration of the cave, the third deepest in Italy, began in the 1800s, it was only in 2001 that the public at large was able to admire the majestic columns of stalactites and stalagmites, the shields, hardpans and also the underwater formations such as the “cave pearls”. The work to provide access to the cave was carried out so as to respect the subterranean environment, which is extremely sensitive and delicate: by way of an example, the lighting system, consisting of diffused lights dotted along the trail, is regulated so that it only turns on when visitors pass through in order to lessen the effects on the underground world. In addition, there are three monitoring posts to constantly control the microclimate.

The Tour
Once you arrive in the village of Levigliani di Stazzema, a shuttle bus will take you to the entrance of the Antro del Corchia, created in an abandoned marble quarry, 860 m above sea level. Then you follow an artificial tunnel for around 170 m until you get to the actual cave entrance. On the right, looking as if it is checking who enters, is the “Gendarme”, a short, cone-shaped stalagmite formation. You pass through the “Galleria Franosa” (landslide gallery), and come to the “Galleria degli Inglesi” (English gallery). Here you can gaze upon the red, rust, white and brown colours of the formations: it is no coincidence that it was called the “Galleria dipinta” (painted gallery) before being named the “English gallery” in honour of the potholers who discovered it.

The silence of the mountain is broken by a small waterfall that falls from a tall chimney; in the “Galleria del Venerdì” (Friday gallery) an imposing stalactite is shaped like an eagle with its wings spread. We pass by the shallow waters of the “Laghetto del Venerdì” (Friday lake); and zigzag through the closely-packed fossil formations of the “Foresta Pietrificata” (petrified forest) until we come face to face with the natural marvel of the “Galleria delle Stalattiti” (gallery of stalactites). However beautiful, it is difficult to compare it to other underground milieus: there is a large pillar that looks as if it is trying to hold up the whole vault by itself. From the ceiling, the formations overlap and descend the walls to dive into small pools of water. 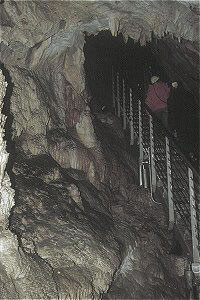 Opening times
Morning and afternoon. A calendar of the opening days can be seen on the web site www.antrocorchia.it; opening on request only on days not marked on the calendar.
Summer: also open at night.

Tour routes
There is a main route: 2h, 1978 m, medium difficulty.
In addition, two potholing tours can be booked (both 3h) in the “Galleria della Neve” (snow gallery) and the “Ramo del Fiume” (branch of the river); some of the technical equipment needed is provided by the organiser and included in the ticket price. 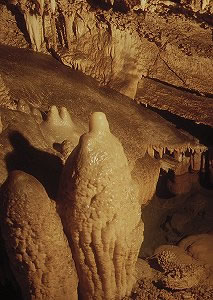 Useful Information
Photography allowed NO
Access for the disabled PARTIAL
This tour is not recommended for people who have mobility problems as the route includes around 1800 steps.
The cave has a constant temperature of +7.6°C, therefore we recommend that you bring suitable clothing (jumper, comfortable shoes); rubber-soled shoes and sweaters can be hired.